Although it’s because of some very serious reasons, it’s actually wonderful that we are currently witnessing revolting indigenous people occupy space in the mainstream news. It’s about time their issues and struggles be highlighted and receive the same attention that gets paid to other liberation movements, like the ones fighting against police injustice. This may be just the latest indicator that a revolution is certainly underway. And just like Trayvon Martin, Mike Brown, “Oscar so White” sparked a rise of Afro consciousness; the social media and mainstream news spotlight on mascot controversy, Columbus day, and now the Dakota access pipeline has created an opportunity for indigenous people to step out of their so-called invisibility and reclaim their cultural identity.

MCC’s American Indian Institute is a force on campus as well as the Mesa area, which has been dedicated to Indigenous representation and recognition. Throughout November, the group hosted four events to honor Indigenous Nations Month.  One of those included a showing of “Films highlighting revitalization efforts to defend the sacred.” With the help of students from the ACE and Hoop of Learning programs, MCC English professor Eddie Webb was there to present their documentary “Indigenous Identity in Border Towns.” The film shows how Native tribes across the nation are fighting to break through the borders placed on them through space(land), time, and language.

It begins by showing the San Carlos Apace reservation located in Southeastern Arizona. Like the situation in Standing Rock, the San Carlos people are in conflict with Senator John McCain, whose dealings with British-owned mining corporations threaten an area of land sacred to the San Carlos Apache tribe known as Oak Flat. Naelyn Pike, a well-spoken young woman from the San Carlos tribe, is upset by people who try to restrict Native people to reservations. “It’s the federal government’s land, it’s not ours,” Pike says of the reservation before comparing it to a prison. The issues with land are reflective of the physical but “artificial barriers” being placed on Native communities, preventing them from a full embrace of what is rightful theirs. The Another way is through language and time. American culture encourages Native people to forget about the past to which Pike response to this is that “the past is still with us.” 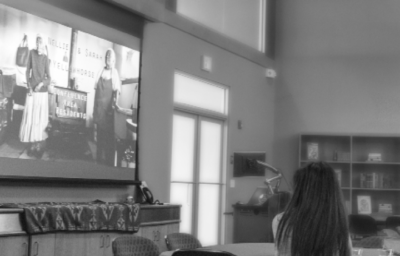 The tone of the event was set immediately after Rudy Smith, founder of “Can’t Fail”, shared how he supports his culture through his business while speaking outside of his clothing booth which was set up at the event. Rudy said he is proud of his native heritage but fears the possibility of current and future generations becoming completely out of touch with the languages, customs, and most importantly the history of indigenous peoples.  He said he considers his use of apparel as a way to appeal to the youth and to “get them interested in what  On one shirt in his collection, portraits along with a list of infamous warriors and chiefs appear under the label “Original Department of Homeland Security”.

It’s a clever fashion statement. One that provides a brief but straightforward history lesson for the youth, and everyone else who may have forgotten, or just always been unaware of the original inhabitants of this land and how it was taken from them. “A lot of times people think we are not even here, or nonexistent,” Liaison said. During the event, there was a sense that this is the key struggle of Native American people today: visibility.  The physical dislocation that occurred after possession of their land got translated into obscurity in terms of identity in popular culture. Left only with professional sport clubs to represent the face and spirit of their rich culture.  After giving details about the origins of the name, she said it’s a “derogatory term that didn’t come from us”.