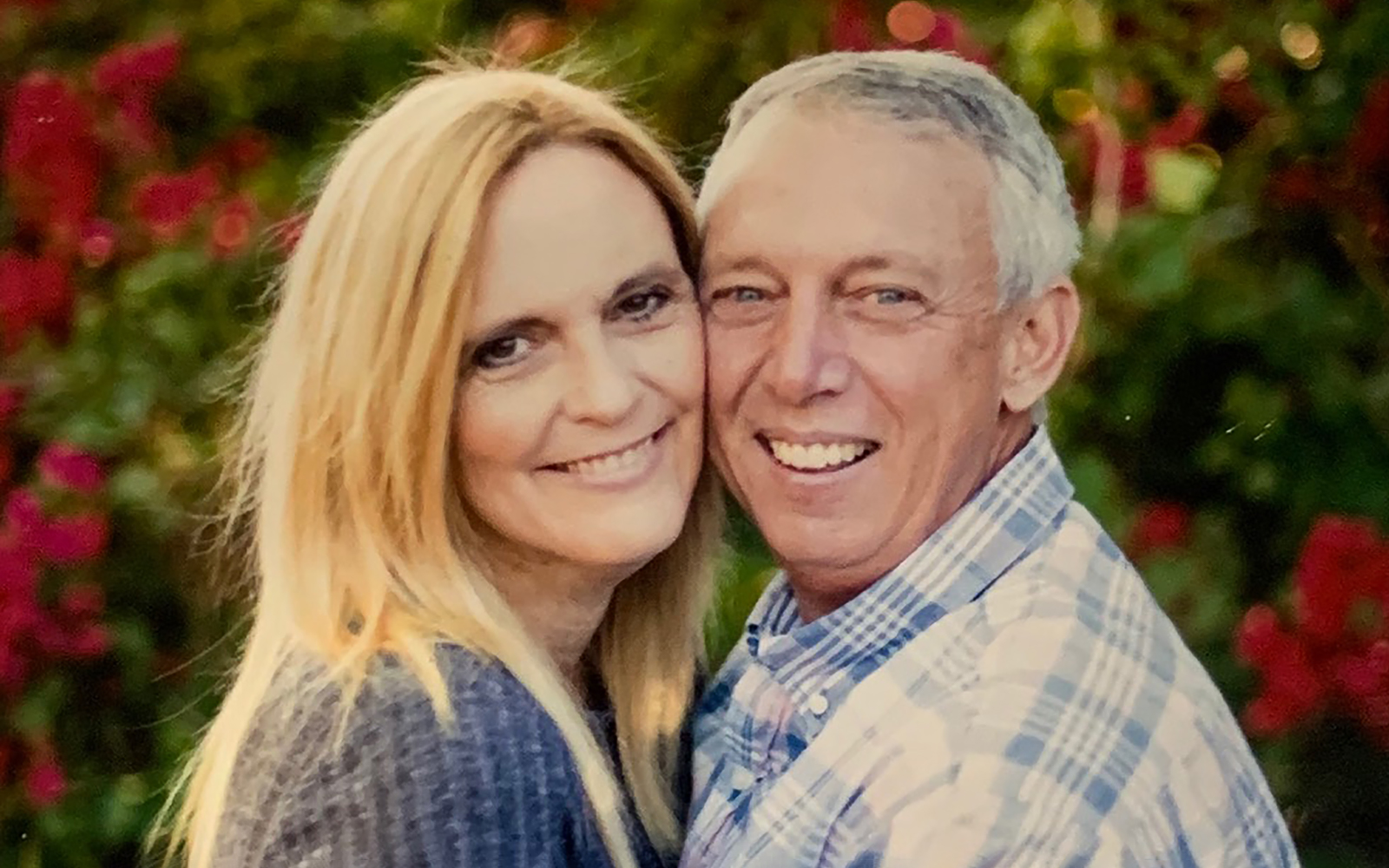 Susan and Richard Cluff pictured together Dec. 2019. With five daughters and one son, Susan joked, “ We literally could have had our own basketball team.” (Photo courtesy of Richard and Susan Cluff)

In 1984, a young Susan Blazzard started her journey at Mesa Community College (MCC), on a basketball scholarship. As a 17-year-old high school graduate, she never expected the basketball court to become the backdrop for her love story, one that has lasted 34 years and began at MCC.

At 4 p.m. every day, Susan laced up her high-top sneakers and entered MCC’s gymnasium to begin practice. Coincidentally, women’s basketball practice started just as Richard Cluff began his shift as a nighttime custodian assigned to the gymnasium.

Richard recalled his first memory of Susan: “I saw her on the basketball team, and after their practices, they would have to shoot baskets and free throws. Susan must have been a lousy free-throw shooter because she would have to stay late after practice nearly every day and work on free throws.”

For Susan, a certain custodian caught her eye from the beginning. The relationship started merely as a friendship. Susan admitted she was interested romantically, but Richard never asked her out.

The pair continued to get to know each other during basketball season, but their friendship stayed in the campus gymnasium.

“He would talk to me, but he would talk to a lot of the girls [on the basketball team]. The girls all thought he was really cute,” said Susan. “He has amazing blue eyes and he was super friendly and nice. Because he was friendly to everyone, it was really hard to tell what he was thinking. It was all very professional. I liked him, but he never asked me out.”

Despite beginning to date other people, Susan’s feelings for Richard remained. Seeing Richard was the only reason she played the second year of basketball at MCC.

Susan shared, “Coach Smith would have us do running drills at the end of each practice.  There were times when I would go home after practice and be sick. Toward the end of my first year playing basketball for MCC, I remember thinking I am literally throwing up for this guy and he doesn’t even know it.”

The second year Susan played basketball for MCC, she began dating someone she met in her biology class and didn’t stay after practice as often as she had in the past. This absence motivated Richard to ask Susan out on a date.

Richard admitted he was not very brave when it came to asking out women, but the idea of not having Susan in his life encouraged him to be brave. “I hadn’t seen her in a couple of weeks. We went from talking everyday to her not coming around at all,” said Richard. “So, I thought, ‘Oh, I am going to lose this one.’”

One day, Susan showed up to the gym wearing a nice dress, and Richard said that was the first time he had ever seen her not wearing gym shorts and a t-shirt. He was slightly taken aback seeing her out of a uniform and dressed so nicely.  He took a chance and asked her out.  She agreed to the date, and they quickly became a couple.

They had become such good friends during the first year Susan had played basketball for MCC that when Richard asked her out on their first date, his invitation sounded more like a proposal. Susan remembered Richard said, “I think we both know that this relationship is headed toward marriage, so let’s date for a while and see which of us is the better bowler.”

The year of friendship made for a very quick dating period. Two months after their first official date, Richard proposed on Valentine’s Day in 1986, and they married on June 14 of the same year. Thirty-four years later, the couple have six children who have all attended Mesa Community College. Their youngest child is a current student.

“A long period of time will pass before I go on the campus, and then it is a real blast from the past for me,” Susan said. “ Because even though [the campus] has changed a great deal and it has improved over the years, there are still a lot of places that bring back a lot of memories.”

Richard has worked for MCC for over 34 years and held several positions, ranging from night-time custodian to director of facilities.

“Basically, MCC is my second home,” Richard said. “It is where I met somebody, fell in love, raised children and the whole thing.”

“As a little girl I remember going to MCC to visit my dad at work. The highlight was always riding around campus in his golf cart. Everyone knew him and they would wave to stop and say hello. Dad loved introducing us to his co-workers.”

Allison attended MCC, earned her associate degree and transferred to ASU, where she earned her bachelor’s degree in design studies.

While Allison was an MCC student, Richard remembered, “Allie would only give her first name to instructors, because the instructors would always find out that she was Richard Cluff’s daughter.”

From golf cart rides and family picnics to Richard’s co-workers stopping by his home after he had a major surgery, many of the Cluff family’s fondest memories and family traditions have centered around the MCC community.

Richard, Susan and their family have remained active participants in the MCC community, attending sporting events, volunteering with Special Olympics and helping in The Rose Garden. They still have a strong love for each other and for MCC, where their love story began.

Kaylee Cluff
Kaylee Cluff is a journalism student at Mesa Community College in one of her final semesters. She is interested in writing human interest stories, features and civil involvement. She has enjoyed taking journalism classes and discovering her passions.

‘The Interview’ falls flat despite the hype

‘Go Set a Watchman’ is masterful sequel to ‘Mockingbird’

Kathryn Yslas Mesa Legend With every movie nowadays getting an obligatory sequel, it was only a matt
Read More