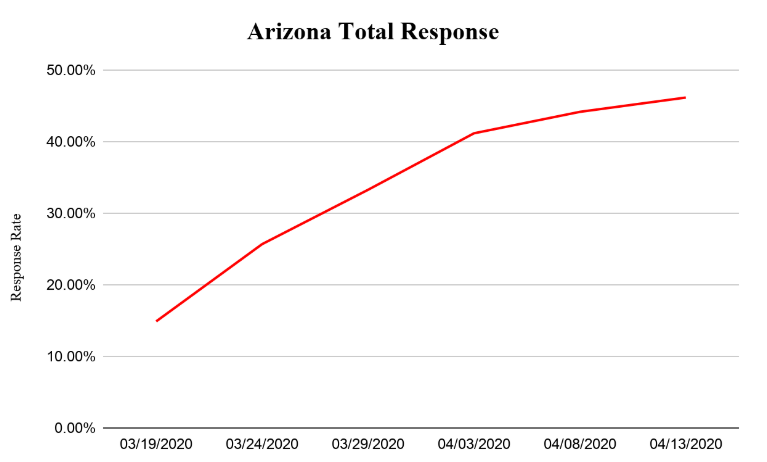 Data collected from the U.S. Census Bureau shows the self-response rates to the 2020 census. By Kierra Sharman

As the coronavirus pandemic continues, Mesa Community College (MCC) adjusts their efforts urging students and community members to pledge and complete the 2020 census.

Every ten years, the government conducts a survey of every living person in the United States. According to the U.S. Census Bureau, more than $675 billion in crucial federal funds was distributed based on previous census data.

A counted individual brings an estimated $3,000 to their state for federal funds like Medicare, public transportation and school lunches. For college students, the census directly affects the amount available for Pell Grants.

“After being involved I understood the impact [the census] had,” MCC census ambassador Maxwell Duford explained. “It drives businesses here, and you get entrepreneurs to come. The students benefit. If I’m attending school, the more money that comes in, the better.”

“It’s very important to be counted so that funding comes to the community, so programs are funded. Because if we don’t know you are there, we don’t know where to put the money,” said Debra Ohlinger, the MCC Center for Community and Civic Engagement program coordinator.

Census ambassadors previously attended local events like food truck night to get people to pledge and complete the census.

The submission deadline was originally July 31, but the coronavirus has delayed the timeline. In-person activities and follow-up interviews in low response areas have been pushed back until August. Final apportionment counts are scheduled to be given to Congress and the president by December.

PTK continues spreading census awareness through social media. They encourage MCC students to post their own findings of the impact census data has on communities and challenge family and friends to complete the census.

The survey consists of 12 questions and is available in 13 different languages. It can be filled out online, over the phone or on a mailed-in response form. The data is then collected and encrypted to protect the privacy of all respondents.

Only one person needs to complete the survey by counting everyone living in the household as of April 1st. This includes young children, roommates, friends, and family.