Mesa Community College Women’s golf vanquishes the competition again this season when they are out on the links. The ladies were out in North Phoenix at Wildfire, on the Faldo course, at the J.W. Marriott Desert Ridge resort. Faldo course is a Par 71 and 6016 Yards long for this particular event. The ladies are unbeaten this season and on par to take the Arizona Community College Athletic Conference (ACCAC) Championship, which is what they have done since the program returned to MCC in 2001, except in 2006.  Mesa Community College (MCC) played this tournament early last week Monday, Apr. 2 and Tuesday, Apr. 3. The course held an LPGA Founders Cup event recently and was still in professional shape for the ladies to competition.

Lady T-Bird Megan Fusak led, individually, after shooting a 78 in the first round. Teammate Haley Kapanicas held third position after the first round of competition.  Hannah 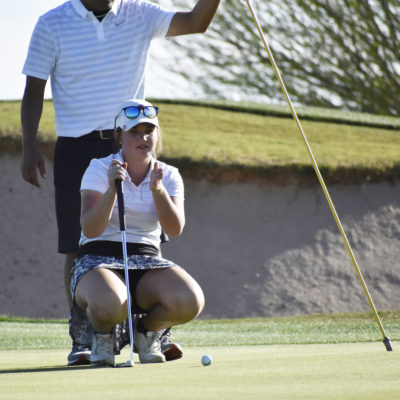 Brown finished the day in ninth for the first round. She felt she struck the ball well, but her targeting was off. The greens were also the most difficult part of the first round for Brown. Hole 16 was particularly difficult for Brown. Brown started out in the fairway off the tee and hit her second shot off to the left of the green. “It went left down into a sand, ditch area, was under a tree and unfortunately couldn’t get it out. So, I had to take an unplayable. I hit that one and landed in a drainage area that I got free relief from. It was a bad hole. I ended up taking a really bad score,” Brown said.  The ladies shot a combined first round of 342 to take the lead in the Paradise Valley CC Invite.

Lady T-Birds entered the second day with a 31-stroke lead over Chandler-Gilbert Community College. MCC would knock five strokes off of their previous team total and claim victory for the fifth time this season. Lady T-Birds were victorious by shooting a two-day team combined score of 342-337 — 679, 69-strokes ahead of second place Chandler-Gilbert.  Megan Fusak and Haley Kapanicas tied for the individual lead with Fusak shooting 78-81 – 159 and Kapanicas 82-77 – 159.  The Lady Thunderbirds had a short time between competitions as they competed again on April 7 and April 8 at Las Colinas GC in Queen Creek. The course will require accuracy as a housing community was built around the course.  Check out the athletic website to see how the ladies finished the competitive week.

By: Joe Jacqeuz With the Region I Playoff Tournament quickly approaching, both men’s and women’s T-B
Read More
10/25/2016

Kian Hagerman Mesa Legend Health and fitness are important for those who desire to lead an active, f
Read More