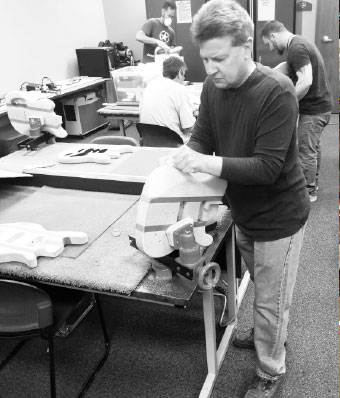 It’s safe to say that many of us may have at one point said we would like to learn how to play an instrument.  At Mesa Community College (MCC) you can do just that…as well as build one of your very own. ELE100 is a class where students learn to make an electric guitar.  Students are taught to design it, build it, and at the end you keep it.  “All levels and all ages welcome. The class is one day a week for three and half hours,” Palmerino Mazzucco, the MCC guitar-making instructor, said. That’s for a 16-week small class-size course of about 15 students. Muzzucco said he helps those who go through the course create a guitar that becomes part of their image. Much like the famous

guitarist Eddie Van Halen of Van Halen with his guitar “The Frankenstein” and Black Label Society guitarist Zakk Wylde and his famous guitar “The Grail”.  “I try to make really cool looking guitars that are different and none of them look the same,” Mazzucco said. Veryl Law is a student in guitar making class.  Actually, this is the third course he has registered for and said it’s become a personal passion for him.  “I don’t play guitar but I love to build them,” Law said. “I thought that I would want to build four.”  “I wanted to leave one for each of my kids as something their dad did for them,” Law said he has enjoyed the class so much that he has made eight guitars, with only a couple he has to finish.

“I just have become crazy about building something that is not only a work of art but is useful and sounds great,” said Law. Freelance musicians in the Phoenix area only make $44,000 a year, according to paysa.com.  Roberto-Venn School of Luthiery, guitar making and repair course in Phoenix, AZ has a tuition of $10,950 plus materials fees, according to the school’s website.  At MCC students pay for the 3-credit hour course, plus $225 material fees. “We are always trying to build something different,” Muzzucco said. “You know the next wow factor [like] a whammy bar or binding…and if you have a little extra spending money they can [get] a custom plate for the back or buy custom tuners.”  This class fills up fast and is among the most popular classes on campus.
So much so, that there is a two-and-a-half year wait list.  Mazzucco said he is currently trying to work on a program that will also teach students how to build acoustic guitars.