The MCC women’s basketball team beat Phoenix College and Pima College at home in Theo Heap Gymnasium to claim the ACCAC DII Championship.  The first game against Phoenix College took place in Theo Heap Gymnasium on March 7. The result was a 70-49 win in favor of the Lady-T birds. From there Mesa Community College faced Pima College in a tense game, that resulted in a win for the Lady T-Birds 74-72. 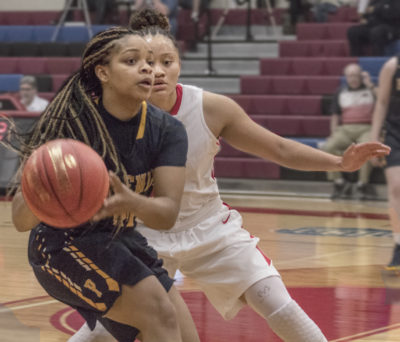 The Lady-T Birds didn’t let up and outscored the Bears 45-20 in the second half. The result was an impressive finish at 70-49. With this win the T-Birds moved on to play Pima, who beat Scottsdale, in the conference championship. The meeting would be the fourth time in five years these two have met in this game. No. 2 Pima College arrived ready to play but No. 1 Mesa College was ready too. In what turned out to be a nail bitter The Lady T-Birds beat the Aztecs 74-72 in Theo Heap Gymnasium.

The result of the game was a Region I ACCAC DII championship for the Lady-T birds.  It took two minutes for a team to score the first basket but from that moment on the game was a dogfight. Pima college made a quick jump shot and Mesa answered with two made free throws to bring the score to 2-2.  The game continued neck and neck with multiple ties until Mesa broke free on a small run pushing the score to 23-12 at the end of the first quarter.

The Lady T-Birds held the lead until the second half where the score was 46-29.  The second half was more of the same, the T-birds held their lead but the Aztecs attempted to fight back. The Aztecs narrowed the gap to 50-60 by the end of the first quarter but couldn’t take the lead.  Over the course of the final period the Aztecs did battle against the T-Birds, but the T-Birds retained their lead and narrowly escaped with last minute lay-ups by Anessa Glenn and Free throws by Tori Lloyd.

The buzzer sounded and the families rushed down from the bleachers. Allies Fuller climbed into the stands to hug her family. Head Coach Kori Stephenson reached out for her sons after sharing words in the huddle with her team. When the excitement settled, composure was regained and everybody got a piece of the net. Sham Troupe was named MVP of the game. She certainly deserves it for how hard she worked on the court. Other T-Birds also had stellar games. Quynne Huggins had a monster 8 rebounds. Tori Lloyd put up 11 points, seven assists and seven rebounds. Allies Fuller also put up 17 points, two blocks and four rebounds. 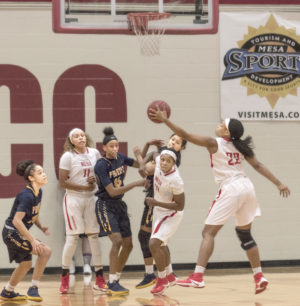 He went on to say, “We hadn’t won a national championship in 34 years and this program set the stage for the first one and then another one, and we almost won three in one year.” The Lady T-Birds will go on to play in the national tournament again. 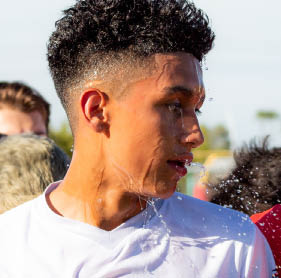 Mesa and Scottsdale Community Colleges were not the victors in their most recent match. The day was promising for a battle on the pitch between the two colleges with enormous puffy clouds in the horiz
Read More

Christopher Jones Mesa Legend We all know of stereotypes, everyone acts on them in some way or another; and for society, stereotypes are usually a burden. Assumed characteristics based on past actions
Read More