The Thunderbirds fought valiantly while on the road at Phoenix College, but had to chalk up a loss, a division loss to boot.
The first inning was full of action as three hits, a walk and a run were put up on the scoreboard. The Thunderbirds took the field with Holden Barnhardt, #20, on the mound. The first batter he faced hit a single to right field on a 1-2 count. The next batter was behind when he hit to Holden, allowing the runner at first to advance, but still getting the out.  Kody Funderburk, #16, committed an error when he misjudged a fly ball to shallow right, allowing the Bears to tie the game.  The top of the second was looking like a typical inning. The first batter grounded out to third, then a walk was issued, with a strikeout looking leaving one out in the inning.

Life emerged from the T-Birds and the pinch runner stole second. The shortstop for the Bears then bobbled a grounder, allowing the runner on second to advance third and the hitter was safe at first. The runner at first stole second for the second time in the inning. Second base misjudged a shallow fly to right that allowed in two runs. The inning was capped off by a second error that allowed runners to second and third, but they were not able to score before the third out.  The bottom of the second and top of the third went quickly. The bottom of third the Thunderbirds came away unscathed with the bases loaded, even with Coach Cirelli visiting the mound to talk with Barnhardt. 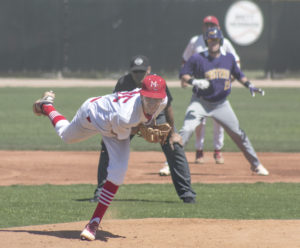 The bottom of the fourth was the inning that put the Bears in a position to win the game. Phoenix College started the inning with a 1-0 triple to center, followed by a walk. Coach Cirelli then made a pitching change and Barnhardt’s twin came in, Locke Barnhardt, #29. He had a 3-2 count and threw a wild pitch allowing the runner on third to score and the batter to advance to first. Barnhardt, #29, stayed in and had the hitter lay down a bunt to load the bases. A 3-run triple was then blasted to center, again. Locke was done after three hitters and Cirelli brought in Riley Grivette, #7, to finish the inning.

A two-run bomb to left center came in the bottom of the sixth by Ben Aklinski, #20, a guy the team struggles to keep off the bases. Cirelli said, “We tried to go in on him and left it out over the middle and he made us pay for it.” Aklinski hit one of the triples earlier in the game.  The Thunderbirds notched another run in the top of the eighth. Aklinski would come to bat and negate this run by belting another ball over the fence.  The Thunderbirds scratched and clawed the Bears, but the bird strikes were not enough to subdue the Bears power. Cirelli said, “We just couldn’t get that knock, we got guys on and we just couldn’t get them in. We get a knock here or there, that changes the ball game around a bit.”

Volleyball off to rough start of the season

By: Warren Younger After a long season for MCC, the T-Birds wrapped up the season with a title. It j
Read More