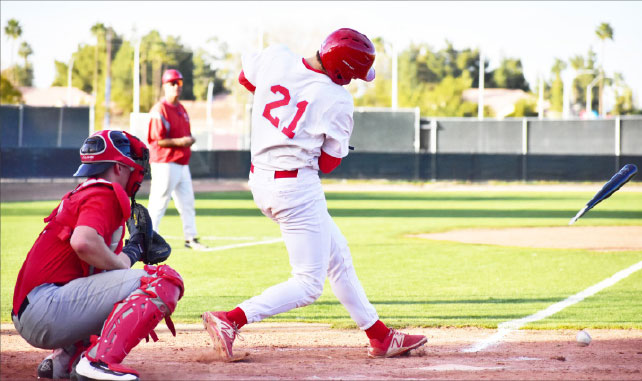 Six games remain in the 2018 baseball season for the Thunderbirds. Mesa Community College (MCC) is not finishing the season the way they began the season. The Thunderbirds are only a game over 500 for the month of April. Mesa was third in the Arizona Community College Athletic Conference (ACCAC) at the end of March and has slid to fifth with a record of 37-13. After the Arizona Christian game the T-Birds headed up the I-10 to Prescott to face Yavapai College for a doubleheader on April 7.  The first game would go to Yavapai, 12-1, and called after 6-innings to get ready for the regularly formatted game. The third inning was the break out in the first game with six runs put on the scoreboard. MCC would strike first in the second game by putting a run on the board in the bottom of the first.

It would look bleak again for MCC as the Roughriders attacked in the fourth inning scoring three runs, another two runs in the next inning. Mesa would get a couple runs to stay competitive in the sixth and seventh inning.  Infielder Joshua Brown began the eighth inning scoring with a home run. The T-Birds put up five runs to close within one of the Roughriders. They tied up the game in the ninth and went into extra innings and would prevail, 11-10 Number One South Mountain Community College was the next opponent for Mesa. The Thunderbirds would lose both games the Cougars, Game 1, 3-1, Game 2, 6-5.  The first game was difficult to score when the team had 11 strikeouts. The Thunderbirds fielded the ball well leaving seven men on base for the Cougars. South Mountain won the second game in the ninth inning.

A few days later, MCC was in the Tucson area to face the Aztecs of Pima Community College for another away doubleheader. They would split the games with the Aztecs winning Game 1, 7-4, and losing the second game, 7-5.  MCC baseball played Gateway Community College on April 17 and April 18 and won both games, Game 1, 9-8, Game 2, 8-2.  The stats are not on the school website for this game at the time of writing. The last three teams the Thunderbirds will face are Paradise Valley Community College, Scottsdale Community College, and Phoenix College before wrapping up the season.