The season is set to begin, as MCC’s theatre and film arts department will be performing the first production of the fall semester, “Alice in Wonderland,” beginning this week.  Directed by Jordan Deffenbugh, the play will tour local elementary schools, and is made with both young and old in mind.   Adapted from the well-known Lewis Carroll, the play centers around Alice, who stumbles upon a strange world inhabited by even odder characters. The play has been given a distinct, steampunk design. Both the actors costumes, the set and the puppets that wil be used have been designed to reflect the Victorian era in which it was written. 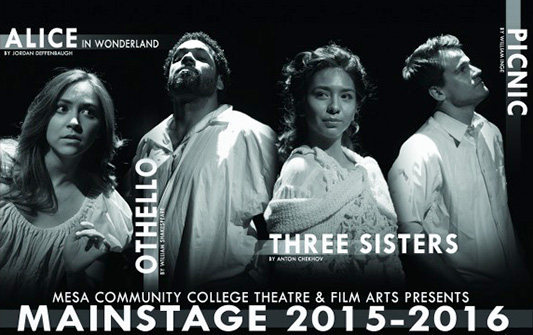 “Alice” is scheduled to be performed at the MCC Theatre on Oct. 16, 17, 22 and 23 at 7 p.m. and will have matinee performances on Oct. 17 and 24 at 2 p.m.  Following up the first production will be William Shakespeare’s classic “Othello,” a tragic tale of a Moorish officer misled and betrayed by his trusted subordinate Iago. Kevin Dressler, the faculty head of performance will be directing Othello.  The subject matter tackled by “Othello” is dark, and the themes distinctly aimed at a mature audience.  Violence and deceit, racism that is often blatant as characters seek to dismiss Othello as something less than themselves, are just some of the topics that the play addresses. “Othello” has many unique qualities not found in most plays one might see; the antagonist Iago is given more lines to perform than Othello, and Iago drives the action of the play through his scheming. Shakespeare’s script provides rich, fertile ground for any group of actors to work with, and offers a great deal to entertain audiences.

The MCC Theatre will also be tackling a few more plays this semester. Anton Chekhov ‘s “Three Sisters” will be the next production following “Othello” and “Picnic”, by William Inge, will close out the semester.  Evenings dates at MCC Theatre are scheduled for Dec. 4, 5, 10 and 11 at 7:30 p.m., with matinee performances on Dec 5 and 12 at 2 pm.
Tickets for performances can be purchased at www.purplepass.com/MCC or by calling the box office at (480) 461-7172.

By: Kian Hagerman The MCC Theatre will see an adaptation of “Rumpelstiltskin” grace its stage, in a
Read More
01/19/2016