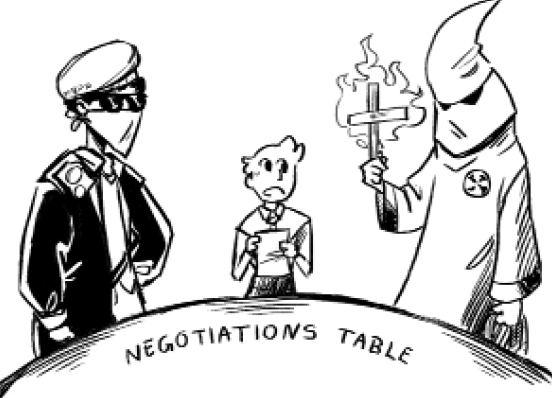 The extreme ends of political thought are becoming increasingly worrisome in recent days. Mainstream political parties are unfortunately embracing those with questionable intentions to furthertheir agenda of gaining power.
On the left groups like Black Lives Matter (BLM) and those that claim to champion the cause of the disenfranchised, often labeled “regressives” and “social justice warriors” are using increasingly extreme and destructive methods in an effort to achieve their goals are given a platform by Democrats. The same can be said of Republicans, where those labeled by their opposition as the “Alt-Right” are characterized as xenophobic and hateful, have been brought into the fold of the party to strengthen its numbers.

One might wonder how long it might be before those that hold such extreme views as those being bandied about on social media turn to action, the sort that could lead to tragic consequences.  As an example of the sort of dangerous rhetoric that can encourage violence to be used as a tool of social change, one only has to look at the history of Ireland and the Irish Republican Army. Or perhaps an integral member of the BLM movement; Shaun King has defended rioting as a means to an end, a tool to be used to further the social change he seeks several times. In an article for the New York Daily News King attempted to twist a Martin Luther King Jr. quote, an acknowledgment that rioting was a demonstration of dissatisfaction, into approval of rioting.

Further into the article he points out that the methods of Dr. King were civil protests, a far cry from the looting, destruction and violence of a riot.When King tweeted “I don’t say this as a threat, but America is just a little more injustice away from being like Milwaukee last night,” after the riots triggered by the death of Sylville Smith that was later found to be justified by the bodycam footage, we all must consider just how much worse things can get. When political candidates make race baiting remarks, like those Trump are accused of making, or those like Gov. Paul LePage’s now infamous quote “You try to identify the enemy and the enemy right now … are people of color or people of Hispanic origin” it is clear that aggressive posturing is not the sole purview of the left.

What will be the breaking point, where it becomes clear to the rest of us that something must be done? Allowing our country to become divided by hate is a clear path to the sort of suffering that was prevalent during the decades that the IRA reigned terror upon their fellow countrymen. Making some concessions and addressing the grievances of extreme factions may be distasteful, but if it can be done in a way that is reasonable and acceptable then a lot of bloodshed could be prevented That isn’t to say that every imagined sleight must be kowtowed to, or that common sense should be discarded. We all need to understand that the concerns people have are very real and legitimate to them, and if disasters can be averted by working together and seeking an equitable resolution than every effort should be made to successfully implement the changes necessary.

By: Michelle Chance Arizona has gone from passing a bill that would have made it legal to discrimina
Read More
04/01/2016