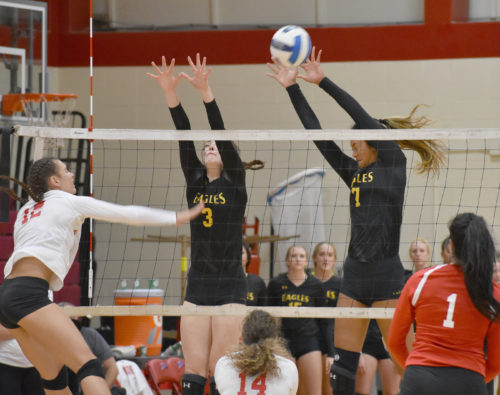 The Lady T-birds had their wings clipped by Division 1 College of Southern Idaho.  Southern Idaho was coming into the game with a single loss for the season.  Miami-Dade CC from Salt Lake City, Utah handed the Golden Eagles this loss in four sets. The Golden Eagles were ranked 4 in the National Junior College Athletic Association (NJCAA) headed into the National Tournament.

The Women’s Volleyball team has been having a productive year at 10-3 The College of Southern Idaho (CSI) arrived in the Valley of the Sun on Sept. 14 for competition against Phoenix College and won 3-0. The Golden Eagles had a couple of days off.  They played at 1 p.m. against the Scottsdale Community College Fighting Artichokes and K.O. them 3-0.
Their next target was our gymnasium at 6 p.m.

At 10-5 Mesa Community College (MCC) took a timeout to regroup and talk strategy.  The Thunderbirds played the next 13 points and took 5-13.  MCC had to call another timeout to regroup.  The pace of the match continued in the Golden Eagles favor and took the second set 25-17The third set was all Golden Eagles.  The Lady T-Birds never grasped the lead in this set.

They were gaining traction early and late in the set. During the final timeout MCC took, the coach spoke to the ladies telling them to hold one another accountable and everyone needs to push hard.  The T-Birds had to lick their wounds and head away from home to Yavapai College in Prescott on Sept. 20. The Roughriders handed the women their fifth loss of the season.
Glendale Community College comes to Theo J. Heap Gymnasium on Sept. 22. The Aztecs of Pima Community College are the following opponent on Wednesday, Sept. 27.

T-Birds come out ahead against Paradise Valley

Joe Jacquez Mesa Legend The T-Birds scored four runs in the second inning, and that proved to be all
Read More
04/15/2016

Mesa takes a hit in the ACCAC after a double loss