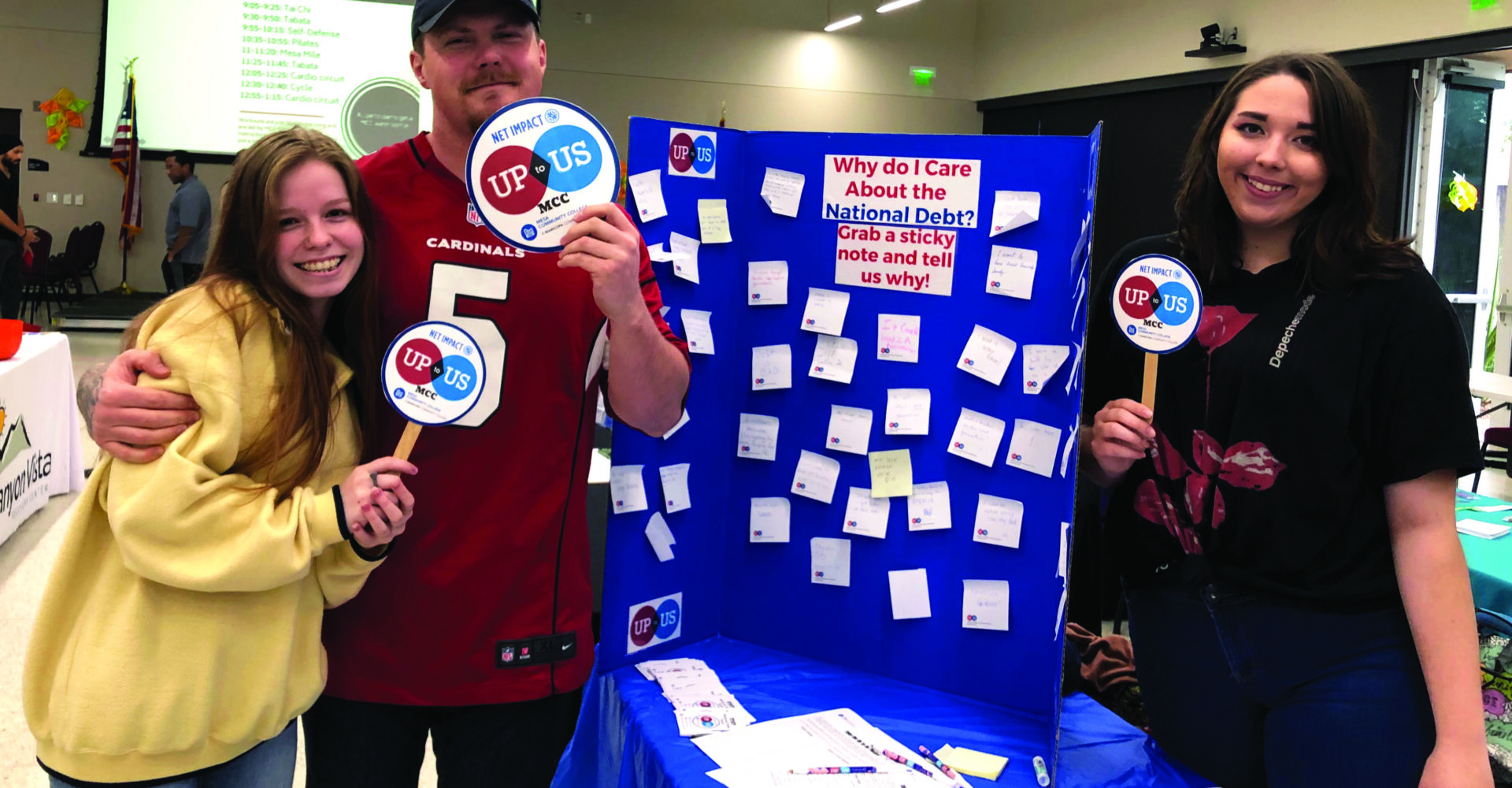 A nonpartisan group of students have begun to take on the U.S. national debt by participating in Up to Us, a nationwide debt awareness campaign sponsored by Net Impact. They compete against over 50 college campuses to spread awareness, promote civic engagement and increase conversation on the national debt. Up to Us was started by Net Impact, a national non-profit agency whose focus is on collegiate engagement in national issues. MCC participation began three years ago as a leadership initiative project of student Jacob Riddle.The club was then inherited by Racheal Mangini, who kept the organization going with just three participants. Today the club is run by its current leader Shelby Lynch, who hopes to elevate the MCC chapter to number one in the nation for engagement with around 10 people on her team. “We’re number four in ranking right now out of all the teams who are participating,” Shelby Lynch, Up to Us team leader, said. Student clubs and organizations like Associated Students of Mesa Community College, Student Life and Leadership and the Center for Community and Civic Engagement have assisted Mesa Community College’s (MCC) Up to Us branch in hosting national debt themed community events on campus. As the U.S. national debt rises above $23 trillion, the campaign calls for action to address the nearly unchecked government spending that has defined the U.S. for decades.

“Doing something like this as a student is interesting, because it makes you pretty aware of how many people don’t really know or care about these issues…,” Aaron Millet, Up to Us team member, said. “As a student, I’m already pretty concerned about debt, and I think both as individuals and as a society we all have a need to share this concern.” Up to Us is an awareness campaign and a part competition. Each chapter is responsible for gathering student pledges that do not require participation in extracurricular activities, but show Net Impact how well their chapter informs about the debt. As of Nov. 25, MCC’s chapter has processed 337 of 450 required pledges. “Up to Us has this pledge at their website… There’s like 20 something thousand of pledge signatures so far… All it means is that you support what we’re doing on campus. You support our efforts in trying to spread awareness, that we’re nonpartisan and we’re just trying to give students the facts,” Lynch said.

There are two primary events MCC’s Up to Us campaign are hosting this semester. The first,The National Debt House of Horrors, was a Halloween themed fun-house dedicated to comparing the spookiness of the holiday with the frightening truth of the national debt. This took place in October. The second is a skit called “The Year is 2032: A Parody on National Debt” which will take place on Nov 26. It will be one part comedy and one part informational in the form of a satirical presidential debate in which the candidates will discuss their idea for our indebted nation. “We are all young people who could be potentially affected by this in the future. Some people don’t really care and I’m like, you live in the United States. It affects you whether you think about it or not.”

Dec. 6 is the final day for Up to Us to report their progress to Net Impact. To fill out a pledge,
use MCC’s chapter link at http://tinyurl.com/TakeTheUpToUsMCCpledge.

Kian Hagerman Mesa Legend The MCC Theatre will be the host of the classic play “Othello,” the last production of the semester for the theatre and film arts department. “Othello,” known the world over
Read More

Kian Hagerman Mesa Legend October 2 is scheduled as the release date of a film adaptation of “The Martian,” a book written by Andy Weir and set on Mars.  The approaching release of the movie has renew
Read More

By: Warren Younger It has been awhile since we have witnessed a good “dark” anime series. Not since the cult hit Madoka Magica came out in 2009 has the anime scene seen an anime with a dark undertone
Read More