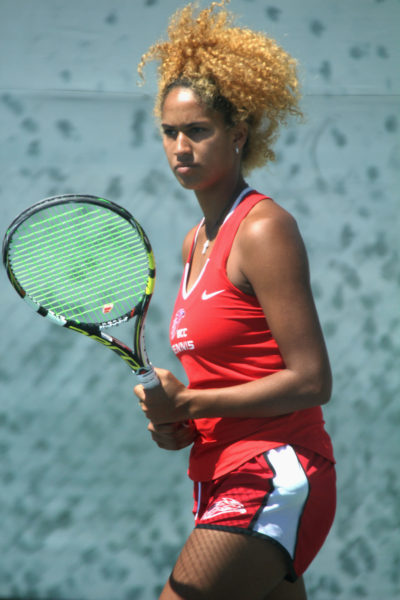 Both men’s and women’s Mesa Community College tennis teams continued their streaks and finished the season strong.  The men’s tennis team closed the regular season with a record of 11-5. They advance to the first round of the division 1 playoffs with a conference record of 6-0. The women’s team also had a successful season and they will advance to the division 1 playoff. The women’s team concluded conference play with a perfect record of 8-0 and an overall record of 13-4.

In the match against Glendale on Tuesday April 11 the Thunderbirds showed more of the same dominance they displayed all season. Both teams forfeited matches due to incomplete rosters but won their remaining 6 sets.  The women’s team failed to schedule for one singles match and another doubles match. Doubles team Naa Ankrah and Khanh Huynh won 8-0 against G. Mercado and A. Morales. MCC’s second women’s doubles team Yolanda Carlon and Julia Ortiz defeated Julia Hansen and Savannah Smith 8-2.

In women’s singles action, all MCC athletes defeated their opponents and all 5 who participated, Khanh Huynh, Naa Ankrah, Yolanda Carlon, Julia Ortiz and Hannah Nelson won their matches with a perfect 6-0 finish. The men’s team failed to schedule three matches heading into their game against Glendale. Two singles match and one doubles match went up for grabs but MCC won the remaining matches. Noel Maurin and Linus Holthey beat Andrew Arnold and Bryan Castanon 8-0. Matt fisher and Kim Donghyun had the same result in their doubles match with a perfect 8-0. 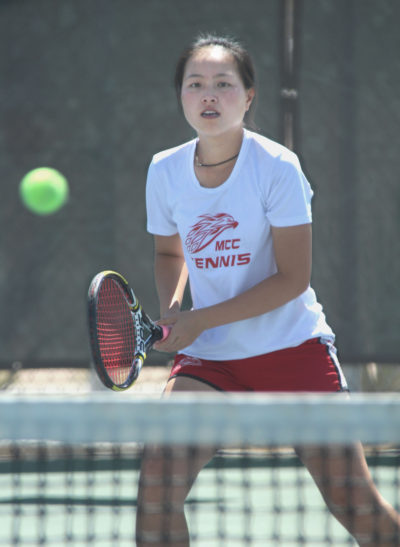 Felix and Holthey won their singles matches with two perfect 6-0 games. Donghyun and Fisher each one both their singles matches with 6-0 and 6-1 final scores. The men’s and women’s teams have both had trouble on the road this year and an away game has seemed to spell impending doom for the Thunderbirds win percentage. The women’s team owes half their losses to road matches and the men’s team owes all but one of their 5 losses too road matches. Hopefully this trend doesn’t continue to affect the thunderbirds as they travel to Glendale to close out their season.

One thing the Thunderbirds tennis teams have working in their advantage are the nationally ranked players on their respective rosters. The tennis teams boast 5 ranked players between them. On the Men’s team David Felix is No. 14 and Linus Holthey is No. 31. The women’s team has three ranked contenders heading to the playoffs Khanh Huynh is ranked No. 13, Naa Ankrah is ranked No. 32 and Yolanda Carlon is ranked No. 43. The men’s and women’s MCC tennis teams will both participate in the conference championships next week, 4/18-4/19/2017, in Glendale on the path to the NJCAA Division Championship.

By: Warren Younger The T-birds volleyball team kept it close but lost to Chandler-Gilbert Community College 3 sets to 1 as the fell to 0-3. MCC started off slow as the lost the first set 25-16 but pic
Read More

Special Olympics Arizona (SOAZ) hosted the bocce ball section of the Arizona special olympics at the Southern and Dobson campus on Saturday, Oct. 5. Over 100 athletes signed up to compete in this spor
Read More

Marcus Campbell Mesa Legend Students, Parents, and Fans could listen to a live stream of the MCC taking on South Mountain on both April 11th and 12th courtesy of T-Birds sports live. The Thunderbirds
Read More