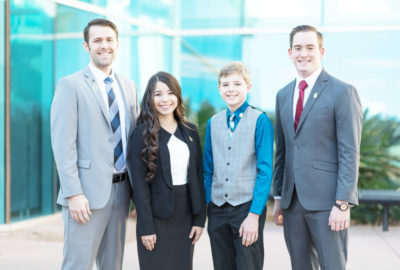 Two Mesa Community College (MCC) students were awarded more than $7,000 each in scholarship toward attending a four-year university. The award is part of the Phi Theta Kappa honors program that recognizes high achieving students in two-year colleges.  Johnathan Speakman studying Business Entrepreneurship and Jacob Riddle working toward an Associate of Science degree at MCC were selected from among thousands of submissions nationally.

Speakman and Riddle also received a $5,000 scholarship each from the National Phi Theta Kappa (PTK) Honor Society for being named as a member of the All-USA Academic Team. They were among the more than 150 students in the state who applied for the award. “I think that it just shows the caliber of our students and the caliber of our faculty and college,” Phi Theta Kappa advisor Duane Oakes said.

Speakman was also selected as the New Century Transfer Pathway Scholar for the state of Arizona, receiving $2,500 from that organization. The award is given to only one student from each state. He also received another $5,000 scholarship after being selected as a 2018 Phi Theta Kappa Guistwhite Scholar.

Phi Theta Kappa is an international honors program for two-year colleges and academic institutions. Unlike a club, PTK focuses on providing students opportunities for scholarships, it also supports and encourages the participation of public service. Through PTK, students are exposed to the thousands of dollars in scholarships available to support them as they transfer to a university. The MCC Phi Theta Kappa chapter has over 450 members. Since the founding of the MCC PTK chapter in 1966, seven students have been chosen to be in the All-USA Academic Team–the national program.

“I think that [this achievement] shows that our students are some of the top students in the United States, and it’s because their leadership, their scholarship and service,” Oakes said. “And if we can, as institutions, as faculty and employees, help empower our students to find their potential and find their purpose we could have hundreds.” To be considered for All-Arizona Team students must maintain a grade point average (GPA) of 3.5 or higher on a 4.0 scale, also be in good academic standing, working on an associate degree, demonstrate leadership, and be involved on campus and/or volunteer in their community.

MCC scholarship winners Speakman and Riddle both applied for the All-Arizona scholarship and were selected among the top tier winners. They were among the twelve Maricopa County Community College District (MCCCD) students selected to the All Arizona First Team who garnered $1,000. There were five students selected to the Second Team who obtained $750, and nine to the Third Team ultimately getting $500. “I think that [this achievement] shows that our students are some of the top students in the United States, and it’s because their leadership, their scholarship and service,” Oakes said. “And if we can, as institutions, as faculty and employees, help empower our students to find their potential and find their purpose we could have hundreds.”

These are a local level scholarship that identifies the best and most dedicated students in the state. Each school is allowed to nominate two students from each of their campuses, and all four students nominated by MCC were accepted in the academic team. MCC has had a decent upgrade from last years All-Arizona Academic Team. While MCC still had four students make an All-AZ Academic Team, only two made the First Team. This year, three out of the four entries were accepted into the First Team.

Max Manning is one of the twelve added to the First Team and was named as a Coca-Cola Gold Scholar. He will be graduating from MCC in the spring and plans to transfer to Arizona State University (ASU) to pursue an undergraduate degree in Zoology.  “I am going to [attempt to be on an All-USA team] but I don’t know if I’m going to get it,” Manning said. “The people who win are just amazing, so I don’t know.” These scholarships are a yearly award service, that means all MCC students who fulfill the requirements can apply for the scholarship.

The applications for the 2019 All-MCC team are available now to anyone who is interested in applying. “I just wish we could help students see the value in [Phi Theta Kappa] and I think [these students] brings validation for the hard work. They’ve spent hours doing amazing things,” Oakes said. “But more importantly I hope to empower more students to go out and do something cause there are so many awesome things people can do.”