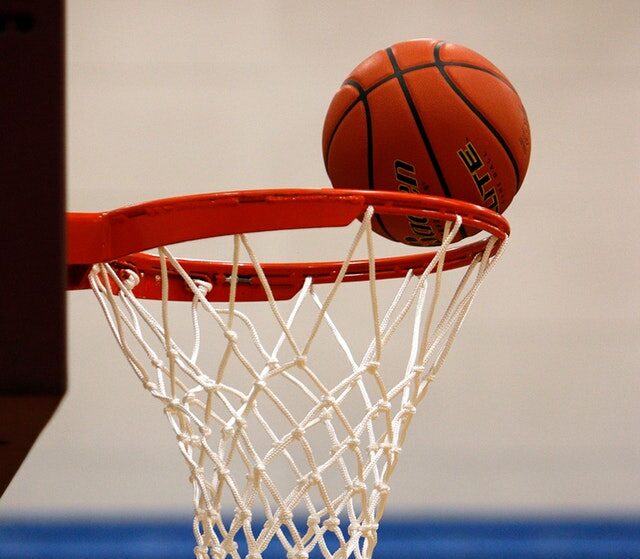 Last year, Mesa Thunderbirds head women’s basketball coach Kori Stephenson was named the Region I – ACCAC Coach of the Year, but you’d never hear it from her. Despite leading the team to at least the playoffs in all 12 seasons as coach with seven NJCAA national tournament appearances, Stephenson focuses on the student athletes, not the accolades. It’s in her recipe for life: be honest, work hard, and serve others.

“Personally, I don’t really care about that kind of stuff,” Stephenson said in her red-and-white laden office. Tens of group pictures of teams from season’s past plaster the walls, accompanied by basketball memorabilia, coaching resources, and newspaper clippings–”Lady T-Birds Region Champs.”

But the newspaper clippings speak not for her, but her pride for her athletes’ success. It’s the kids, she explained, who competed so highly. “Maybe with that award, [it] was a reflection of how the team did.”

Even with a humble perspective, it’s hard to ignore the success Stephenson and assistant coaches have achieved throughout her 20 years as Mesa Community College. Stephenson boils down her coaching philosophy to this: “I compete with passion. It’s pretty simple. Play hard with heart…to learn the game of basketball and play hard.”

That philosophy guides Stephenson’s approach to her team on and off the court. Each scored basket begins with recruiting high character kids and what she describes as building right relationships.

“Simply, just getting to know the person,” Stephenson explained. “Practice what you speak… It’s not rocket science here, it’s just really keep it simple, and doing–you know, live your life right… A right relationship is positive, healthy, encouraging, uplifting others.”

She continued: “And that’s why we’ve been successful. I’m serious! I’m serious. Like, it’s not as hard as I think people make it out to be.”

It’s simple, Stephenson repeats. Basketball and life don’t need to be over-complicated when a few principles can guide you. It takes hard work in an ongoing process, but showing up, listening and communicating go a long way.

And at the root of it all, Stephenson said, “I want you guys to enjoy college the way I did. ‘Cause it was fun… Obviously, pursue your career, you know, academics is first, but winning… it’s a pretty good medicine.”

Stephenson speaks highly of her college basketball career, where she experienced what every young student athlete going to college would want. Great coaches, great teammates, an involved community, and memories to last a lifetime–neglecting, of course, to mention her Hall of Fame career.

She tries to give the same experience to her athletes by keeping in touch athletically and academically. Study halls and grade checks are mandatory, and this year, Stephenson’s collected the calendars of every athlete.

“So, we kind of implemented daily calendars, so I can keep in touch a little, stay more connected with them on a daily basis, versus just waiting for every two weeks, or every three weeks for the grade check.”

Not only does she teach the team, but the team continues to teach her. After 20 years, Stephenson still strives to improve as a coach. It’s more than a calendar policy, but better communication and community outreach, from the team adopting a senior citizen home to simply asking questions.

“Every team, you know, even though I’ve been here a long time, I continue to learn from each team on how to become better,” she said. “The kids stay the same age, but I’m getting older, so I know that I have to… I just have to be more intune with what their language is.”

But Stephenson is not alone with each game won and each relationship built.

“It’s not me. You know, it’s not me! It’s a we thing here. And that–It’s all of us, is what makes this go around,” she adamantly explained.

Assistant coaches Sam Stevens and Ben Nelson are praised for their dedication and loyalty to the program and the athletes, something not common on other community college basketball staff.

“Make sure if you do say anything about them, they split, like I know, it’s a 3500 dollar stipend they split, and they work all year round. So I’m fortunate to have that, that staff.”
Athletics advisor William Young and strength and conditioning coach JoElyn Boone also play an important role in the team’s success.

Stephenson has dedicated herself to the sport of basketball, from growing up playing after her sister and watching the Lakers to helping her student athletes “fulfill their own little vision.” While celebrating the process of the sport, she teaches them not only how to be good basketball players, but how to be good people as well.

Whether in basketball or life, Stephenson’s pragmatic approach has led to a string of successful seasons for the Mesa Thunderbirds women’s basketball team. As the new season approaches, the coaches and athletes gear up for another round with nine freshman athletes and a fresh collective competitiveness.

Stephenson, alongside Sam Stevens, Ben Nelson and the rest of the staff, want to compete for the region championship and beyond.

“I mean, as silly as it sounds… the national tournament’s in Michigan, and that’s where my mother-in-law is. She’s 82, and she’s on my butt to get there,” Stephenson said.

No matter what, everyone, including coach Kori Stephenson, will continue to play hard with heart and, along the way, win.

Allison Cripe Mesa Legend Homecoming began at 5 p.m. at The Kirk Student Center with a reception for Mesa’s 18 National championship teams.  It was a celebration complete with snacks, a slide show pre
Read More

Stephen Peck Mesa Legend Mesa Community College (MCC) was lacking on the pitch this season. MCC Men’s and Women’s Soccer had a lackluster season outing for 2017. They both ended up with losing records
Read More