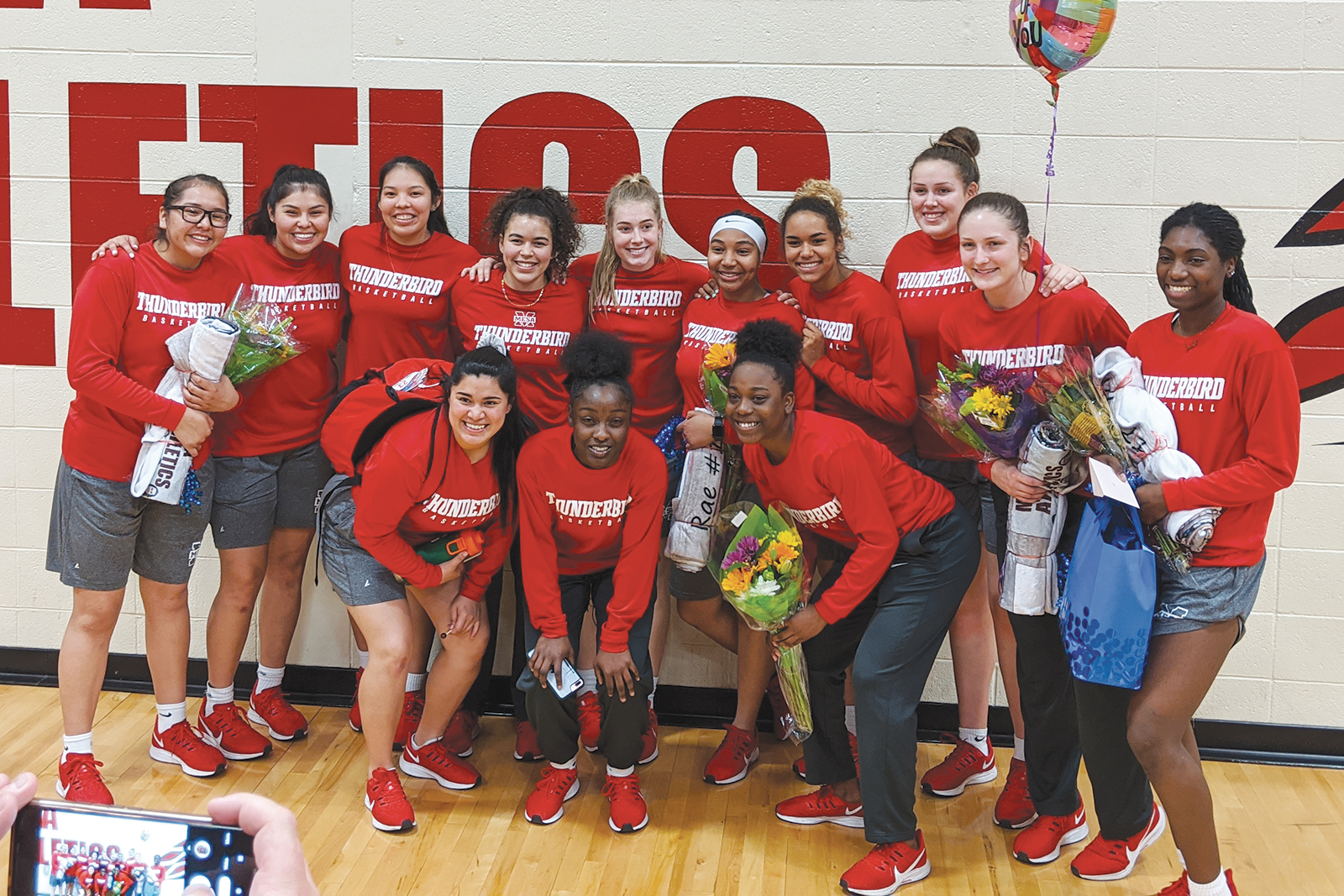 Graduating sophomores of the Women’s Basketball team were celebrated during sophomore night.

With the Region 1-Arizona Community College Athletic Conference Division II tournament starting on March 4,  the T-Birds will host every game including the championship if they can make it.

MCC head coach Kori Stephenson said her team got “very lucky” when they barely inched out a win against CGCC in late January.

Luck had nothing to do with MCC’s commanding win over CGCC. They never trailed; instead, a smothering defense caused 20 turnovers and eight steals, and a fast-paced offense gave the team their 19th victory this season.

“We were more prepared,” Stephenson said. “We had a better game plan, and our team was a little better focused for them, and we were just mentally more prepared and had a different mindset.”

The T-Birds wasted no time in showing who would be victorious. The CGCC Coyotes were met with a stiff but shifty defense by MCC in the first quarter. MCC had three steals off of CGCC’s first three possessions.

Freshman guard Zyan Smith’s three steals were a team-high for the night, and her 50 steals for the season puts her in the top 12 for steals in the ACCAC. Smith boosted her team to an early lead, scoring the first four points of the game. Her second score came off an outstretched steal, when she sped past her opponent and put in an easy lay-up.

The string of shots and a stonewall defense didn’t stop; it sustained until the Coyotes sunk in two free throws with only 4:47 left in the first quarter. By that time, MCC had a 12-point lead and went into the second quarter up 17-7.

Stephenson’s team went into halftime leading by 15. To keep momentum, she said she always writes on the whiteboard that the game is still 0-0.

“We just talk about having a lock in mindset and.. we just continue to preach defensive rebounds,” Stephenson said.

Freshman guard Myka Taliman in her seventh game as a starter kept the momentum with a triple-double, scoring 11 points and putting up 10 rebounds and 10 assists. This was the team’s first triple-double since Peace Amukamara in 2014, the same year MCC won the national championship.

Taliman returned to the starting line-up Feb. 15 following a 15-game hiatus as a starter. In her three most recent starts, Taliman has averaged 13 points a game. Taliman averaged 6.7 points a game before being put on the bench.

The green-and-black clad Coyote’s had previously overwhelmed MCC with their forward Bryar Tronnier. In their last meeting, Tronnier seemed to be the only player MCC couldn’t stop, putting up 20 points.  Stephenson’s team handled her much differently this game by applying a smothering coverage which led to Tronnier turning the ball over five times.

“We had more double teams come at her, and we had more help side defense come at her versus one on one matchups,” Stephenson said.

MCC will host their first tournament opponent at 7 p.m. on Wednesday, March 4.