Head baseball coach Tony Cirelli will be inducted into the MCC Hall of Fame as part of the College’s first ever ceremony to honor faculty, athletes, and alumni.  The ceremony, created as part of MCC’s continued 50th anniversary celebration, will take place this Thursday Nov. 5 in the MCC Theatre on the Southern and Dobson Campus. The event is free and open to the public, and it will feature a reception at 6 p.m. followed by the awards ceremony at 7 p.m.  Coach Cirelli, who will receive the coaches award, was initially surprised about how he was nominated for the Hall of Fame. “I was really surprised,” Cirelli said. “I think the coolest thing was I was nominated by a former player, so that I was a really neat thing for me.”  After he finally had a chance to really think about what this meant, he was very fortunate and humble. “There have been so many great coaches at MCC over the years,” Cirelli said. “Just to be put up in the same mention as those guys is pretty special.”

Cirelli played baseball at MCC in 1981 as a third basemen, and joined the coaching staff at MCC as a infield coach in 1985. In 1995, Cirelli was named the head coach, and he has been in that position for the last 21 years. During his time as head coach, Cirelli has piled up quite the resume making him worthy of this award.  What most remember him for is the 2014 national championship season.  That season was the best in school history, as the team compiled a 52-13 record and entered the National Junior College Athletic Association (NJCAA) World Series as the number 1 ranked team in the nation. The T-Birds backed up that number 1 ranking ultimately resulting in the school’s first national title in baseball since 1972, and it meant a lot to Cirelli. “I feel so fortunate to have been involved in a national championship team,” Cirelli said. “That’s the pinnacle of your career, and most people chase it and never get it.”

The T-Birds had come so close in previous years, and because of that the support his team got from former players made even more special. “I couldn’t believe all the alumni that were following us. I told all the kids that this isn’t all about you. You’re playing this for all the old T-Birds.” Cirelli currently sits atop the all time school baseball wins list with 753, and his 2006 team finished 44-21 good enough for a number 1 national ranking.  He credits his success to his players commitment to discipline“Sometimes we don’t have the best players,” Cirelli said. “I think it’s the discipline and work ethic that we bring.” His approach of taking it one day and game at a time has never changed even with this announcement. “We always talk to the kids about just playing one game at a time,” he said. “I try to stay in the moment. You look up and it sneaks up on you, and I’m going wow, 31 years is a long time.” 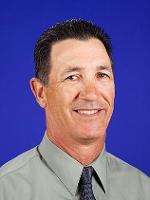 Cirelli has been named ACCAC Coach of the Year three times, and just in the last 19 years since Cirelli has been with the program, more than forty five MCC players have played professionally.  Cirelli’s impact goes beyond just the game of baseball.  He has inspired and been a mentor for many people about how to be successful in life.  Assistant Coach Douglas Rose who has worked with Cirelli for the past 19 years is most impressed by his positivity and how he inspires people to be better people.  “He has taught me a lot about baseball of course, but he teaches the kids about how to be better people and good husbands and wives,” Rose said.  “He teaches them about life.” “He runs the team like his mom ran his house,” Rose said. “Be honest, be on time, and work hard; he has had a lot of influence on a lot of people.”  “There is a lot of people that owe a lot to him in being successful in their regular careers,” Rose says.

Matt Mosca, a lefty pitcher currently a sophomore at Mesa, was a redshirt freshman on the national championship team and had nothing but praise for his ‘skipper.’ “Skip knows how to bring a team together as one better than any coach I ever had,” Mosca said.“He made me mentally tough and he’s shown me that to get what you want in life you have to get after it everyday.” Cirelli told me that he wants to continue coaching as long as his body holds up.“I still enjoy what I do everyday,” Cirelli said. “I am really lucky to get up everyday and go to the ballpark.”

Some called to the game while others born to play

Joe Jacquez Mesa Legend The sport of baseball has always been in Nick Ohanian’s blood: something he
Read More
03/07/2017