Mesa T-Birds finished the game vs. Pima with a score of 41-27, an impressive win against Pima Community College which is currently ranked No. 12.   On Sept. 6, the T-Birds lost the game against Glendale but followed it up with impressive defense and a close win against Phoenix College, 55- 52.  After the Pima win on Sept. 19, Mesa stepped on the gridiron against the Aztecs, securing the sixth straight win against them; a streak going back to 2011.  Rathlen Ricedorff contributed greatly to the first quarter with several complete passes.  Austin Carver started with a kick off at 63 yards.  Three touchdowns were made in the first quarter alone. Second quarter, Mesa fumbled three times and several incomplete passes made the ground shaky.   Nathan Farmer made a field goal from 34 yards. At halftime the score was 27-20, with Mesa ahead by seven. 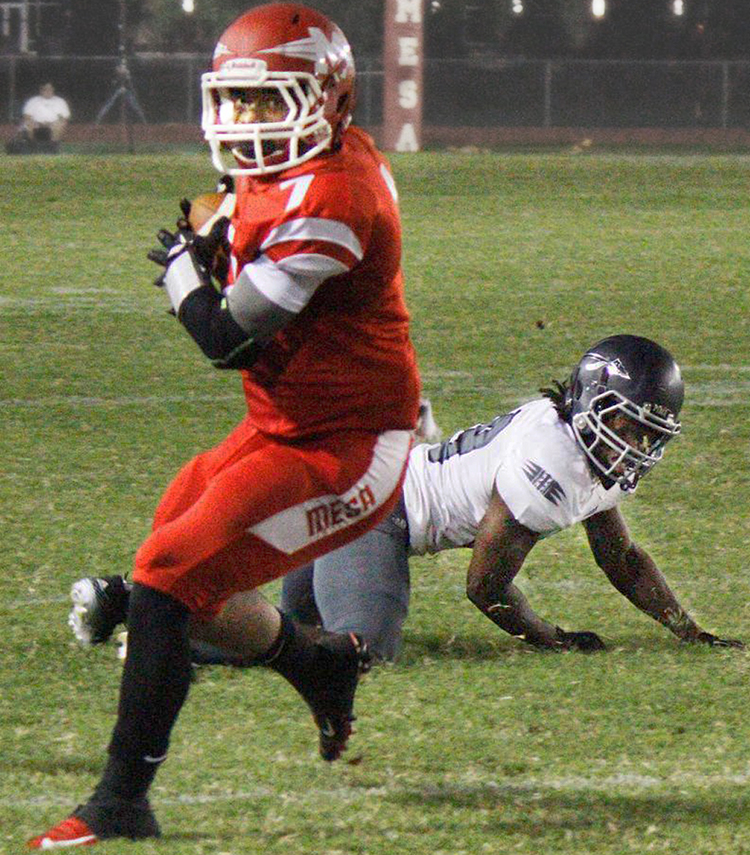 There were several highlights in the third quarter. Kamon Clayton scored an 84 yard touchdown. There were several injuries and consequently timeouts. At 2:55 with nine yards to go, a Pima player was seriously injured to the point where the paramedics had to carry him off the field, the score at 34 to 20. Pima scored a touchdown afterwards making the score 34 to 26 at 1:28 then a kick off to make it 34 to 27. With more incomplete passes at 4th quarter, the crowd was kept in suspense whether or not Pima would catch up to the score.

Then at 11:22 there was an exciting touchdown by Devin Reed making the score 41 to 27. There were several rushes by Kenneth Steele at 6 yards, then 3 yards.  Kian Homme from Pima made attempts for passes that were intercepted.  In the final minute eight tackles came from Brantley and an interception making it a win for Mesa Community College at 41-27.

Clayton, a promising player scored an 84 yard touchdown as well as a 50 yard touchdown in week two of the season. “They tried to beat us but we came in and fought hard,” Clayton said. “Good win against a good team.”  Head coach Ryan Felker acknowledged respect for their opponents, as well as being glad for Mesa’s deserved win with both good defense and offense this time around.

It looks like the T-Birds are coming up for some more victories with several promising players and the season will be an exciting one to watch.   With two wins in a row, we can look forward to a promising future for the team and hopefully no more injuries on either sides. As a mention, after the completed game a squad of Mesa police were present to assist with disruptive and disorderly conduct from Pima players and spectators. No arrests were made.

Volleyball winless as they fall to Yavapai

By: Warren Younger The T-Birds played hard but fell in straight sets against Yavapai College in the
Read More
10/27/2014

By: Joe Jacquez With the Region I playoff tournament quickly approaching, every game is important fo
Read More
04/10/2018