September has been a month of ups and downs for the MCC men’s soccer team, with wins and losses being racked up in equal measure.  On Sept. 15, Mesa hosted a game against Chandler-Gilbert Community College, a game that went long and ended in a loss in overtime.  After 16 minutes of play, Zach Frazier of Chandler-Gilbert scored the first goal of the game.  There was a lot of back and forth for the rest of the first half, though no further goals by halftime.  Mesa would not answer this goal until much later, when Benjamin Delgadillo scored the second goal of the game with the assistance of Obedd Fuentes and Jose Soto in the 76th minute.

The score remained tied at 1-1, which led to the overtime period of play, where Chandler-Gilbert would close out the game with a goal made by Jacob Cooking. The final score was 2-1 in favor of Chandler-Gilbert, setting the T-Birds record at 4-3. Their next game would be against Yavapai College on Sept. 17, the result of which was a shutout by Yavapai. A difficult team within the conference, Yavapai proved an insurmountable challenge for the MCC team, winning 4-0. At this point, the T-Birds record of wins and losses was at parity, going into their game on Sept. 19 against Pima Community College.

The first half of the game went in clear favor of Pima, with goals scored by Ryan Bristow and Juan Pablo Segura against MCC. Mesa only answered back once, when Delgadillo scored, 74 minutes into the game. The game ended with the score unchanged after this goal, going to Pima 2-1. Mesa broke the losing streak that had persisted for three games on Sept. 22 in an away game against Paradise Valley Community College in conclusive fashion. 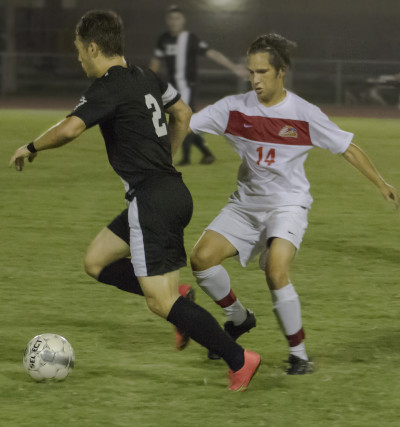 Obedd Fuentes scored the first two goals of the game in succession, followed up by Max Schmidt and Delgadillo with goals of their own.Though Paradise Valley made numerous attempts of their own, T-Bird goalkeeper Sly Becerra was able to prevent any from being successful.The game ended in a 4-0 shutout, giving Mesa a 5-5 record for the season, as they look towards their next contest. Scottsdale Community College will be hosted by MCC on Oct. 6 at 8 p.m. in the John D. Riggs Stadium.
To find out more information about upcoming game times, dates and locations, visit www.mesatbirdsports.com or check the events calendar on the MCC website at www.mesacc.edu/.calendars/all.