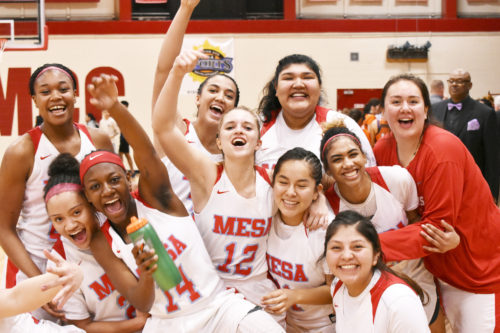 The championship was a victory away for the Lady T-Birds. The victory would not be easy, as they faced No. 1 ranked team, Monroe Community College of New York. The Monroe Lady Tribunes moved on to the championship after defeating the Lady T-Birds, and Mesa headed down to third place game against the Highland Scotties from Iowa, who were undefeated until their semifinal game against the Kirkwood Lady Eagles from Kansas. Jaynelle Robinson, 6-foot-3 center, clogged up the paint, with 16 rebounds and 16 points, while guard Sierra Green attacked from beyond the arc, making 7-11 3-pointers and 25 points for the game. Guard Torrie Cash was another threat who put 16 points on the board.

Commentators Kamarri Darrington and Chuck Sebastian, during the Mesa vs. Monroe game, talked about whichever team-faced Highland would be facing a lineup that has a chip on their shoulder. Highland missed some free throws at the end of the game that cost them the victory. The Lady T-Birds played at 3 p.m. on Saturday, Mar. 24 against Highland for third place in the NJCAA tournament. The Highland Scotties came out to play their game and secure third place. The Scotties employed a full-court press, guarding players the entire length of the court.

The Lady T-Birds managed the Highland press well at the start and was down by three points at the end of the quarter. Guard Leah Goodman went to the bench early in the quarter after missing both of her shots and turning over possession twice. She did not return to action until the beginning of the second quarter. Guard Cheyenne Begay would come in for the team’s consistent season scorer and put four points on the board before Goodman returned. She would replace Trae Frazier after a couple of minutes gone in the second quarter.
Highland would begin to build their lead after Begay entered the game. They would make shots and steal possession away from the Lady Thunderbirds to build up their lead. 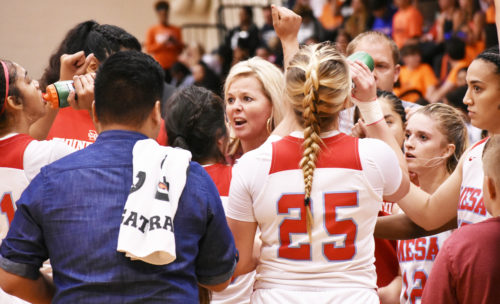 At about the halfway mark in the second quarter, coach Stephenson pulled Leah Goodman after committing another turnover and brought Deja Dagons into the game. Mesa went into halftime down, 47-31. The Lady T-Birds had to make some adjustments in the locker room to remain competitive in the final game of the tournament. Coach Stephenson started the second half with her original starting lineup, Leah Goodman, Deja Dagons, Diamond Fuller, Anessa Glenn, and Takara Wade. MCC was scoreless after forward Anessa Glenn made a free throw with four minutes left before halftime. Highland would go on a 22-0 run before point guard Courtney Colleary assisted Cheyenne Begay in a 2-pointer.

Mesa would begin their comeback about halfway through the third quarter beginning a 20-0 run of their own to bring the deficit against Highland to six points, 61-55, early in the fourth quarter. The Lady T-Birds would not come any closer to evening the scoreboard. With about four minutes left in the game, both teams would be in the bonus and get two free throws whenever a foul was committed. Even though the ladies had a huge deficit in front of them, they did not let that stop them from fighting for that third spot in the tournament.The Lady T-Birds held their head high as they did everything within their means to win.

Sex trafficking is more prominent than many realize

By: Brittany Cruz There is more slavery being recorded today than any other time in human history,
Read More
01/18/2015