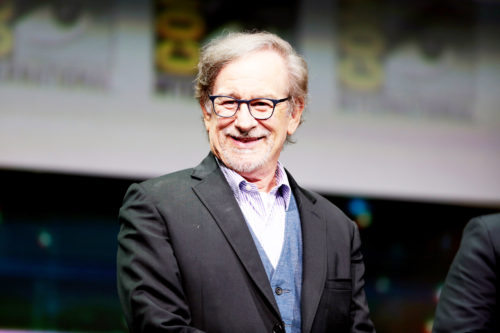 “Ready Player One” is directed by Steven Spielberg, stars Tye Sheridan, Olivia Cooke, Mark Rylance, and Simon Pegg. This film, based off of the 2011 novel of the same name by Ernest Cline, who also co-wrote the screenplay with Zak Penn, has had a pretty solid hype-train since it was announced. Practically choked with references, the trailers promised a world of pop-culture nods and gags, prominently featuring famous fictional figures like the eponymous robot from The Iron Giant, the DeLorean from Back To The Future, and the titular ape from King Kong. While those figures do show up in the film, some may be surprised to learn that there is a pretty endearing plot behind all the allusions and references. The movie takes place in a dystopian version of Columbus, Ohio in the year 2045, where an immersive virtual-reality video game world called the OASIS, created by eccentric inventor James Halliday (Rylance), has become the primary means of entertainment for people, almost to a dangerous extent.

Upon Halliday’s death, he left a game to be played within OASIS where the goal is the search for an Easter egg which gives the winner half-a-trillion dollars and full ownership of the OASIS.
The search for the egg is not as simple as it seems and hasn’t been completed for years by the time the movie takes place. Then we get to our main character, Wade Watts (Sheridan), a kid living in “the stacks” of Columbus (literally trailers stacked on top of each other), who dons an avatar known as “Parzival” to explore the OASIS and search for the easter egg. Meanwhile, the villainous IOI Corporation, led by Nolan Sorrento (Ben Mendelsohn), has been forcing an army of people indebted to the company to hunt for the Easter egg, and when Parzival seems to be making headway in the challenge, Sorrento begins to scheme. I gotta say, this movie was fun. It wasn’t a masterpiece by any stretch, and probably will be lost amongst the many films coming later this year, but it had that Spielberg-ian charm we all know and love.

The best part of the film easily was Spielberg’s directing, especially the live action sequences.  The OASIS, while an interesting and exciting concept, makes for an okay setting, and is never exactly explored beyond the areas important to the plot.  For example, movies like Wreck-it-Ralph, which has a similar virtual world to Ready Player One, tend to take time to show off the areas of the places they’re in, whereas Ready Player One goes only where the plot dictates and no more.  Despite the ability to do basically anything with a virtual world and virtual actors, the scenes seem empty and plastic almost, and the directing seems more phoned-in. I’m not saying it’s necessarily badly done; for any Marvel or DC film director, these scenes would be praised from here and back, but for a man like Steven Spielberg, these scenes seem like they didn’t have his signature sense of wonder, which could have made the moments in the OASIS way more effective.
The acting is also really good… in the live action scenes.

It may just be that I am spoiled by too many amazing Andy Serkis motion-capture roles, or that I haven’t read the book, but once the actors become their avatars, it’s like they were told to over-act to compensate for the limitations of the technology. Olivia Cooke’s character, Art3mis, is a good example of a genuinely great performance in the live action scenes and an almost Razzie-worthy performance in the OASIS scenes. Another issue is the lack of backstory for most of the characters, which is disappointing because almost all of them are actually really interesting, and I would’ve loved to have heard more about them, instead of the long monologues by Wade/Parzival that hold your hand through any and every bit of plot development. While I do have problems with the film, there isn’t anything explicitly bad about it. Steven Spielberg offers one of his more fun films in recent years with Ready Player One and if you’re in it for that, then I believe you’ll have a good time, and if you want pop culture references to point out and discuss, then it’s good for that too.  Just shut your mind off, enter the OASIS with open eyes, and you will have fun.

DNA of a winning program

Rob Steiner Mesa CC Legend Mesa Community College (MCC) athletic teams have had their share of ups and downs with one team standing above the rest with over a decade of wins. MCC Women’s basketball te
Read More

Sydney Ritter MesaCC Legend The IDEA museum, in downtown Mesa, is opening their newest exhibition, “Sonoran Safari” to the public on Feb. 9. According to the website, “Visitors coming to Sonoran Safar
Read More

Mahriah Schmidt Mesa Legend The holidays are upon us and while many students celebrate the season surrounded by family and friends, there is a group of students on campus that aren’t accustomed to cel
Read More