Guest choreographers and students dance the night away 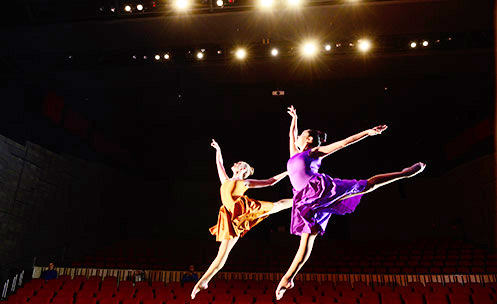 The MCC Performing Arts Center is holding its first dance performance of 2018.  Featuring the MCC Dance Company, a variety of dance styles with guest choreographers showcasing the talent of the dance groups will be performed. The following night’s performance features choreography from graduating students majoring in Dance. The Dance Company has been preparing for months for their shows. Praise and standing ovations increase their resolve to execute a successful string of performances night after night. Tina Rangel is the director of MCC Dance Company. She assisted in establishing an Associate of Arts-Fine Arts degree with an emphasis in dance at MCC. As director, she produces biannual formal productions in the Performing Arts Center.  “Dance performances are held at MCC each semester,” Rangel said. “One formal show in the Performing Arts Center and one end of the year showcase in the East Gym in the fall [semester].”

In the spring, there is one formal performance as well as one scholarship showcase for graduating dance students. Overall, there are five scheduled shows per year, Rangel said. The Dance Company has performed across the valley at local high schools, nursing homes, art museums, fashion shows, festivals and other venues. Their most notable performance, however, was at Super Bowl 49 halftime show alongside renowned singer Katy Perry. The Dance Company’s engaging performances attract large groups of all ages and backgrounds. Rangel credits diversity within the ranks of the Dance Company in drawing in the crowds. “We have dancers from various backgrounds and ethnicities. Our dance classes and performances showcase various styles of dance, some from other countries,” she said.

Rangel believes that dance as a whole is universal. “It is a language that everyone speaks,” she mentions. “[The art of dance] is a nonverbal way to communicate with. There is no translating required!” Rangel said the dance company students began their rehearsals in mid-January all in preparation for the production near the end of the semester. Dance company members rehearse eight hours a week with additional technical rehearsals during the week of the performance. Rangel often shares her passion of dance by bringing various artists to perform at MCC, bringing with them the numerous varieties of dance styles, including ballet, tap, jazz, hip hop, belly dancing, salsa, West African, folk, classical and many more. The dance company will perform on Apr. 12 and 13 at the Performing Arts Center, as well as a scholarship showcase on Apr. 14. Details about this show and others are found on the MCC Performing Arts Center website.

Hacking has become easy with the help of Mr. Robot