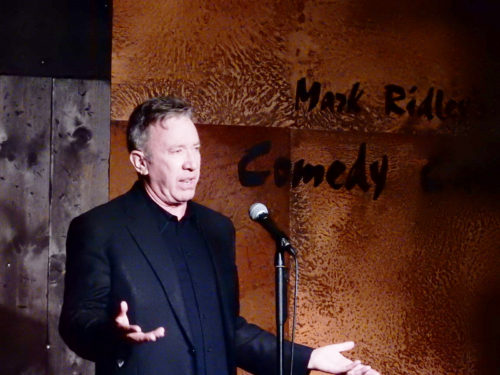 2018, there are eleven late-night entertainment programs where politics, especially right-leaning politics, play the primary butt of the joke.  With shows like “Full Frontal with Samantha Bee”, “The Late Show with Stephen Colbert”, and “Saturday Night Live” regularly lampooning the Republican doings of the week (particularly when it has to do with the oft-controversial President Trump), it’s easy to say that politics has taken hold of our televisions. Personally, I don’t mind the current lineup, but I get that some people might not want to see politics everywhere when you can already get 24/7 politics on your phone or on cable news networks, and especially if you might not agree with the primarily left-leaning nature of the comedy on these programs. But I think a lot of my friends, myself included, have been dismissive of political comedy from the other side of the spectrum. When ABC’s Tim Allen vehicle “Last Man Standing” was canceled, an uproar in conservative circles arose, claiming ABC had ended the series due to its right-leaning jokes and “politically incorrect” comedy, which ABC denied.

I personally had never seen the show or heard about its republican humor, but it had run for six seasons and 130 episodes, with viewership rarely dipping below six million viewers an episode.I admit, I was surprised to hear it had such a following, and after watching an episode, it makes sense why. Conservatives have had a dearth of comedy programs to watch in this era of “Daily Shows” and “Jimmy Kimmel’s”, so when they finally got a reprieve from the typical liberal humor, they latched on to Tim Allen and his character’s republican viewpoints.  “Last Man Standing”, as far as I know, never made it abundantly clear in the promotional material that it was right-leaning, all I thought it was was a sitcom about a family man along the same lines as Home Improvement.  But if you watched it, you’d know right away who the intended audience was, as the show made it perfectly clear what position it took on issues of the day. That hesitance to promote the political nature of the program could have been from concerns from ABC, who didn’t expect that a conservative program could have a sizable fanbase, let alone one that would let it go for nearly as many episodes as “30 Rock” had.

But that attitude of hiding the non-liberal jokes seems to be leaving the ABC boardroom, with a new right-wing voice arising in the reboot of “Roseanne” premiering last month. So far the reboot has been well received by conservative audiences, even going so far as to get praised in a recent speech by President Trump. Roseanne Barr, the star of the show herself being a self-proclaimed Trump supporter also supports these sentiments that the show is for the Trump-supporting, middle-class audiences that the TV family reflects. And while the show certainly has less political content compared to “Last Man Standing”, the politics have made a huge impact in “Roseanne”’s reception, and it’s ratings for the first three episodes have been higher than even the highest-rated episode of “Last Man”. While it’s clear that liberal voices have taken control of the American late-night market in TV, it’s looking like conservative voices have found their home in something just as American; the family sitcom.

Selfies could be healthier than we think

Kathryn Yslas Mesa Legend Apparently, the world will end not with a bang nor with a whimper, but the
Read More
02/02/2015

Workplace should be free from gossip

Being a student and having a job basically go hand-in-hand.  Young people usually go to college with
Read More
11/09/2018