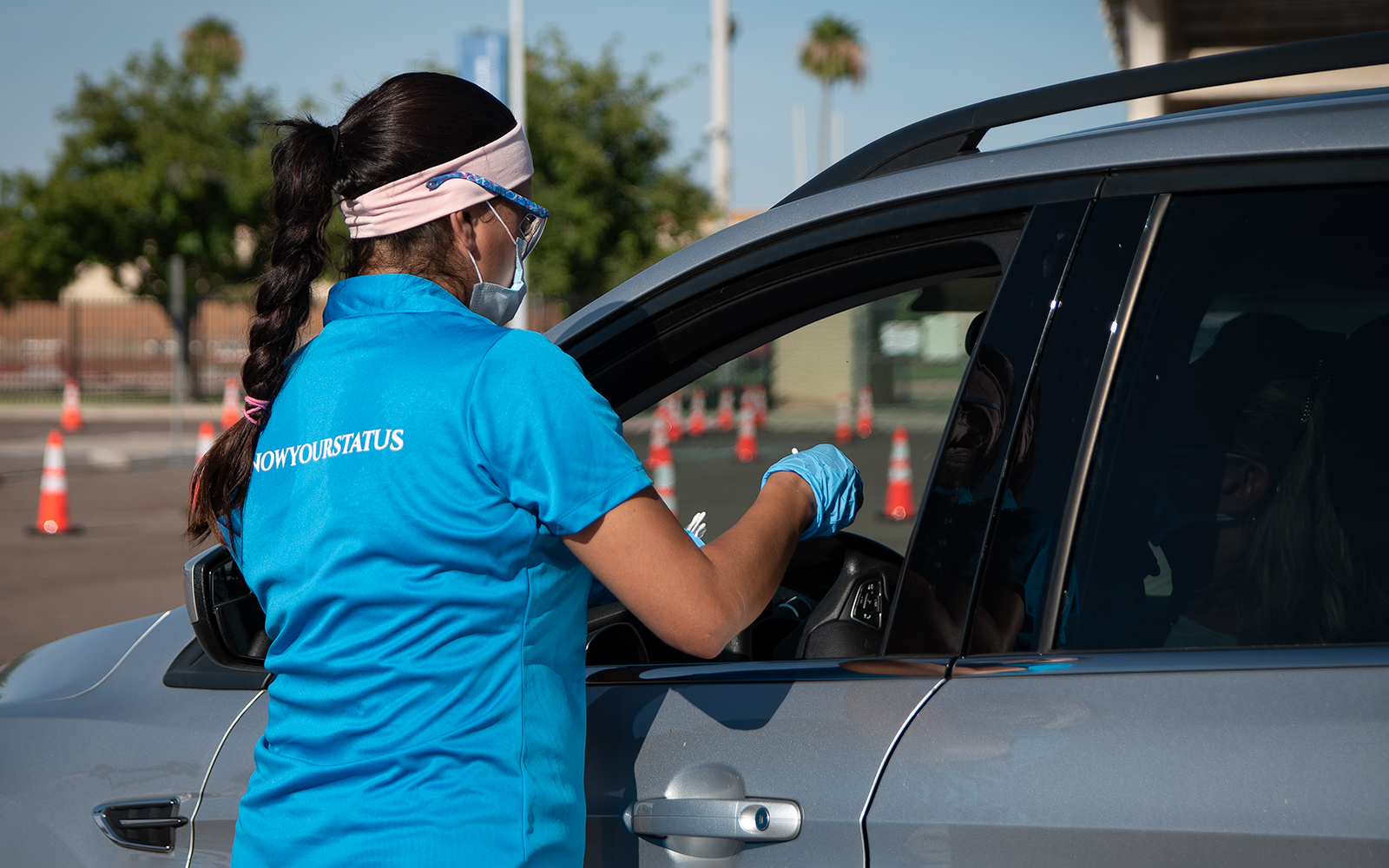 TestNOW Chief Executive Raymond Embry said Embry Women’s Health essentially “built a McDonalds” in the middle of nowhere for the public good, and are seeing no financial aid from government officials for their efforts.

“ADHS has not helped us with any staff,” said Embry’s human resources manager Michael Watson. “I know that we’ve reached out and asked for volunteer staff. All I got was an email saying they were going to look at the situation.”

Through TestNow, coronavirus drive-thru testing sites created by Embry Women’s Health at the onset of the pandemic, Embry Women’s Health has created the largest availability of COVID-19 testing sites in Arizona. Their most active site is located on the Mesa Community College campus on Dobson Road and Southern Avenue. Offering no-cost testing at more than Embry provides no-cost testing to around 18,000 patients per day at more than 67 sites across the state. They’re constantly growing, hiring and seeking financial help from the ADHS.

Embry has asked ADHS for support from the federal CARES Act fund. Arizona received more than $4 billion through the CARES Act and has seen more than 685,000 cases, but Embry has received little from the state coffer. They’ve also not received help with staffing.

Watson said the email he received detailed that ADHS was looking to help five large testing sites. He said he’s still waiting to hear which five sites and when he will receive aid.

“For our providers, we are asking for certificates. They can be CNA, phlebotomists, nurses or licensed physician assistants,” he explained.

Watson said their hiring process is going well and located throughout counties outside of Maricopa such as Mohave, Cochise and Pima. Embry is constantly hiring because they are constantly growing, and despite their financial frustrations, they’ll add two locations this week.

“We are opening up in Payson tomorrow on Jan. 21,” said Philip Schaefer, director of marketing at Embry Women’s Health. “We are also opening in Frontier Park in Show Low on Jan. 22, and next week we’re opening our first site in Paige by the Grand Canyon.”

Schaefer explained Embry testing sites are needed because they have the ability to provide no-cost services for all communities without any stipulations.

“From infants to elderly, we will test them,” said Schaefer. “Some outfits, they don’t test anyone younger than 5 or 12-years-old.”

Additionally, Embry sites have the ability to distribute COVID-19 and flu vaccinations. While 30 Embry sites have been approved for vaccination distribution, Schaefer said they are still waiting to receive the vaccines, reportedly in short supply across the country. Still, this doesn’t mean they aren’t available to help.

For example, on Jan. 16, Embry Women’s Health was notified that a Mohave County pharmacy had only been able to administer 200 of the 500 vaccines they were given.

“They had 300 that needed to be administered or they were going to spoil,” said Schaefer. “We rallied out there last Saturday and distributed the vaccine in less than five hours.”

Despite concerns, Watson said Embry isn’t slowing down anytime soon because they still have a community to serve.

“We are going to be here for the community as long as we can. So from that end, we need community support,” said Schaefer. “If they can contact their local representatives and let them know TestNow is in our community, and we need vaccines. We need the funding that’s going out to these other, larger, more well known organizations.”

“Conversations and reviews of documentation with Embry are ongoing,” wrote Elliot.