From February 27 to April 9, MCC’s Southern and Dobson campus will be host to part of an international touring art exhibit titled “Play Me, I’m Yours.” The exhibit, created in 2008 by British artist Luke Jerram, consists of a number of restored and decorated pianos scattered across a city for public use. According to a statement on the exhibit’s website, Jerram conceived of the project while observing people at his local laundromat. “I suddenly realised that within a city, there must be hundreds of these invisible communities, regularly spending time with one another in silence,” Jerram’s statement said. “Placing a piano into the space was my solution to this problem, acting as a catalyst for conversation and changing the dynamics of a space.” 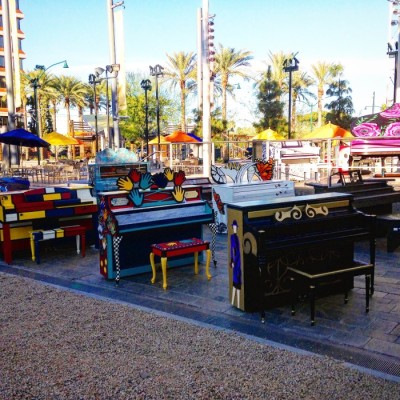 The project, currently hosted in Mesa by the Mesa Arts Center, has been touring the world since it inception, and has visited countries as diverse as Singapore, Peru, Australia, and Luxembourg. Mesa will host 24 pianos for the duration of the event, with more than 10 of them located along Main street. MCC’s piano, located in the student lounge, has already drawn significant attention.Student Miguel Ortega was playing “Space Dementia” by British band Muse. “I think it really is a useful asset for a school campus like this,” MCC student Miguel Ortega said. “It could attract a lot more people, just having something like this lying around.”

Another MCC student, Jonathan D’Luzansky, is studying business, but regularly practices in the student lounge between classes. “I think they should just keep it here all the time,” D’Luzansky said. “I don’t get a lot of practice since I’m so busy, but since it’s here and I have hours between classes, I guess I can play for a while.” “When I come in, I always it,” D’Luzansky added. “I play it like twice a week.”D’Luzansky recognized that some people might not always appreciate the sound.“If people like listening, they can listen. And if they don’t like it they can leave,” he said, laughing. “Placing a piano into the space was my solution to this problem, acting as a catalyst for conversation and changing the dynamics of a space,”
-Artist Luke Jerram

By: Ryan Scott Movies are big business, that is no secret and for those who enjoy seeing movies in T
Read More
02/07/2017