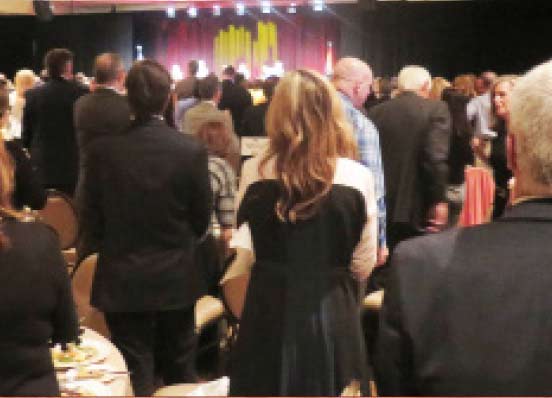 The 34th annual Walter Cronkite Award for Excellence in Journalism luncheon was held on Oct. 19 at the Sheraton Grand Phoenix hotel, honoring both Judy Woodruff and the late Gwen Ifill. Woodruff is the anchor and managing editor of “PBS NewsHour,” which she previously co-anchored with Gwen Ifill. Gwen Ifill’s brother Roberto Ifill accepted the award on her behalf and addressed the audience. “I want to first express my thanks, and gratitude, for this amazing honor that you’ve done for Gwen on behalf of the Ifill family,” Roberto Ifill said.

He said that he wanted to discuss his sister’s commitment to two principles that undergirded her life; getting the story right, and getting the right stories out. “Although we were all interested in the world around us it was Gwen particularly, even at a young age who had an insatiable curiosity that, coupled with a great facility for writing pointed her inevitably toward a career in journalism,” Roberto Ifill said. According to him, Gwen Ifill took pride in her ability to produce clean copy, and that her writing rarely required the intervention of an editor.

“She became legendary, for being able to get the story right,” Roberto Ifill said. Woodruff made her remarks after collecting her award, following Roberto Ifill’s statement to those in attendance. “I am thrilled, thrilled beyond words to be here, and for so many reasons,” Woodruff said. Woodruff spoke about Gwen Ifill from her perspective as a co-worker on “PBS NewsHour.” “Honest, fearless, funny, she had it all,” Woodruff said. “And of course, she was the pioneer. Trailblazing, from the moment she became a reporter.”

Of Walter Cronkite’s influence on her, Woodruff said that “this award is given, in the name of someone I revered as a young girl, just starting to watch television news.” “Well before I had any idea of going into journalism, I knew he was the gold standard,” Woodruff said. The Cronkite School enriches the field of journalism with the students that graduate after attending Woodruff said, and gives those already working in the field the opportunity to see the students’ work.

“Today, on the ‘NewsHour,’ we will feature the reporting of the remarkable team here who put together the documentary ‘Troubled Water,’” Woodruff said. The precarious place of the world currently, and the need for the existence of quality reporting at a time where information is oversaturated, were points stressed by Woodruff. She said that these were reasons why young journalists were needed. “Jump into journalism,” Woodruff said.

Attended by professionals in the journalism industry and members of the community, the luncheon also serves as an avenue for fundraising that goes to the Walter Cronkite School of Journalism and Mass Communication of Arizona State University. To find out more information about donating to Cronkite School, one can visit Cronkite.asu.edu/2020.

Kathryn Yslas Mesa Legend Women do not pee out of their vaginas.  This fact often comes as a surpris
Read More
02/01/2016