On Friday, April 21st Sanders, and Perez, along with other speakers form the community, met at Mesa Amphitheatre in downtown Mesa as part of the Come Together and Fight Back Tour to garner community support for new bills and discuss the state of modern politics. 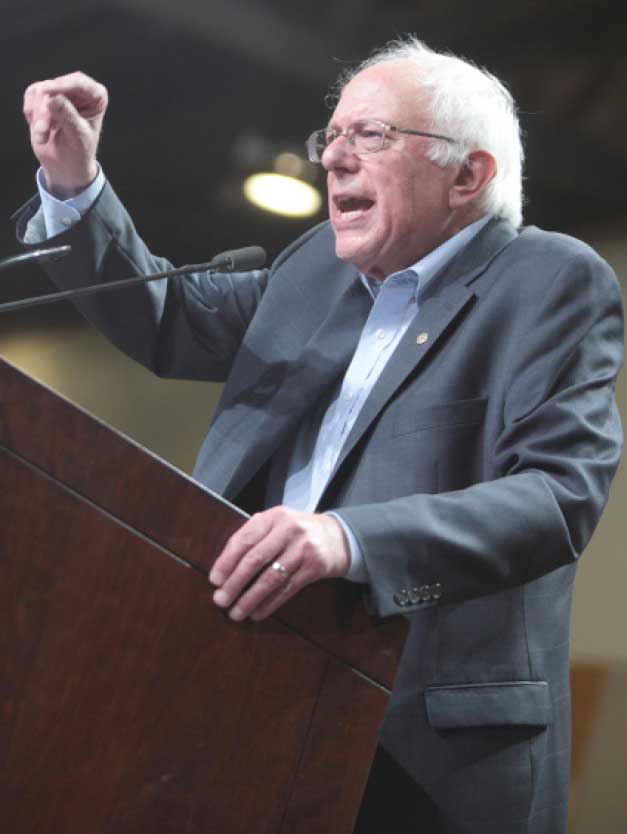 Lines started to grow from early in the day and several hours before the event the que already snaked up and down the block several times. Despite rising temperatures and close quarters event goers were smiling and positive. “Feeling the Bern” must be infectious because talk in line was overwhelmingly positive.

As vendors walked up and down lines giving away buttons and selling trinkets community activists and organizers walked up and down lines trying to rally support. Women’s health issues, equal pay, healthcare, and the minimum wage dominated the clipboards of canvassers. Talk in line slipped from casual rhetoric to the upcoming protest in downtown phoenix for the environment.

In face of radio and social media chatter that the venue would not fill because of the location the 5,000-person Mesa Amphitheatre was loaded to the brim.  Several times the crowd whipped itself into an anti-Trump chant but aside from these moments the event remained calm.  Many of these hecklers sported merchandise downing the current administration calling our president a clown, liar, or worse.

Openers touched on issues central to Arizona including immigration, the border wall and healthcare and the dreamers. Tom Perez found his way on stage to introduce Bernie Sanders.
Perez touched on a multitude of issues that affect our local community from unions and teachers too dreamers and the issues that face them.

Perez encouraged youth to get involved in their party and community, as he did at a young age, to create a better America. Chants rippled off the large American flag on-stage as Bernie Sanders stepped up to the podium. Echoes of “Bernie, Bernie, Bernie” reverberated through the amphitheater and off the grass on the lawn.

Bernie used opening remarks from American forefather Fredrick Douglas. Bernie Sanders started by touching on problems within his own party. Citing the democratic parties need to update their election model. The same model, he says, that lead to their loss in the last election. Bernie pushed on too discuss the cuts in education proposed by new legislation and tax breaks to the top 2% of American’s hidden in the new “Ryan-care” bill saying, “You don’t have to have a Ph.D. in economics to know you don’t give tax breaks to billionaires and cut programs to children.”

As the night progressed Bernie spouted facts and cited legislation from the hip.  He cited his efforts to raise the federal minimum wage to $15 saying that 52% of all new income is going to the top 1% and that must change. He went on to call on the Walden family, America’s wealthiest family and Wal-Mart owners, to pay their workers a living wage. Sanders went on to say, “The country does not survive morally if so few have so much and so many have so little,” eliciting the speeches loudest cheers from the crowd.

One Mesa Community College who found her way out of the crowd and onto stage during Bernie Sanders’ speech and described the experience as, “Technically I’m middle class and being up there was like he was really speaking to me and the people that I surround myself with.” Patricia Guillen, a writing student at MCC, thinks Bernie can help the community, “To bring awareness to the majority of the students here…I think if anything he can raise awareness for the people that are around the wealthier people.

The Come Together Fight Back Tour in Mesa brought together a mixed demographic of Arizonans to experience political discourse. Hopefully, the event, and the subsequent spam emails following a ticket purchase, encourage people to get involved and stay involved.

By: Warren Younger It has been awhile since we have witnessed a good “dark” anime series. Not since
Read More
11/10/2014

By: Julija Kaselyte Music business is a competitive yet tempting field to work in. It opens doors fo
Read More
03/21/2017