With every movie nowadays getting an obligatory sequel, it was only a matter of time before literature followed suit. It is seldom, however that a sequel truly allows a new story to flourish and still managing to capture the spirit of the original. Harper Lee’s newest book, “Go Set a Watchman,” the sequel to the classic novel, “To Kill a Mockingbird,” is one such exception.
Decades after publishing her Pulitzer Prize winning novel, “To Kill a Mockingbird,” Harper Lee continues the story of Jean-Louise “Scout” Finch in her new novel, “Go Set a Watchman.” In the novel, a now twenty six year old Scout returns home after completing college in New York to find that things are changing in Maycomb, Alabama. The civil rights movement is at their door and to her horror, Scout finds that her friends and loved ones may be on opposite sides of the fight. As Scout discovers, even the unwavering moral compass of the ever-ethical Atticus Finch may have gotten off course… 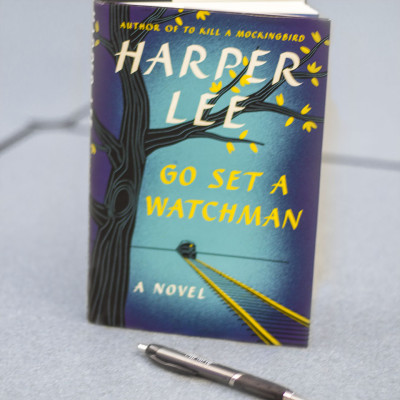 Whereas the original novel dealt with the ideas of racial inequality and the decay of the Southern social structure from the child Scout’s perspective, Go Set a Watchman presents the idea of Scout now having to reassess her childhood values and everything she thinks she knows about the people she has known all her life. Lee brilliantly presents what it’s like to enter into adulthood, to have the veil of our naiveté lifted and to suddenly see the true nature of the world.
This is also a part of another major highlight of Lee’s new novel; the chance to see her classic characters from Mockingbird from an adult perspective rather than Scout’s childish perceptions of them. In Watchman, time has certainly had its way with the beloved Atticus Finch, Calpurnia, and many other citizens of Maycomb, as well as everything they once represented to Scout. Although some readers may bemoan how they appear in Watchman, this new story adds tremendous depth to Harper Lee’s already rich characters.

Harper Lee’s particular style of writing also adds weight to Watchman. Similar to Mockingbird, Watchman is written from Scout’s point of view and Lee’s prose perfectly captures the essence of a young woman’s thoughts, with hazy childhood memories and erratic musings. Lee’s style harkens back to an older, more detached style of literature that entreats the reader to follow Scout’s references to civil rights era Alabama and helps to give the novel a sense of time and setting. Lee also uses the Alabama setting to warn against the ignorance of history, at one point comparing the civil rights era South with the Reconstruction era that followed the Civil War.
With “Go Set a Watchman,” you are getting the entire package.

The reader first experiences the coming of age of a young woman growing up in a difficult point in history. From there, they are presented with the idea of rethinking their childhood values and the ideas of the people and world that shaped them. With these elements, writing style, and commentary that are undeniably Harper Lee, Go Set a Watchman is truly the work of a master and a fantastic sequel to her masterpiece.

Jaime Faulkner Mesa Legend “Star Wars” has been a cultural phenomenon since 1977, and the hype aroun
Read More
04/28/2015

As the temps rise, fashion on campus warms up in preparation for the end of the semester. Sabrina Mo
Read More
12/10/2016