According to some in the education field, grade inflation is on the rise.  Grade inflation is the idea that educators, especially at the university level, have begun in recent years to grade more leniently, causing an explosion in the number of high grades as compared to the past.  The statistical backing for the existence of grade inflation, it seems, is sound.  A 2012 study done by Stuart Rojstaczer and Christopher Healy, both with experience in academia, concluded that A had become the most commonly given grade in American higher education.  Rojstaczer and Healy also deduced that this “inflation” in the number of A’s was due not to improvements in performance, but to lower standards among educators.

When it comes to whether grade inflation is real, Josh L., a criminal justice student at MCC, had mixed feelings. “Honestly, I think it depends on the class. Because with some of the classes I’ve taken, unless you’re active in the class, you’re really not going to get an easy A,” he said. “But there have been a couple classes I’ve taken here, where, literally, if you show up and do the readings, that’s the majority of your grade.”  Roger Yohe, vice president of academic affairs at MCC, also sees problems with the grade inflation model.  “Where I have challenges is in comparing something that happened 10 or 20 years ago to today, because higher education is changing,” he said.

The most important of these changes, according to Yohe, is the shift away from an emphasis on teaching toward an emphasis on learning. “When I was an undergraduate, you had three tests and a final, or a midterm and a final. Those days are over,” he said. “Learners need more feedback. So when you talk about learning rather than teaching, there’s a different discussion in how you assess that.” The method most used in assessing grade inflation has been to look at standardized test scores, something Yohe is hesitant to endorse. “It’s an overreliance on standardized tests, and standardized tests provide a really reductionist view of learning down to a number,” he said.

Yohe also explained that many professors who are concerned about grade inflation see intelligence and educational performance as a bell curve, with a small number of excellent students, a small number of poor students, and a vast middle range.  “In the past, we had some faculty who would take this notion that intelligence is naturally distributed, and apply that to the classroom,” Yohe said. “So if they have a hundred students, the professor knows how many are going to get A’s already.” This methodology of grading, Yohe said, is problematic for two reasons. First, it neglects the idea of mastery learning – the concept that all students should exit a class with a predetermined level of knowledge and ability before moving on.

“If you’ve got outcomes for your students, and students meet those outcomes, why shouldn’t they be able to get an A if it’s at that level?” Yohe said.  Second, according to Yohe, the limiting of A’s to a certain specific number of students creates competition in the classroom.  “You have everyone competing for an A, and no one is going to help each other out,” he said. “You want more of a cooperative than a competitive atmosphere in a classroom.”  Josh L. agreed that schools shouldn’t worry about inflation or trying to “deflate” grades, but should rather try to get information to “stick.”  “I think they should work on trying to figure out how to get the material that they’re covering and teaching you to stick past that semester,” he said. “Because with a lot of classes I’ve taken, you learn all this stuff for a semester or two, and after you pass it, you only remember bits and pieces…”

Additionally, Yohe said, those teachers and institutions that conceive of education and grading in economic terms can actually foster the same grade inflation they obsess over.  “The word ‘inflation’ in and of itself comes from economics. It talks about an economic value,” he said. “When you get in that mentality, like a lot of private institutions do, then I think there is grade inflation.”  “If you pay a high amount of money to attend a private university, and they want to retain you, are they going to give more students A’s?” he explained.  Rather than running a school like a business, Yohe said, the emphasis should always be on learning.

“Our currency is learning, it’s not dollars and cents… Business people can get frustrated if they think educators can account for our currency like they can for their currency,” he said. “We’re getting better at keeping track of our currency of learning, but we have a ways to go yet.”In Yohe’s estimation, the debates about grade inflation aren’t really about grades at all, but competing philosophies. “We want our current conversation to be about learning and competence, and how we can demonstrate that through simple forms of assessment,” he said. “People who have a grade inflation discussion in mind really are only looking at the surface, at the numbers.” 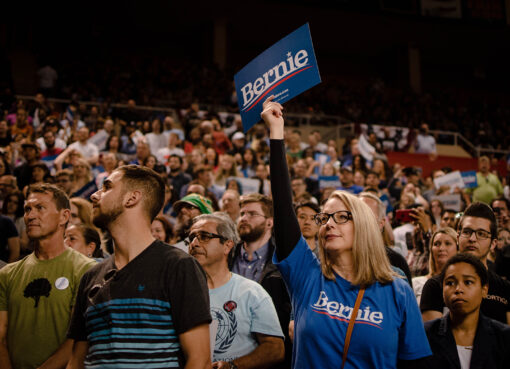 Senator Bernie Sanders made sure his slogan “Not me. Us,” echoed throughout the Phoenix Veterans Mem
Read More
02/29/2016

Allison Cripe Mesa Legend “Me and my classmates had a question,” a young girl nervously asks into a
Read More