I was watching a national news show last night and they played a portion of a remarkable video featuring Abbeville LA Police Captain Clay Higgins addressing wanted members of a gang called the Gremlins who have been terrorizing Louisiana communities. My Initial knee-jerk reaction was something close to shock. Captain Higgins was calling these fugitives out in a manner that hearkens back to the days of old school, cowboy style beef between law enforcement and outlaws. As the video progressed I began to appreciate what a clear, comprehensive message Higgins was delivering. This guy has every intention of using all the resources at his disposal to catch these guys and ultimately suppress this gang. He spoke with sincerity and conviction even resorting to overt trash talking to convey toughness and a willingness to use force. Taunting the fugitives and challenging them to meet him anytime anywhere. 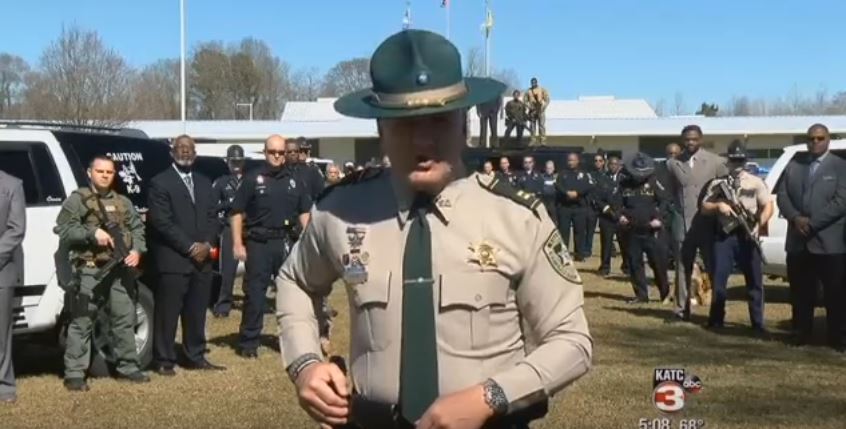 I’m sure there will be some controversy over whether this is real law enforcement or just a publicity stunt. I don’t know what to tell you, folks… I can just say this guy has conviction.  I was impressed with how Higgins seemed to cover all the bases by addressing potential concerns which may go a long way to preventing his statements from being taken out of context. When you think about the current political climate and ongoing problems between the police and the community, especially with regards to race, this presentation was very well thought out, smart and effective.  He stood in formation, front and center, surrounded by the people and resources he will bring to bear on these fugitives. Community leaders were there in force, making it clear that there is a real partnership with the black community which suffers in so many ways because of gang-related activity that is often exploitive, violent and otherwise destructive.

Wow! Could it be that he’s saying black lives actually do matter to law enforcement and that’s why they are targeting this criminal element in particular, who is operating in, and victimizing the members of the black American communities? Would members of the Black Lives Matter movement believe that black lives actually matter to this guy? Probably not, and I think that’s unfortunate. This is a provocative video that will continue to cause a national debate, evoking outrage in some circles and high praise in others.   I gravitate toward the “high praise” camp. Ultimately this is a “call to duty” speech for law enforcement and the community to work together. However, this can be a hard thing to accomplish when “good intentions” are often called into question because of issues both real and imagined.

Don’t knock peoples’ hobbies until you try them

Love everywhere yet hard to find

Karlyle Stephens Mesa Legend We’re living in times that are unlike any ever before. Where are we headed? That’s a question I’m not prepared and maybe even too scared to answer.  But I wonder wh
Read More