After falling to Glendale Community College Gauchos on Wednesday Feb. 4 50-45, the lady T-Birds were looking to rebound with a win against the South Mountain Cougars.  Megan Gillespie won the opening tip for the lady T-Birds, Kylie Herd shot and missed.  Four minutes had come off the game clock and the MCC lady T-Birds were in a 10-0 lead thanks to missed shots and turnovers on the other side of the court.

The Cougars eventually got on the board, though Mesa led now by nine; 10-1 with fifteen minutes in the first half.  Halfway through the first half, the lady T-Birds had a 22-3 lead over the Cougars.  At the end of the first half MCC led 36-12 over the visiting South Mountain Cougars.

The Cougars only had their five starters and one reserve present at the game.  According to South Mountain head Coach Byron Jackson, he wants people to know that even though they only had six players available they don’t want people to feel sorry for them.  “When I first came to South Mountain,  I didn’t expect to start but getting to play has been something I am grateful for,” said Dulce Carnona-Aguilar of South Mountain.

About two and a half minutes into the second half the lady T-Birds looked to be on a roll again, as they now led 40-12.  Three minutes into the second half the visiting South Mountain Cougars went on a 4-0 run, but just like that, MCC answered back with an 11-0 run of their own, and looked to be taking control of the game with 13:37 left.  The lady T-Birds defeated the Cougars 75-27, improving MCC’s record to 17-7 and dropping the Cougars to 0-19 this season.

Janessa Aukward lead Mesa with fourteen points in the second half compared to her 0 points in the first half.  MCC shot 47 percent compared to the Cougars 19 percent. Marissa LaRue led the lady T-Birds with eight rebounds and Brianna Clah added five assists.  Carnona-Aguilar played the whole forty minutes of the game for the South Mountain Cougars.

After winning against the Glendale Community College Gauchos on Wednesday February 4, 63-60 the t-birds were looking to continue with a win against the South Mountain Cougars.

The South Mountain Cougars won the opening tip and Kevin Kelly goes in for the score and the Cougars take a 2-0 lead over the MCC T-birds.  After five minutes of play the Cougars had a 11-6 lead. Mid way through the first half the game was tied at 14.  With one and a half minutes left in the half the Cougars have taken a twelve-point lead, 35-23.  The Cougars take a 37-27 lead into the half, they capitalized on MCC turnovers and missed shots.

Khari Holloway led the T-Birds with 26 points and Mitch Burnett added seven rebounds.  On February 11 Mesa was notified SMCC would have to forfeit due to an ineligible player. 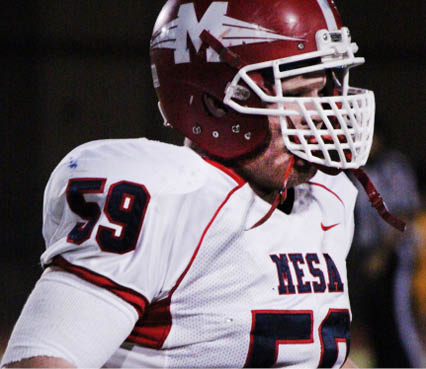 Honoring some of the best MCC football athletes

How the Big 12 Conference Was A Waste of Time