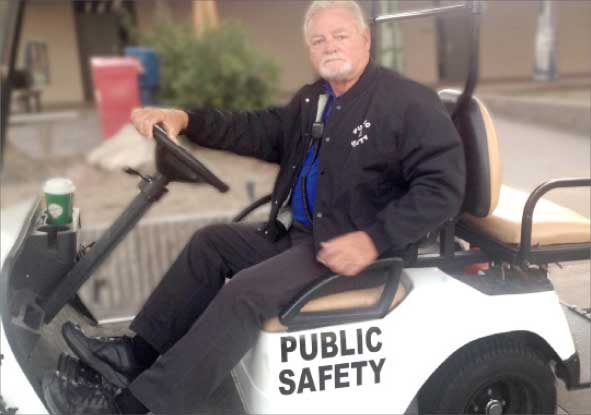 Theft is the highest reported crime on Mesa Community College (MCC) campus, yet a new report shows the rate of campus theft has dropped by a whopping 50 percent. Local authorities say it’s because of surveillance.
MCC Public Safety department has increased the number of surveillance around campus and parking lots as an extension to the police patrol. “Seventeen more cameras have been placed around campus, making a total of 88 cameras; and by the end of 2017 at least 20 more cameras will be added,” said MCC Police Sergeant Jack McClaren.

Public safety official also said the persistent presence of Public Safety officers by bikes, carts and on foot, helped in being a deterrent for crime. In 2016 Annual Campus Safety and Crime Report shows in 2015 there were 42 reported theft incidents, compared to the 84 incidents reported in 2014. “Back before 2014 we got hit hard with vehicle burglary and theft,” McClaren said.

McClaren said between 2013 and 2015 the department had received a number of reports of people coming onto campus, breaking into vehicles and stealing personal items. He adds, “This increase in theft caused great concern for the Public Safety department.”

Since then the presence of public safety officers has been strengthened by the visibility of officers and the increase in technology. “After that our patrolling picked up more in and around the parking lots,” said McClaren. By the end of the 2017, Public Safety officials will have placed over 100 surveillance cameras throughout campus. “We are able to zoom in and out of people’s cars but we only do that if there is suspicious activity,” McClaren said.

MCC students and staff are also expected to be part of lowering theft. Public Safety Commander Steven Lieber said he wants people to practice situational awareness, which is being aware of their surroundings. “We all get tied up in our day-to-day lives that we forget our surroundings,” added the 30-year-law enforcement expert Lieber.

Lieber said he would advise students not to walk alone at night to their cars and to have the school campus emergency number ((480) 784-0911) on their phones. “Using the campus emergency number will get help faster than the Mesa Emergency number since there are police officers already on campus,” Lieber added.
“We care about the staff and students here in MCC,” McClaren said. “We strive every day to create a safe learning environment,” he added.

Grand geology adventure at the canyon