A figure that I don’t feel receives enough recognition when we think about all the great African Americans in history is heavyweight boxing champion Jack Johnson.  I was introduced to this man last year when I stumbled upon a Ken Burns produced documentary titled “Jack Johnson: Unforgivable Blackness.” To say I was impressed by Jack Johnson and his life would be an understatement.

Aside from slightly resembling my father, I connected with Jack because of the amount of the strength, courage, and success he displayed in a time that I always imagined was immensely terrible for people of color.  Images of him well dressed in expensive suits while smoking cigars behind the wheel of nice vehicles; or seated with white women shamelessly embracing him-totally shattered my perception of what was supposed to be possible for black people in the Jim Crow era.

The photos almost seemed unreal to me.  Then on top of that, what the man did for a living was knock out white men in the boxing ring.  This all has to make him one of the most disruptive individuals in history.  At a time when black men were being lynched at disturbing proportions, Jack lived his life the way he wanted to: independent, free and fearless.

Johnson was what we refer to down in Houston as “third coast born, Texas made.” Born in Galveston in 1878, he’s a pioneer of the gold teeth style that would become a huge part of that region’s culture a century later.  Jack was often photographed with a wide smile showing off those teeth. But of course, not everything was glitter and gold for Johnson.

His rise to fame as the heavyweight champion of the world was rough and sometimes even shameful.  For money, a young Johnson would participate and often win in a little white supremacist spectacle known as “Battle Royal.” Six to 10 young black men would be blindfolded in a back room and made to swing punches at each other until the last one was standing. 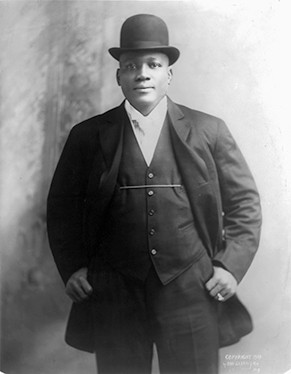 He’d work several petty jobs, but by the age of 18, Johnson was sure he would have a successful career as a boxer and so began to take on the underground boxing world across American cities. He found the success he knew he would and eventually garnered the attention of the most well-known prize fighters of the day.  Many of them, like champion Jim Jefferies for instance, refused or were reluctant to fight black fighters, especially Jack.

But after defeating the younger brother of the greatly admired Jefferies, Johnson finally got a chance to go toe-to-toe with Jefferies after defeating former heavyweight champ Tommy Burns. In the fight against Burns that took place in Australia, the tape would be cut short when replayed in America to avoid viewers from witnessing Johnson actually knock him out.

In those days, the title of heavyweight champion was sacred and considered something like being the “Emperor of Masculinity.” So for that title to go to a Black man was very disempowering to white men at that time.  This is one of the earliest examples of sports being racialized in America. Because of his relationships with white women and a subsequent criminal charge they labeled as “white slavery,” Johnson’s legacy was tarnished and is the reason he is today not celebrated in the manner I believe he deserves. I believe he embodies everything it means to be a true, free “pure-blooded American.”

T-Birds come out ahead against Paradise Valley

Joe Jacquez Mesa Legend The T-Birds scored four runs in the second inning, and that proved to be all
Read More
08/25/2017

Thunderbird football program at risk of being cut