The Glendale Community College (GCC) men’s basketball team visited Mesa Community College (MCC) to take on the undefeated 5-0 Thunderbirds. The Gauchos came into the game with a 5-3 record this season. Mesa comes in seeking to extend their winning streak for the season and continue it into their Arizona Community College Athletic Conference (ACCAC) games. It took a while for either team to score. Mesa shot once within the first two minutes of the game as they gave the ball away twice in that same span. Glendale never took any advantage of those turnovers.

Once Mesa guard Austin Dunham made a steal it lead to a three-pointer by forward Noe Anabir for the first points of the game, assisted by guard Obi Megwa. Mesa’s sloppy play had ended, but Glendale wasn’t done yet as they allowed Mesa to go on a 7-0 run committing two turnovers of their own.  As they neared the 10-minute mark in the first half with a score of 18-11, the Thunderbirds led the Gauchos’ guard Avery Smith scored six straight points bringing the deficit to three points at 20-17. Mesa then matched Smith’s run-scoring seven points in a row and shutting-out Glendale after he committed a foul and was brought out the game on a substitution.

Big shots by Obi and guard Jamil Wilson-Jones gave Mesa a 10 point lead with a score of 27-17 and the momentum shifted as time came close to five minutes left in the first half. The game took another twist as Glendale took a 31-30 lead with about two minutes left in the first half, going on a 14-3 run. Glendale guards Christian Hakilimali and Chandler Solis came in to finish the half while expanding the lead to 34-30.It seemed with such little time left in the half and the large comeback Glendale had put on, that they would finish with the lead going into the break, but Mesa Coach Sam Ballard called a timeout before the half ended. He encouraged his player to play tough and smart going out there for one minute to reclaim the lead. 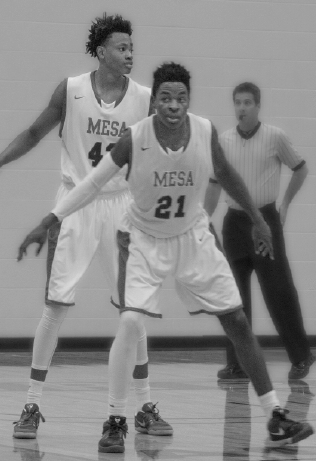 Right out the gate, Wilson-Jones shot a quick three-pointer. On the next offensive possession, Austin Dunham made an old fashioned three after being fouled on a powerful two-handed dunk. He made the free throw bringing the score to a 36-34 lead for Mesa and an even greater momentum going into the half. As the second half began Mesa jumped ahead quickly to a 49-41 lead forcing Glendale to call a timeout. Despite Hakilimali’s 10 points in the half, the Gauchos were never able to get some scoring. Trying to help make a Glendale comeback was forward Dominique Bradley who had eight for the half. The closest Glendale came to the Thunderbirds was seven points as there was a steady lead unlike the first. Mesa expanded the lead as time went on leading as much as 15 points for the first time with nine minutes left.

Two mesa starters, Megwa and Anabir, had scored just under double-digits with nine points each as guard Michael Vas-Otin had a big half coming off the bench with 12 points on 5-7 shooting. Jamil Wilson-Jones finished with a double-double with 14 points, and 11 rebounds. Altogether Anabir, Megwa, Wilson-Jones and guard Michael Vos-otin had a total of 57 points, in addition to guard Austin Dunham contributing 10 more points to finish the night.
While Glendale Hakilimali and Dominique Bradley coming off the bench had a total of 25 points on 9-17 shooting, their efforts were not enough to help the Gauchos upset Mesa.  At the end, Vos-Otin’s two free throws the score grew to an 82-67 lead. From there the game ended with a score of 85-70 with a convincing Mesa victory keeping their perfect record now at 6-0 and in second place in the ACCAC conference behind Tohono O’odham Community College whom they will face December 7 at 7:30 in Mesa.

By: Warren Younger After a long season for MCC, the T-Birds wrapped up the season with a title. It j
Read More
03/04/2018