The no. 19 Mesa Thunderbirds fall to the powerhouse no. 3 Glendale Gauchos after a bitter five round match.  The matches were all hard fought and close. The rounds ended 21-25, 25-19, 20-25, 26-24, 17-19. Glendale came out swing in the first round. Taking the lead and not being very forgiving. The punishing spike of the Gaucho no. 5, Tara Melton, proved to be a big problem throughout the whole match. The second match easily won by MCC who took control early and lead the whole round. This was a real motivation boost for the T-birds. Getting calls their way and definitely taking advantage of the height close to the net. The defense from the Mesa outside Hitter Paige Greenly was crucial in taking the round.

Beginning the third match, the emotional heat certainly rose. After being down big, the Thunderbirds lead a high intensity come back to shorten the 11-18 Glendale gap lead to only being within one point, 18-19. The pressure was placed on both Leah Crist and Paige Greenly to defend the Gaucho attack at the net. Much to crowd disappointment, the round came to a bitter tasting defeat for the T-birds. The Glendale Gauchos took the round 20-25. The fourth round began with quite an excitement as the birds went attacked quickly and taking the lead on Glendale. Yet the powerhouse Gauchos would not go down without a fight by keeping the game close. Both teams sent rocket hit at one another exchanging the lead several times until the intense Glendale offense was able to pull up a 6-13 lead on the T-birds. 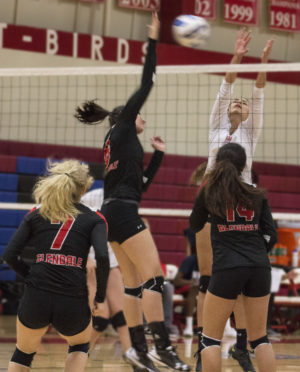 After losing the edge, MCC didn’t seem to hold together. The Glendale canon blast riddled the Mesa defensive line. Yet hope was not lost as Kahri Harrion began to serve. Mesa pulled together in order to tie up at 22-22 late in the set. Our miracle birds stole the show taking the incredible round 26-24. Though having taken a brutal beating the T-bird tied the matches at 2-2 Glendale took the scoring lead early on in the fifth and final match. The Gauchos kept piling on the points. After being down 3-9 Mesa attempted to mount their second comeback of the night. They finally pounded back to cut the lead down. The true heart showed as they pulled together as a team to tie up the round. The lead was exchanged many times until finally, Glendale managed to take a 17-19 lead to end the 5 round. This Mesa squad put up a valiant fight proving worthy of the competition. Our Lady Thunderbirds are proving to be a real playoff contender. The clock ticks down and this mostly freshmen team has some true potential. Only two more games remain in the season as we approach the national championships. Definitely keep your eyes out for our Thunderbirds

Volleyball winless as they fall to Yavapai

By: Warren Younger The T-Birds played hard but fell in straight sets against Yavapai College in the
Read More
11/06/2019