Arizona recently drew the nation’s attention when the presidential candidates of the two largest national parties visited the state. Donald Trump spoke at a rally held in Phoenix, making his case to voters on Oct. 29 at the Phoenix Convention Center. Prior to taking the stage, former Arizona Gov. Jan Brewer (R) and others supporters addressed the crowd; at one point the crowd joined together chanting “lock her up” in response to when Brewer said “now Hillary, that’s a whole ‘nother story” following an appeal to supporters about what they should do to assist Trump win the election. 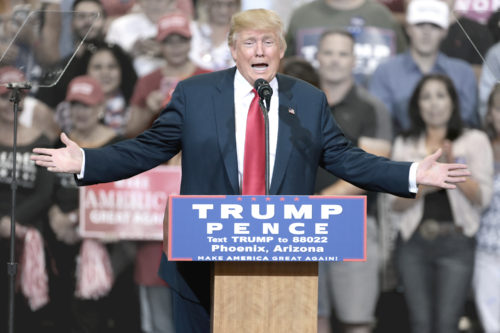 State treasurer Jeff DeWit invited Trump to the podium, mentioning some of the scandals that have recently surfaced during the election before doing so. Dewit also shot a t-shirt gun into the crowd, with the stated goal of showing favor of Second Amendment rights, and said that Trump, “like here in Arizona, will protect the Second Amendment.”  Trump didn’t waste time accusing Clinton of being corrupt.

Trump said “Hillary put the office of Secretary of State up for sale, look at what’s happened. And if she ever got the chance she would put the Oval Office up for sale also.” Corruption in politics was a theme throughout Trump’s speech, as he also alleged corruption in the Chicago political process, which he attributed to President Obama, and pointed to this as an example of the nation as a whole.

Trump also spoke of his anger at the government for not preventing China from joining the World Trade Organization, linking this event with the loss of manufacturing jobs and factories in the United States, as well as what he referred to as “Hillary’s “I’m very close to China. I’ve done great deals with China, they’re tenants in buildings of mine in New York … I’m not angry at China, I’m angry at our people for allowing them to get away with it,” Trump said. 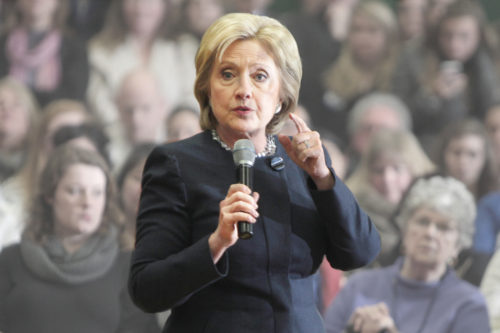 A few days later on Nov. 2 Clinton held her own rally at the ASU campus in Tempe, which was on the same day that Mike Pence was the focus at his rally in Mesa held at the Mesa Convention Center. The tone of the Clinton rally was quite different; rather than professional politicians, the speakers that directly preceded her appearance on stage were Arizona citizens.

Tuscon high school teacher Gary Crane said of Clinton, “in the White House she will continue to fight for all of us, and the values we share.” Clinton expounded on the policies that Crane suggested, such as immigration policies that helps immigrants that come to U.S. Clinton didn’t pull any punches, bluntly describing her opponent’s negative attributes.

“Imagine having a President that demeans women, mocks the disabled, insults Latinos, African Americans … who pits people against each other instead of pulling us together,” Clinton Hillary also postured against Russia, and took her stance against the nature of the relationship between Trump and Russian President Vladimir Putin, characterizing Trump as someone who “praises adversaries like Vladimir Putin, and picks fights with our allies, and even insults the pope.” With the race coming to a close, both campaigns are doing what they can to sway the electorate before election night on Nov. 8.