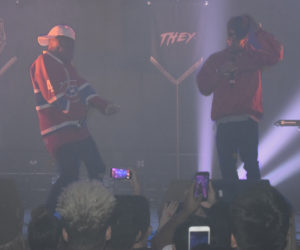 Alternative R&B duo THEY. had their first official show in Arizona at Club Red in Mesa on March 12.  The NÜ Religion Tour followed the release of their first studio album.  Fans who purchased tickets to the show also received a free download of the debut They. album “NÜ Religion: Hyena” in their emails. This selfless and community-based act by the band sets the tone for their interaction with audiences.

THEY. put on an incredible concert, showed fans love, and most important of all, produced quality music.  “NÜ Religion Hyena” begins with the “Hyena” intro. The introduction is a cacophony of harmonized vocal and mixed up sounds. The bass and drums launch us suddenly into the first full length song “Africa”. “Africa” is huge song with beating drums and throbbing bass. The lyrics sing about the wants of money and resources in the “city of broken dreams”.

As the album progress we are treated to what are perhaps the bands best bars on the song “Motley Crue.” The group raps and croons and their hopes and dreams. They also sing about retribution, god and riding down sunset boulevard forgiven.
Later on the album we get the song “Truth Be Told.” This song might have the strongest lead melody on the entire album as THEY. waxes poetic about life’s circumstances, situations and points-of-view.  THEY. sings, “Say something, know that there’s two sides to every story/ trying to call the shots but you don’t even got the gun.”

They go on to sing, “Don’t say I didn’t warn you/you should let go/put it all out in the open.” Further down the track-listing we get two songs with a faster tempo and more aggressive feeling. The first “Say When” is a bombastic charge of adrenaline and shouted lyrics.  The group raps about starting the new wave of creativity in the face of adversity. The songs themes address reediness and accountability in the street. At one point the group goes as far as to say, “Watch how they show all this money way deep in my pockets/ and tell me to stop it/ do what you do, yeah that’s cool/ but for me being neutral was never an option.”

The second savage track in the listing is the gripping “U-Rite”. This song showcases the bands louder side and features vocal that are nearly shouted instead of sung. “When you put it like that you right” the group shouts at the audience until they slip into singing about relationships, infidelity, and trust.  The song seems to document an intense argument between the performers in the band and the women in their lives.  The band treated fans to an incredible show where they performed nearly every song in the track-listing. The band performed for over 40 minutes and played “Say When”, “Truth Be Told”, “U-Rite”, “Dante’s Creek”, and “Motley Crue”, among others.

The band also treated dedicated fans to unrecorded songs, not yet released commercially and songs released before their debut album including “Back It Up” and “Bad Habits”.  “NÜ Religion:Hyena” can be found on Soundcloud, Spotify, Apple Music, and ITunes.  The band can be found on Instagram @they, on twitter @unofficialTHEY, on Facebook as THEY. and on their website: unofficialthey.com.

Karlyle Stephens Mesa Legend Of course everyone is anxious. And as they always do, our leaders tell
Read More