Coming into the game, the Lady T-Birds were 1-11 after playing six sets of doubleheaders against mainly Division 1 teams.  Mesa started Division II play with a match up against the GateWay Community College Geckos.  In game one of the doubleheader Kendra Whalen lead off the first inning for the Lady T-Birds with her first homerun of the season.  The Geckos quickly answered, scoring five runs in the top of the second to give them a 5-1 advantage going into the bottom of the second.  For Mesa, starting pitcher Samantha Christensen only lasted 1.2 innings after the Geckos jumped out again, loading the bases and looking for more.  In the bottom of the second, Mesa scored three times cutting the Geckos lead to 1. They were now down 4-3.

Now in the bottom of the fourth, Mesa came up to bat and scored three more runs to jump ahead of the Geckos for the first time, 7-6.  The Geckos then tied the game in the top of the sixth, only to see Mesa come to bat the next half and take the lead once again.  In the end, Mesa overcame a five run second, beating the Geckos 8-7.   Alyssa Gallegos dominated the game for the Lady T-Birds, going 4-4 with a double and five RBI’s.  Kayla Bradford also helped Mesa scoring her first homerun of the season.  In the game Mariah Gonzales went 1-3 and had a double and Alina Lopez went 2-3 with a triple.  Brylee Coplan-Kay came in and pitched five solid innings, earning her first win of the season in which she is now 1-3.

The second game started with the Geckos scoring three times and once more in their half of the second.  When Mesa came to bat in the bottom of the second, they were down 4-0 and were able to score three times to cut the lead to one.  Even after cutting the lead to one, Mesa surrendered four more runs to the Geckos, improving the Geckos lead to five.  In the fourth the T-Birds answered, scoring three more runs to only be down by two, 8-6.“You are only down 2-0 girls” coach Grady Moorhead told his team “Compete and win every pitch.”  In the top of the fifth, the Geckos plated one more, extending their lead to three.

In the next half Mesa came back fighting, scoring four to take a 10-9 lead.  The next inning, Mesa followed by adding one more to take an 11-9 lead in which they never gave up.   Mesa won 11-9, sweeping their first set of doubleheaders this season.  Alina Lopez went 2-4 in the game with four RBI’s. Both Brittney Ramos and Meggan Horn had doubles in the game.  After being chased from the first game, Samantha Christensen came in and pitched four solid innings, only giving up four hits and getting her second win on the season, improving to 2-3.  Mesa now sits at 3-11 on the season.

Next up for the T-Birds is Scottsdale Community College at 1 and 3 P.M. on March 3 at home and on March 5, College of Spokane comes in for two on March 5 at 1 and 3pm.  “After playing 14 games we are playing better and as team each week and overall, the team and the coaching staff are working better with one another,” said softball coach Grady Moorhead.  “The kids have all gotten used to my teaching and coaching style. We seem to be meshing well and have better chemistry and a better relational dynamic moving forward,” said Moorhead.  “For one we could improve on the little things such as fundamentals and situational softball.   So far I feel as though we have had several players improve and put their best foot forward for themselves and for the team.”

“Kendra Whelan started the season with a 10 game hit streak.  Alina Lopez has been solid behind the plate and offensively.  Sam Christensen has been consistent in the circle.  Alyssa Gallegos has shown a lot of maturity as a freshman.  The team is competitive despite our record.  The games are exciting, fast paced and we are moving into a portion of our schedule where we will have success and lets be honest, you can’t beat the weather. “So if I could describe the season so far in three words I would say Room for improvement,” said Moorhead.

By: Warren Younger Mesa Community College came into the game against Eastern Arizona on a two game w
Read More 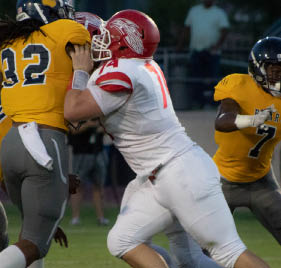