Ever since 2015’s San Diego Comic Con released a trailer for the up coming film Suicide Squad that would be released in 2016, fans of the DC franchise everywhere were excited. As months passed and as more trailers were being released, more excitement and hype was being made about the film.  Even fans at the 2016 Comic Con conventions were dressed as the favorite villain couple from the new movie; where the villainous couple would take the screen together for the first time in a live action movie.  When the film was released on August 5th, and the premier hit New York on the 1st of August, many fans were quick to turn to Rotten Tomatoes for the critic’s reviews. However, many fans were quite upset and confused by the low scores. As of now the score from the “tomato-meter” sits at 26% from critics and 69% from the audience.  The trailers made it seem that the movie would be the next best thing since Dead Pool. This movie gave many fans a first look at a live action movie of many comic book character favorites such as: “Dead Shot, Harley Quinn, Killer Croc, Boomerang, Diablo and Enchantress” along with other favorites. 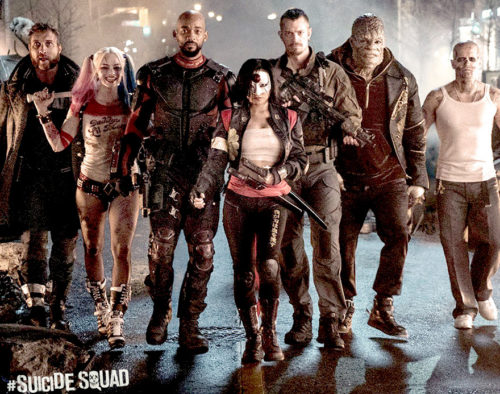 The movie brings these criminals together to help save the city being attacked, but also gives the back-stories of how these villains became criminals in custody.  The movie has made $477 million in global sales of tickets even with the negative reviews it has received from the press and critics.  Many online arguments can be found throughout Facebook, Instagram and Twitter.  On Twitter, by searching the hash-tag #suicidesquad one can find millions of Tweets from users, outlining their thoughts and feelings of the movie.  Even with the bad reviews, fans still went and saw the movie. Most people will use Rotten Tomatoes as a way to see how the critics feel, but that does not stop the fans from still seeing these movies.  Cameron Dillingham still enjoyed the movie “I think the critics really treated this movie unfairly, this movie is better than half the marvel films I’ve seen. The way critics bashed the movie didn’t scare me from seeing it, I enjoyed Batman Vs Superman, it wasn’t the best movie I’d ever seen, but it was still good. I came into this movie not looking at what the critics said and I wasn’t disappointed, it delivered a satisfying movie and one that I wasn’t disappointed from, I’ve seen it twice and enjoyed both screenings.”

Cameron did enjoy this movie but did have a few a few things that he wishes were different “I would have liked to see more of the back story of some of the other characters and more of Killer Croc, Boomerang and the Joker.” Clay Cannady also loved this movie but had a few things he wishes were different as well “The movie was the best representation of DC comics on screen so far. Harley Quinn was portrayed perfectly and stole the show. The only issue I had with Suicide Squad was that they made the Joker a stereotypical gangster with a grill and laid on the cheese a bit too much in back stories. Other than that it was perfect. First time everything in a DC movie (besides the grill) came straight out of the comics.”  The Joker was shown many times throughout trailers but the movie itself shows little screen time of The Joker, which fans were expecting more of.  Most of the scenes of the Joker are flash backs of him and Harley Quinn as the rest of the actual plot of the movie is a few short scenes, leaving the ending of the movie open to a possible Joker and Harley Quinn movie.  Rumors have also surfaced that there could be a possible spinoff of the ladies of DC such as “Harley Quinn, Poison Ivy, and Catwoman.”

‘Star Wars’ is more than just franchise to dedicated fans

Aaron Ruacho Mesa Legend “Star Wars” is much more than a franchise; it has become a way of life for
Read More
03/31/2015