Mesa Thunderbirds baseball continued to roll through the non-conference part of the 2016 schedule defeating the Grand Canyon University Club team 11-1 on Wednesday afternoon at Mesa Community College.  The victory was MCC’s fourth in a row with all the games coming against club teams from the big three in state universities.  After each team failed to score in the first inning, MCC jumped on GCU’s starting pitcher in the bottom half of the second scoring two runs to take a 2-0 lead setting the tone for the rest of the game.  After the Lopes failed to answer in their half of the third, the T-Birds extended their lead with a two-run third and scored one run in the fourth to take a 5-0 lead.

MCC sealed the win with a four-run fifth, and added two insurance runs in the seventh. The Lopes got on the scoreboard in their portion of the seventh thanks in part to an errant throw to first by second basemen Drew Lawrence trying to complete a ground ball out.  Lawrence has been asked to move from the outfield to the infield due to injuries by Head coach Tony Cirelli and is still learning his new position.  “He is an outfielder by trade, so we’ve moved him in and he is working on it and he is getting better,” Cirelli said. “It’s a physical mistake and he’s just ironing that out.

That ended a scoreless innings streak by MCC pitching to start the young season.  Sophomore left-hander Matt Mosca out of Las Vegas, Nev. got the start for the T-Birds and pitched 5 innings of scoreless baseball scattering three hits with a 6/0 K/BB ratio, good enough to earn his first victory of the season.  Aside from some early wildness partly caused by nerves in the first, Mosca had every pitch working and for him it’s all about focus and the glove with every pitch.
“Sometimes I would miss with the fastball, and I would just try and come right back with it,” Mosca said. “Instead of worrying who was hitting I was just trying to hit the glove with every pitch no matter who it was.”

Head coach Tony Cirelli was encouraged with what he saw out of his starter: “He’s got to command his fastball, and throw it for strikes,” Cirelli said. “He’s got a pretty good breaking ball, and so if he can command his fastball that is a key for him.” Making his first appearance of the season, Freshman RHP Chase Merriman pitched two innings allowing one unearned run and two hits in relief of Mosca. Mesa scattered their hits among eight batters led by Freshman Esteban Martinez of Oak Forest, Ill. who went 2 for 4 with a double and three RBI’s.  Cirelli tries to teach his hitters to focus on the two things that they can control: plate discipline and timing.

“The pitch selection has got to be a big part of it, they have been getting a lot of walks lately so that’s good.” When MCC got on base via the walk or a base-hit, the T-Birds were able to cause havoc by stealing bases. “We want to make them stop us,” Cirelli said.  Looking back on how the game progressed, Cirelli was happy with his team’s performance as a group.  “If you play good defense and you run the bases good things will happen,” Cirelli said. “We just try to be fundamentally sound, these are early nonconference games but nothing really changes.”
Just play situational things and execute that will play against anybody so hopefully we will continue to execute.”

MCC went on to beat Arizona State University’s Club team in a tight high scoring affair 8-6 on Friday, and then the offense really came alive on Saturday as the T-Birds swept a doubleheader 20-1, 14-0 against the University of Arizona Club team.  MCC is now 7-0 and will go on the road to face Arizona Christian JV Tuesday at 3:00pm. 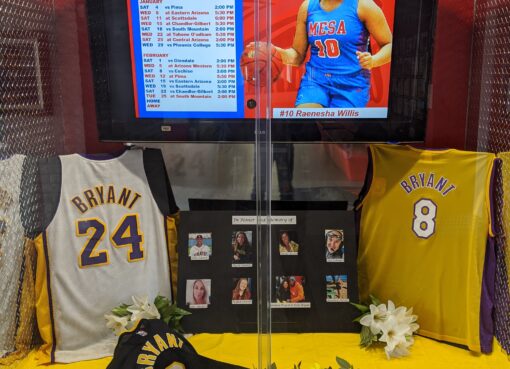 On January 26, Kobe Bryant, his 13-year-old daughter Gianna, and seven other passengers were killed
Read More
02/29/2016

T-Bird is here to save the day