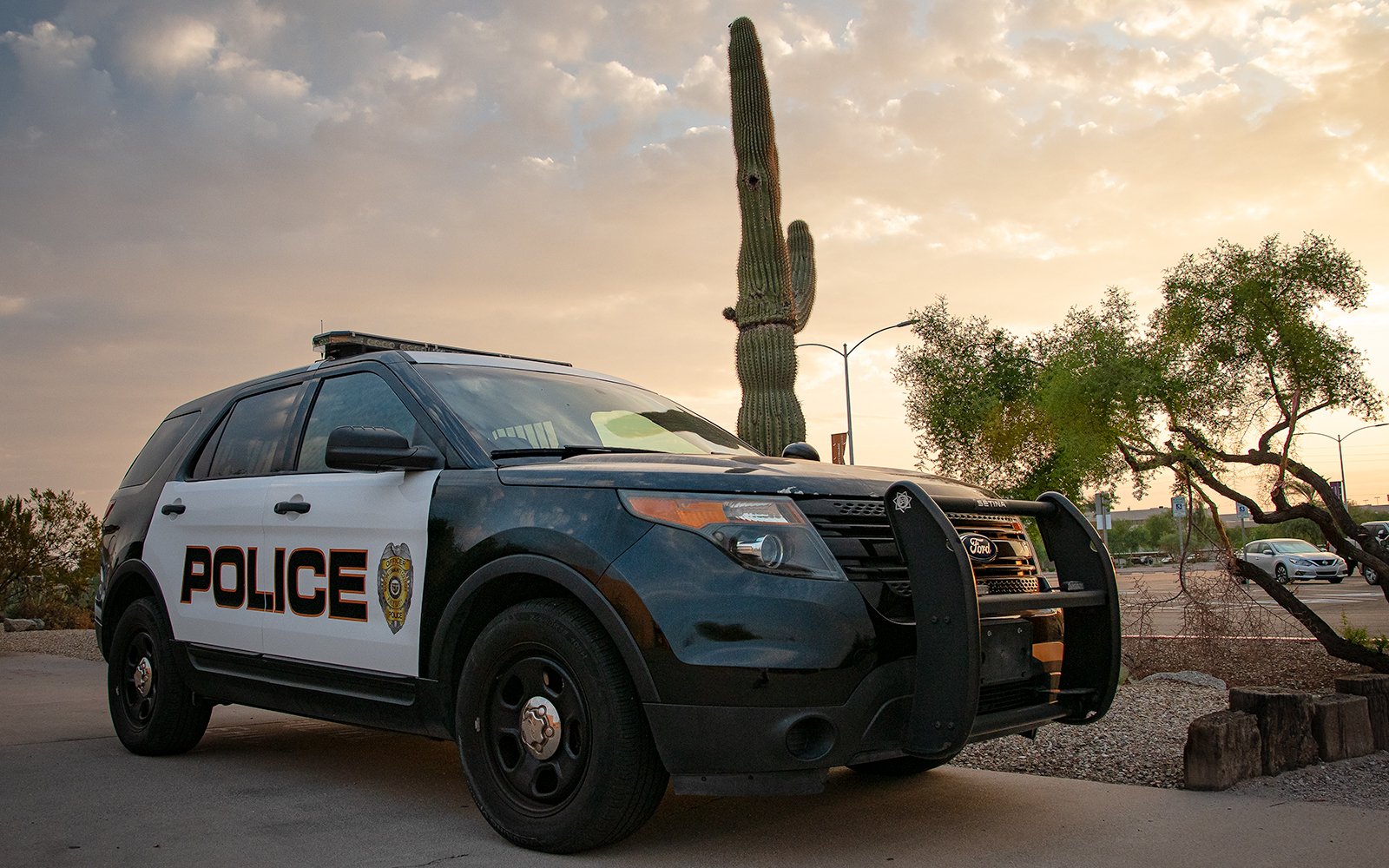 According to the Bureau of Justice Statistics, an estimated 14 in every 1,000 persons age 18 or older are the victims of stalking over a 12-month period. (Photo by Monica Spencer).

Mesa Community College (MCC) cultural sciences professor Rod Golden is continuing his focus group series on Oct. 21 with a virtual breakout session on the signs and dangers of stalking and cyberstalking.

The lecturer’s return comes as a relief to many after his postponement in April due to the COVID-19 shutdown. One of the main draws is the openness to which Golden allows attendees to speak about the experiences of their lives.

“I want to give individuals who have been through this a platform where they can share…” Golden said. “Stalking leads to murder, and we have to take this seriously.”

Professor Golden has been doing focus groups for the past four years on topics such as rape culture, anxiety and depression, domestic violence, trigger aggressions and mechanisms and more. The events are popular; 110 people ate and shared their experiences with mental illness at his anxiety and depression talk last semester. Now, he hopes to carry on the pastime online by taking on stalking, an issue in which Golden believes college students are particularly vulnerable.

“Stalking is a huge problem. It’s a part of the culture, like rape culture. So I thought this would be very important,” Golden said. “People who are in intimate relationships like a marriage or such, and that relationship ends, that’s when the stalking begins.”

Arizona statutes define stalking as knowingly engaging in conduct directed toward another which causes fear of personal safety or safety of their immediate family members. It can occur electronically or in person. Stalking incidents that happen on campus or occur between students and staff are also susceptible to further punishment under Title IX regulations and the Clery Act, the latter of which has had additional amendments added to help prevent domestic violence incidents.

Stalking frequently occurs after a romantic relationship ends. According to the Bureau of Justice Statistics, women experience stalking victimization at a higher rate than men. However, men, according to Golden, often suffer in silence from a lack of social support in stalking incidents.

“We want to make people realize that, regardless of your standing, you can be stalked,” Golden said. “So, that’s why I wanted to do a breakout session with men, because men feel like, when you are a man, you can’t be stalked… The thing is, men are flattered when a woman is attracted to them and is obsessed with them and stalking them. We think that’s flattering. That’s not flattering. That’s dangerous.”

Golden mentioned a personal male friend who had died from an incident related to stalking. This experience and others, he said, emboldened him in his work. He found the motivation to begin the discussions which he believed must be brought into the public eye.

His experience with stalking isn’t isolated. His chosen colleague and guest speaker, Bobbi Sudberri, founder and CEO of Kaity’s Way, also experienced a traumatic loss due to the crime.

“She comes with a very unique perspective on this because her daughter was murdered by her daughter’s ex-boyfriend,” Golden explained. “She has done focus groups in the past on these very sensitive subjects.”

Digital threats are the latest evolution of stalking, according to Golden, and students are particularly vulnerable due to their connectivity.

“They can stalk you through technology–via phone, computer, and then your different social media chats, and then through other people, who are friends of your friends,” Golden explained. “People who can stalk you don’t even have to leave the house. In fact, I’m going to take this a step further. They can stalk you for hours and hours throughout the day without having to leave home.”

As Golden prepares for his focus group in October, other MCC staff are working around the clock to prepare students to face the potential threat. One of them, Police Cmdr. Steve Lieber of Maricopa County Community Colleges, also believes stalking poses a serious threat to student safety, especially online.

“Child crimes, a lot of the time, tend to start off on the internet. Stalking seems to be the same. You’ll see them start up a chat in a chatroom, and somehow they will think some type of relationship has started to develop when there really hasn’t,” Lieber said. “Somehow they’ll start sending hundreds of messages, or they will find out a physical address or a work address from another party, and they start showing up at their business or at their house.”

Lieber also believed stalking cases were particularly difficult for victims to deal with due to their likeness to romantic interest. Oftentimes, younger students will confuse potentially harmful attention in personal or digital spaces for romantic interest, and set in motion a dangerous meeting with their stalker without knowing it. The situation is made even more difficult when prosecution of these actions is taken into account.

“These kids that are being put into multiple housing environments and social housing environments; they really aren’t used to it,” Lieber said. “What we have found in a couple of these incidents is that it could have been a stalking violation, but there really has been no indication from the victim, whether guy or girl, to say ‘no’ to that person.”

He noted he was aware of the potential fear that comes from saying no to an interested party, and offered anyone who may be sincerely afraid of such a confrontation to ask campus police for assistance.

He also said it is important for campus police to know about a stalking incident, even if a victim doesn’t want to prosecute a person for stalking, because they are required to report it to the Department of Education. Stalking has become increasingly serious over the years due to the severity and number of violent outcomes involving the crime.

“We haven’t seen any stalking incidents on campus, and of course, nobody is on campus right now, but I can assure you our police departments are responding to those crimes,” Lieber said. “I know they are happening. We monitor Mesa PD [Police Department] radios here, and we hear them responding to calls for service out in our community all the time that reference these types of calls.”

The data on stalking and other crimes reported on MCC’s campus are available at mesacc.edu/college-police/policies-crime-statistics.

Lieber continued to explain the signs of stalking: numerous unsolicited messages, someone showing up to your home or car when they shouldn’t be, someone being in your classroom when they don’t take that class, threats against yourself or your friends and family, or physical damage to your property.

In addition to this, the Bureau of Justice Statistics has found that 1-4 people who experience stalking also experience some form of cyberstalking. The prosecution of which, according to Lieber, is especially difficult without recorded evidence.

“If you start receiving stuff like that, document it. That is very important for law enforcement and prosecution,” Lieber said. “If they send you multiple text messages–I don’t care how many it is–save them. Download them. And then give them to the officers when they get there. Same with voice messaging. Boy, that looks good in court.”

“We don’t want anybody to get hurt,” he continued. “If you truly believe that you have someone who is stalking you, it is most important to report it and document. There are a number of measures that are offered to you… We want to make sure that the person understands that no means no.”

Another rallying voice for student safety is Ronald Thayer, MCC senior technology support specialist and instructor of the PED101DF self defense course. Thayer is a fourth degree blackbelt in the art of Kajukenbo and a professor who has been teaching self defense courses on campus for over eight years. According to him, students sign up for lots of reasons: to get in shape, build confidence, and to find the tools to deal with their past traumas.

Thayer offered a list of tips for students to use when dealing with potential stalking incidents. Whether in-person or online, these tips could help anyone worried about the dangers of stalking.

Students interested in participating in Golden’s upcoming stalking focus group can join on Wed. Oct 21 through this link: www.mesacc.edu/event-stalking. For anyone looking for immediate counseling for a stalking issue, contact professor Golden at rod.golden@mesacc.edu or MCC counseling services. For immediate threats, please contact campus police and your local police force.

Correction: An earlier version of this article misspelled Ronald Thayer’s last name as Theyer. It was updated on September 24th.