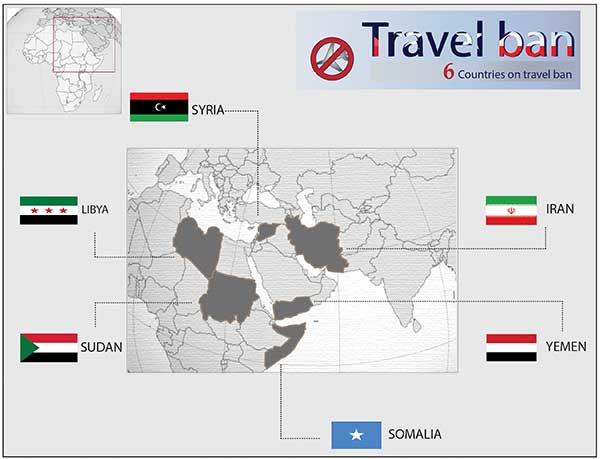 Anila is an Iranian immigrant who fears what the United States and her native government will do to her.  She also fears the recent travel restrictions by the Trump Administration will never allow her to see her parents again. She attends Mesa Community College (MCC) and didn’t want to share her last name because of fear authorities in both countries would take actions against her and her family here, as well as her parents and her brother’s family living in Iran.

Anila is Baha’i and legally immigrated to the U.S. about five years ago to escape religious persecution. “I cried a lot [the] first couple of nights because I was planning in the next year to go see my parents, or we were trying to bring them here,” Anila shared. The MCC freshman lives with her older sister and brother-in-law, who were already living Arizona.

She said she and her sibling planned to obtain a travel visa for her parent’s to visit the U.S. and stay with them for about six months, and then return to Iran.  She said her parents don’t want to permanently leave Iran because it’s their home country.  With the new travel restriction on people coming into the U.S. from six Middle-Eastern countries, which includes Iran, their plan seems unlikely.

Anila said even if she traveled to her home country for vacation and were guaranteed entrance back into the U.S. without any issues, she fears the Iranian government would detain her when she lands at the airport in Tehran. “I had a friend [who] went back home and they did not let her go at airport because they said you post something against [the] government,” Anila said.

Anila will tell you people of the Baha’i religion in Iran are not permitted the same opportunities as Muslims.  In 1979, there was a revolution in Iran when the Ayatollah Khomeini took over the government and became its Islamic leader.  According to Anila, her father and mother both lost their jobs because they were not Muslims. On another occasion her brother lost his job as a teacher for the same reason.

The family refused to say they were Muslim for their well-being or to even accept higher wages.  Her father, according to Anila said, “I won’t do it just for money, [I won’t] change my belief. My belief is [Baha’i] that’s it.” This is what drove Anila to leave Iran and migrate to Turkey, a country with more stable U.S. relations, and begin the refugee process to immigrate to the U.S.

“You can’t talk about your belief to somebody else. If you do that they (government) put you in jail, because they think that you want to make everybody else your religion. They’re scared of that. You, basically don’t have any right as a human being like other Muslim people,” Anila said.

Through the United Nations Refugee Agency she was able to stay in Turkey, live there for a year while going through the rigorous refugee immigration application process, which included several interviews and medical exams. Anila works and attends college in the hope a better education and a job that will help her reunite with her parents and other family members.

In the meantime, Anila is keeping a close watch on the foreign policy issues and regulations in the U.S.  When President Trump signed the travel executive order on immigration on Jan 25, she was worried, and then relieved when the Ninth Circuit Court of Appeals struck down the Order.  Now that there’s a new version of the travel restriction, or immigration ban, she said she’s still afraid.  For now Anila is working toward obtaining her citizenship this summer and for her this is her last hope of ever seeing her family in Iran again.