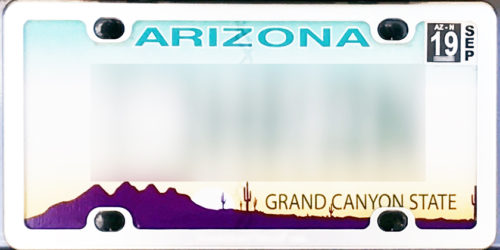 Arizona House Bill 2054 (HB 2054), introduced by Rep. Michelle Ugenti-Rita (R-Scottsdale), calls for the elimination of registration stickers currently required to be placed on Arizona motorists’ license plates. According to her, removing them would save an estimated $1.8 million in costs which can be re-invested in other areas. The stamp-sized, semi-permanent labels are applied to the license plate when motorists renew their registration. When renewed, drivers receive a paper registration placed inside their vehicle and a sticker which is to be placed in the upper right corner of Arizona license plates. Rep. Ugenti-Ria wants to eliminate this sticker entirely. “Is [the sticker] enough to justify incurring costs that otherwise we, as a state, don’t need to?’’ Rep. Ugenti-Rita asked, stating that saving taxpayer money is the reason for the proposed change. Motorists in Arizona can currently keep the same license plate for any number of years, with only the sticker changing.

According to the Arizona Department of Transportation (ADOT), the “law requires a vehicle owner to replace any issued license plate that has become damaged, deteriorated, illegible or unreadable.” Thus, the sticker is the only external physical means of viewing a driver’s registration validity, at least if you are not a cop. Law enforcement already has the capability of checking if a registration is valid by running a vehicle’s license plate through their onboard computer systems. Rep. Ugenti-Rita’s said this proves the stickers serve no purpose and are hard to see at a distance, especially when a car is moving. Additionally, Rep. Ugenti-Rita argues that ADOT does not require a car insurance sticker to be present. “If you’re pulled over, you’re asked for your registration and car insurance. You supply it to the officer.” Though, law enforcement is not the only concern some have had regarding the proposed bill. Compliance with the law is another element that must be considered. Rep. Noel Campbell (R-Prescott), said that having a physical tag visible on a vehicle makes drivers more compliant with the law.

“Some people would probably skirt around it and not do it and then take their chances on not getting stopped,’’ said Rep. Campbell. This is similar to how some drivers illegally operate a vehicle without insurance and merely hope not to be pulled over. HB 2054 does not eliminate the registration law entirely. Arizona drivers are still legally obligated to maintain current driver’s registration as well as liability insurance at a bare minimum. HB 2054 does away with just the sticker.  Registration cards can still be printed online from the ServiceArizona website or physically mailed by ADOT.  In 2008, ADOT changed the manufacture of Arizona license plates from using paint and being embossed to a new digital screening method. In doing so, the registration sticker denoting the month normally placed in the top left was removed and combined into a single month/year sticker to be placed on the top right.The Arizona Department of Transportation (ADOT) had no comment on the bill.

Rebekah Young The dating app Tinder is an innovative way for people to meet and start relationships.
Read More
09/14/2016

Nikki Waldmann Mesa Legend With forty-four common skin disorders, how can one keep up with all of th
Read More
11/10/2014

By: Kian Hagerman For students coming from distant places to attend school, news about events from h
Read More