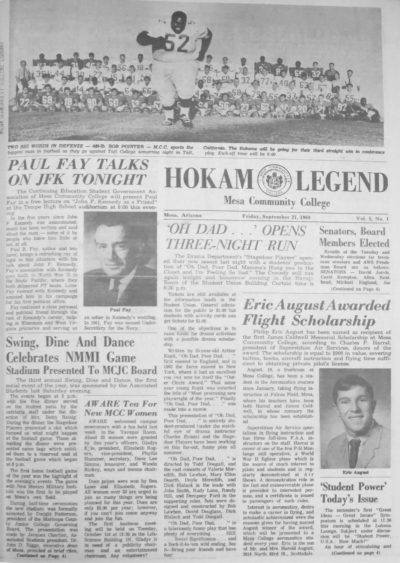 The MCC library intends to scan all available issues of the school’s newspaper, with the intention of making digital issues available to students.“It’s been approved, we’ve already got a purchase order to have the State Library, it is digitizing for us,” Jennifer Hunt, manager of the MCC library said. “So we will actually ship them to the State Library, they will digitize and send them back to us, so that portion has been approved.” Established as The Cub Reporter, The Mesa Legend changed its name to The Hokam Legend in 1964, though the first few years of issues are no longer available to be digitized.

The project to scan their newspaper archive is part of a larger initiative in the library to update the collection. “We decided to redo our entire archive collection,” Hunt said. “It had been done years before but it was time for a refresh, so we hired a professional archivist to go through the collection, and one of the things that she recommended was having these digitized both for preservation and for accessibility.” The exact method by which students will have access to these digital editions is not yet determined. “Once we get them digitized, our goal is to get them online so that students would be able to go through the old newspapers,” Hunt said.

The process will include all available issues of the newspaper, going back to 1968 through to the most recent volumes. Hunt said that students would be able to come to the library if they wanted to see a particular issue, and that microfilm or the physical copies would be available to them. “We could even email them the PDF copies, so they would have immediate access,” Hunt said. All that would be necessary to receive the document would be a request on the student’s part.

“They can get it by request, as soon as the digitization is done, which will be done before this semester is over,” Hunt said. “And the physical stuff, they can come in and make copies of this now.” An online version would be available, hopefully in a year according to Hunt. To find out more information about the project, one can visit the MCC library at the Southern and Dobson campus. Hours of operation are Monday – Friday 7 a.m. – 9 p.m., Friday 7 a.m. – 5 p.m., Saturday 9:30 a.m. – 6:30 p.m., and Sunday 2-8 p.m. during Fall and Spring semesters.