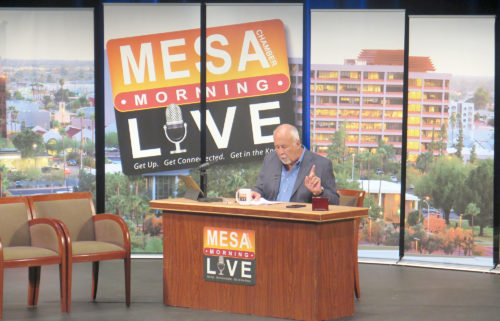 “Mesa Morning Live” was hosted by Mesa Community College at the Southern and Dobson campus Performing Arts Center on September 8. The Mesa Chamber of Commerce produces the broadcast which can be seen through cable television providers on Mesa Channel 11, or on Mesa Morning Live’s YouTube channel. The event provided breakfast for those in attendance before the show began on stage in the theater, where the special guest was new Mesa Police Chief Ramon Batista. After some opening remarks from MCC interim president Sasan Poureetezadi, and a performance by actors from forthcoming MCC PAC musical production “The 25th Annual Putnam County Spelling Bee” to begin the event, the show’s guests were brought on stage.

State Apprentice Program Lead for the Apprenticeship Arizona Employer Engagement Administration, Department of Economic Security William Higgins was invited up to be interviewed by host Mark Cordes. “The Department of Economic Security hosts an apprenticeship program along with 43 other programs for the state of Arizona,” Higgins said. According to Higgins said that they have 142 registered programs in Arizona, catering to 32 registered apprenticeships. “Construction, healthcare, IT business services, etc.,” Higgins said. “We just want to get out. I’m from here, Mesa; we’ve only got four programs in Mesa.” 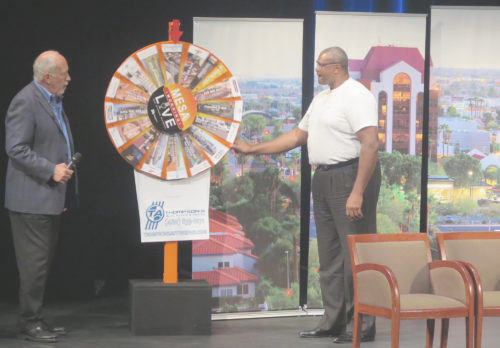 Higgins said the reason for him coming onto the show was that the government was trying to create more apprenticeship programs. “I will work with Mesa Community College, and it’s the alternative to college,” Higgins said. “We don’t want everybody incurring that debt that so many people have incurred over the past few years, going to a four-year college. This is the complete alternative; we have some programs where students actually get an associate’s degree upon completion and they’re making six figures.”

He added that while not every program is the same, that there are a lot of lucrative apprenticeship programs. Representatives of Ryan House, Executive Director Alyssa Crockett and Development Director Marghan Miller were brought up once Cordes and Miller finished their discussion.“Ryan House cares for Arizona’s most medically fragile children, and helps them navigate life-limiting or end-of-life journeys,” Crockett said. “So as our children who are diagnosed, maybe at birth or have suffered a traumatic incident are living longer lives because of these wonderful advances in medicine, Ryan House comes in and helps them live their best lives possible.”

Crockett added that Ryan House was community supported, with $3 million from local businesses and “good folks like you.”
Miller said that the reason for their appearance was to spread the word about their 13th annual Run for Ryan House, a competitive 5 kilometer run to be held in Riverview Park on October 7 at 7 a.m. in Mesa. “We welcome walkers, runners, strollers, dogs, anybody to come out,” Miller said. “And we also have a family fun walk.” Special guest Batista was last to come to the stage, where he began by introducing himself and describing some of his background that led to him becoming Mesa’s police chief.

“I always wanted to be a police officer, since, I think my earliest recollection is 10 years old and got to live out my dream in Tucson for 31 and a half years,” Batista said. “I did everything that there was to do there with just really a couple of exceptions, but this is just an amazing opportunity that came up the first part of this year and I’m simply honored and blessed to have the opportunity to be a part of the community and to be a part of this really terrific organization at the City of Mesa and Mesa police department,” Batista said. In response to a question about what challenges he had faced Batista said that having come “from just a hundred miles away, the issues are the same and really what changes is the acronyms are different, but so none of it has surprised me.”

Batista added that he wanted to be here for the long haul, and expressed his love for Arizona. Talking about crime in Mesa, Batista spoke about the program CompStat, where the district commanders talk to the bureau chief of patrol about what issues they are facing in their districts, with the goal being crime mitigation. “They identify the crime trends and they figure out the strategies to address them and mitigate them,” Batista said. “And that is one of the great things about Mesa, is that I came from a community that experienced very high violent crime and although violent crime really shocks the conscience… what I love about Mesa and the organization and the process that they have is that they have a way of pinpointing that crime and getting to it and mitigating it as soon as possible.”

Batista made the point that his goals were to ensure accountability in his department, by discussing a ticket that he had received and how he expected to be treated to the same process that any other citizen might.He also brought up that another goal for the department is to increase community outreach and improve the perception of the department in the community.
“If we’re out and about, engage,” Batista said. “Talk to us.” Batista said that he was pushing that message internally as well, and said that “every contact we have with the community matters.” To find out more information about Mesa Morning Live visit mesamorninglive.com. 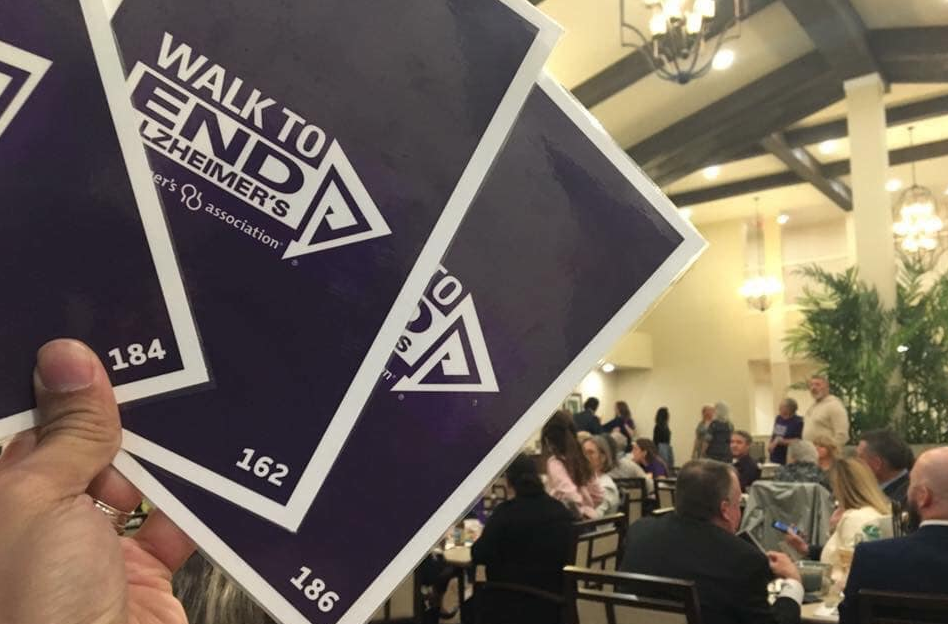 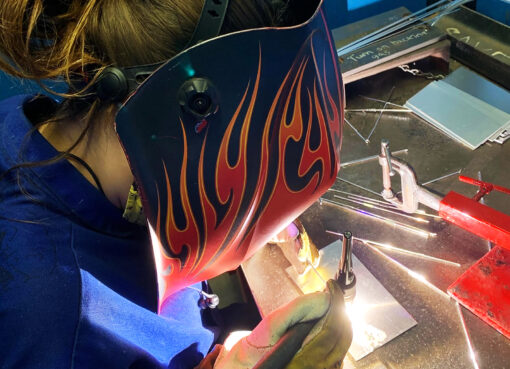 Welding and automotive Mesa Community College programs will be hybrid this fall due to COVID-19.
Read More
02/17/2015