“It’s always better to shock people and change people’s expectations than to give them exactly what they think you can do….” This part of a quote from American writer, actor, filmmaker, producer, and comedian Jonah Hill describes my emotions both before and after my family and I attended a performance of the National Comedy Theater (NCT) in Mesa. We were all sitting around and relaxing on a chilly Friday night with nothing to do and nowhere to go, so we decided it was time to shake things up and do something different.

Before I attended the event I had an idea in my mind of what it would be like. After being in Speech and Debate for a year and a half in high school, and attending various community plays and performances,  I had an idea of what I thought “improv comedy” was. NCT changed my perceptions very quickly. National Comedy Theater was founded in January 2000 by the owners of ComedySportz franchises, and in July 2000 NCT’s name began to be associated with a variety of theaters in the United States.

The first successful branch of NCT was in San Diego, and that led to the opening of a NCT location in New York City.  NCT Phoenix is the newest branch with the main stage located in Fiesta Plaza on Longmore Road in Mesa, Arizona (a couple of blocks east of Mesa Community College). A typical NCT show will feature a ref, two teams of 2-3 performers, and competitive improv games designed to be unique and interactive with lots of audience participation.
The theater is small and seating is close to the stage. It’s easy to feel as if the audience is performing also.

The audience gets to pick the games from a list of categories presented in the show’s program, and each round the teams take turns acting out the games.  At the end of each round, the crowd gets to pick the winner based on the higher level of enthusiasm (clapping, shouting, whistling, etc).  I honestly have never experienced a more interactive show than this, and it’s effective for that reason.I marveled at the talent on the stage and was a little envious at how quick and clever the performers are.  By comparison, the shows are similar to the syndicated comedy show “Whose Line is it Anyway.”

No two shows are going to be the same because it is all improvised, and as a competitive person myself, the idea of having comedy teams face off against each other makes me want to keep coming back.  And I have, and have never seen the same show twice. This shows not only exceeded my expectations, it changed what I think improv comedy is.  This is innovation at its finest, and should be on the bucket list on every person that visits the Valley. Most NCT shows are for all ages, and the shows are just the right length to have you walking out of the theatre wanting more.

There are performances every Friday and Saturday night at 7:30 and 9:45.  Tickets are reasonably priced; seats can be reserved online or you can pay at the door. There is student pricing.  They have a snack bar with popcorn, candy, and soda. Beer is also sold. For a unique family-friendly evening or for date night, I highly recommend checking out NCT’s website at nctphoenix.com and check the show schedule. Go and be ready to laugh! 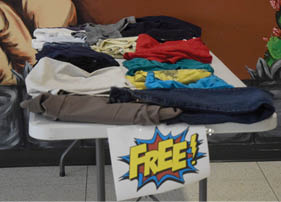 Events on campus this semester