Post-apocalyptic dystopia and zombies. It was inevitable that these two Hollywood fixations would eventually meet on the big screen and it’s no surprise they come to us in a film adaptation of a young adult novel Maze Runner: The Scorch Trials seems as though it was perfectly manufactured to ensure that teenage butts stay in the seats.

Although the world of the Maze Runner is much more engaging and intricate than its dystopian processors, it still falls victim to certain “teen movie” clichés.  Maze Runner: The Scorch Trials, the sequel to 2014’s Maze Runner, follows the continuing story of a group of teens in a (surprise) dystopian future where humanity has been almost completely eradicated by a virus known as the Flare.

Now freed from the aforementioned Maze, Thomas and his companions must locate members of the resistance in order to take down a nefarious government agency called WCKD. Sounds familiar, right? However, despite the similarities to teen dystopian films such as Hunger Games or Divergent, Maze Runner sets itself apart by justifying the role of teenagers in a civil rebellion.

Due to a biological adaptation, the youngest generation has become the key to curing the virus, but to ensure humanity’s future, sacrifices must be made.  Yet, despite its engaging world, the majority of the film is riddled with “teen movie” clichés.  Young actors providing less than stellar performances are a staple of the young adult genre. However, in Scorch Trials, the presence of older, more established actors ultimately hurt the film. 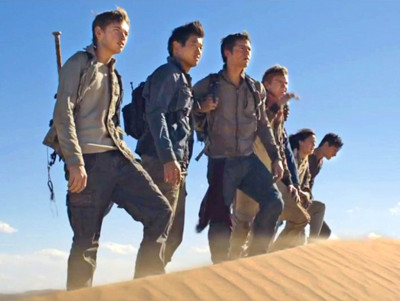 Casting Aiden Gillen fresh off his performance as the cunning Peytr Baelish on Game of Thrones, almost guaranteed an obvious reveal of him being the film’s antagonist. Gillen gave minimal effort in his role as Jansen, delivers his best Baelish impression and calls it a day.  Another ridiculous casting choice was Giancarlo Esposito as Jorge, a charismatic leader of a small Scorch outpost.  Now, it was clear that the character was intended to be Hispanic.  However, it was incredibly awkward hearing African American actor Esposito half-heartedly attempting a Spanish accent and calling everyone “hermano.”