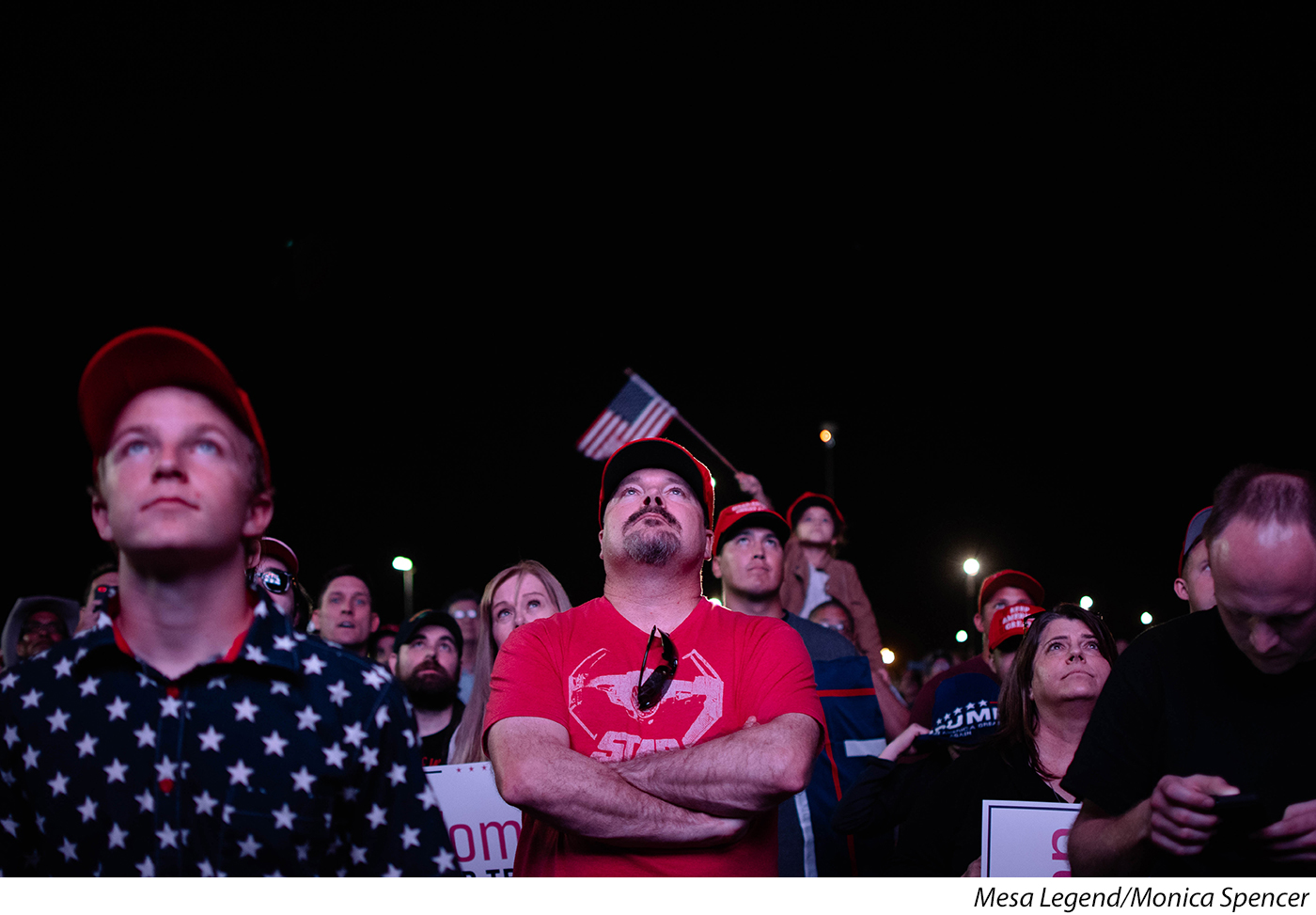 Supporters of Donald Trump watching his address to Phoenix.

Speeches commenced in the evening when Donald Trump Jr. took the stage before his father and addressed the crowd about the scrutiny his family has faced from leftist media. He said CNN portrays him as “a terrible human being.”

He said Hunter Biden “doesn’t speak Ukrainian” and his ABC interview was “terribly executed but well-planned for.” Trump Jr. continued to barrage Hunter Biden and made claims of Biden accepting billions of dollars from Ukraine.

Trump Jr. also said of the Democrats and the Iowa Democratic Caucus: “They want to take over healthcare. In all fairness, they couldn’t count the votes in Iowa.”

In his speech, Trump Jr. labeled Democrats as “the Communists.”

After Trump Jr. bowed out the crowd waited in anticipation to hear from President Trump. At long last, he walked on to “God Bless the USA” by Lee Greenwood. The crowd erupted into roarious applause and into chants of “four more years” and “USA.” Trump expressed his gratitude to the thousands of Arizonans.

In his two hour speech, he boasted of his administration’s main achievements, such as a prosperous economy, supplying Americans with 200,000 new jobs, and building a powerful military.

When he addressed impeachment he called it “unfair and ridiculous witch hunts” and “partisan democrat crusades.”

“It was the radical left’s pathetic attempt to nullify your ballots, poison our democracy, and overthrow our entire system of government,” said Trump.

Trump later brought Arizona Senator Martha McSally on stage and endorsed her campaign bid for senate which is up for election in November. Trump denounced Democratic Senate challenger Mark Kelly and his focus on key issues like gun control and Kelly’s endorsement of presidential candidate Bernie Sanders.

Both of them also called the media present inside and outside the coliseum “fake news” and the “liberal hack media.”

After the speech, many in the crowd were elated and empowered. 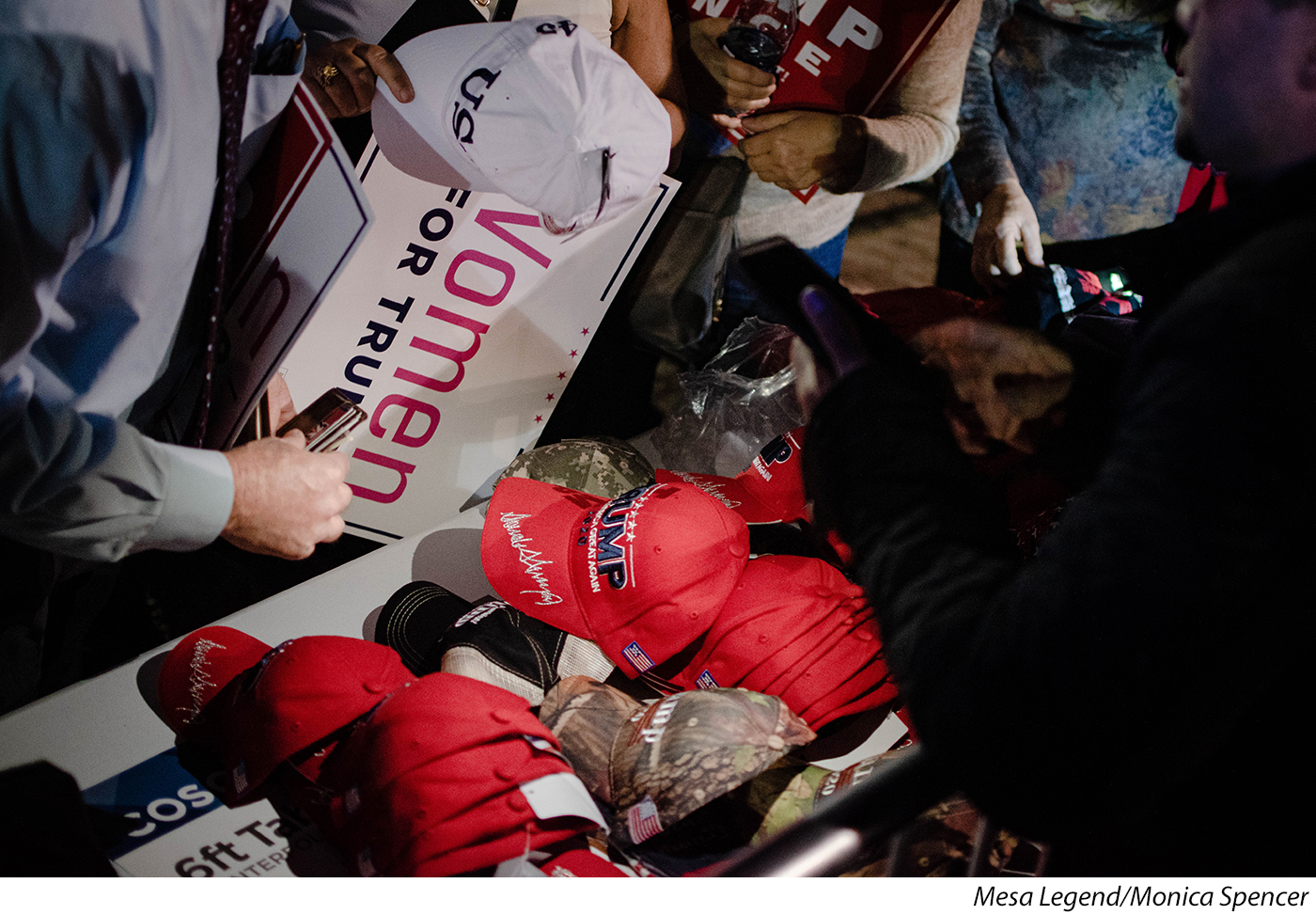 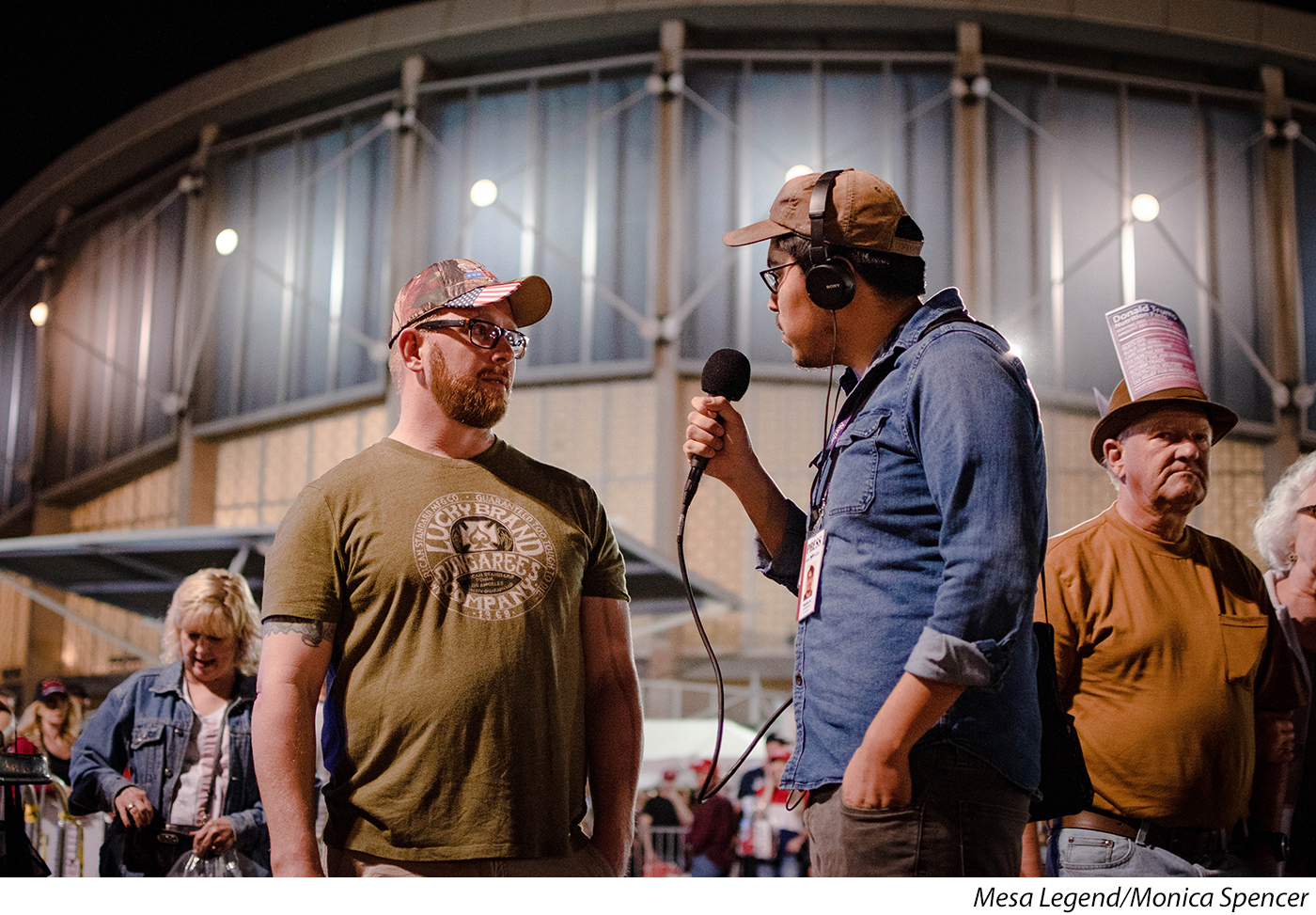 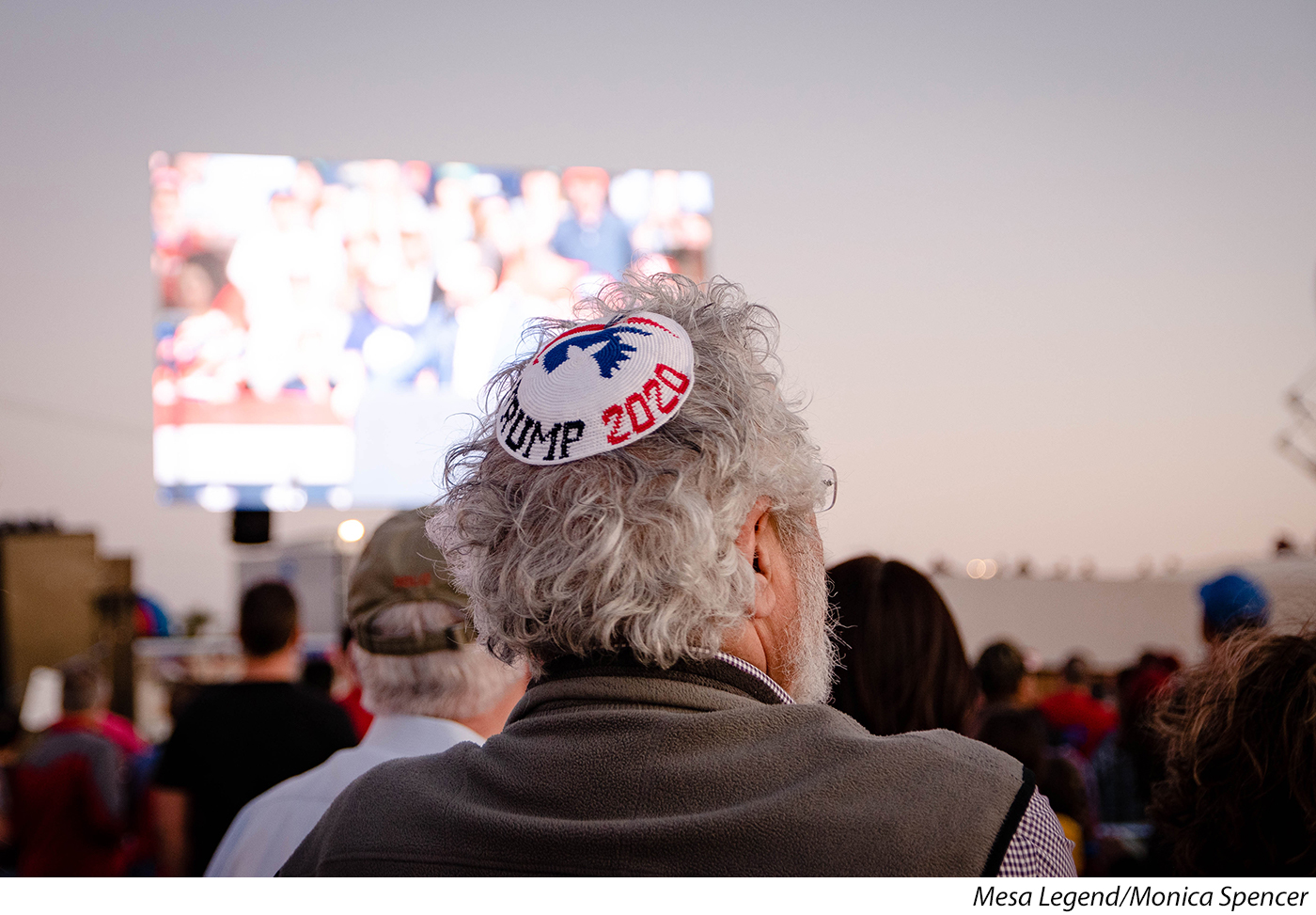 “I thought it was great. He addressed the importance of the people, he showed that he was there for us and he wants to protect our country and make it better,” said supporter Daniel Koty.

A young woman named Emma said his speech was “great, powerful, and unifying.” She said the points Trump made about the success of minorities and women succeeding under his presidency resonated with her the most.

When Trump supporters and protesters eventually clashed in the barricaded “Free Speech Zone” on Encanto Boulevard, many exchanged harsh words and police were there to keep the peace. The scene was extremely charged, but no one was hurt.

“Right now, it seems like he’s working for Putin because he’s happy to spout Putin’s propaganda,” said Mike, who protested because he believed Trump is a danger to the United States and the U.S. Constitution.

“We’re standing up to be counted and to voice the opposition and the truth,” said Robin. “This administration is so corrupt, I can’t just sit home anymore, I have to do something.”

Robin said she has been calling her senators and going to protests because she feels that something needs to be done about Trump’s actions.

“We really feel that the fate of democracy is hanging by a thread,” said Frank. “We need to make sure that we represent it.”

Sharon said her number one political issue is climate change and her second is healthcare.

“I have a 22-year-old son. I’d like to see him grow up in a world that doesn’t have the issues that we’re facing now with climate change.”

Some protesters covered their faces to remain anonymous and they needed to be aware of facial recognition.

Many Trump supporters did not want to be interviewed and asked, “Which side are you on?” when approached. Supporters who talked expressed strong views in favor of Second Amendment rights, increased border security, and securing freedom of expression and speech.

Earlier in the coliseum parking lot, a line of Trump supporters wrapped through the lot and many waited up to two hours in line.

A Native American Mesa Community College (MCC) student had been waiting in line for 1 ½ hours in support of President Trump. She said this was her first time seeing him in person.

“I am pro-American. I don’t think everyone else is for America,” said the MCC student.

She stated socialism is never a good idea and made the comparison of implementing a national socialist healthcare system to the current Navajo Nation healthcare system, which is said to have extremely long wait times for care.

She also did not agree raising taxes is the solution to funding healthcare and education in the U.S.. 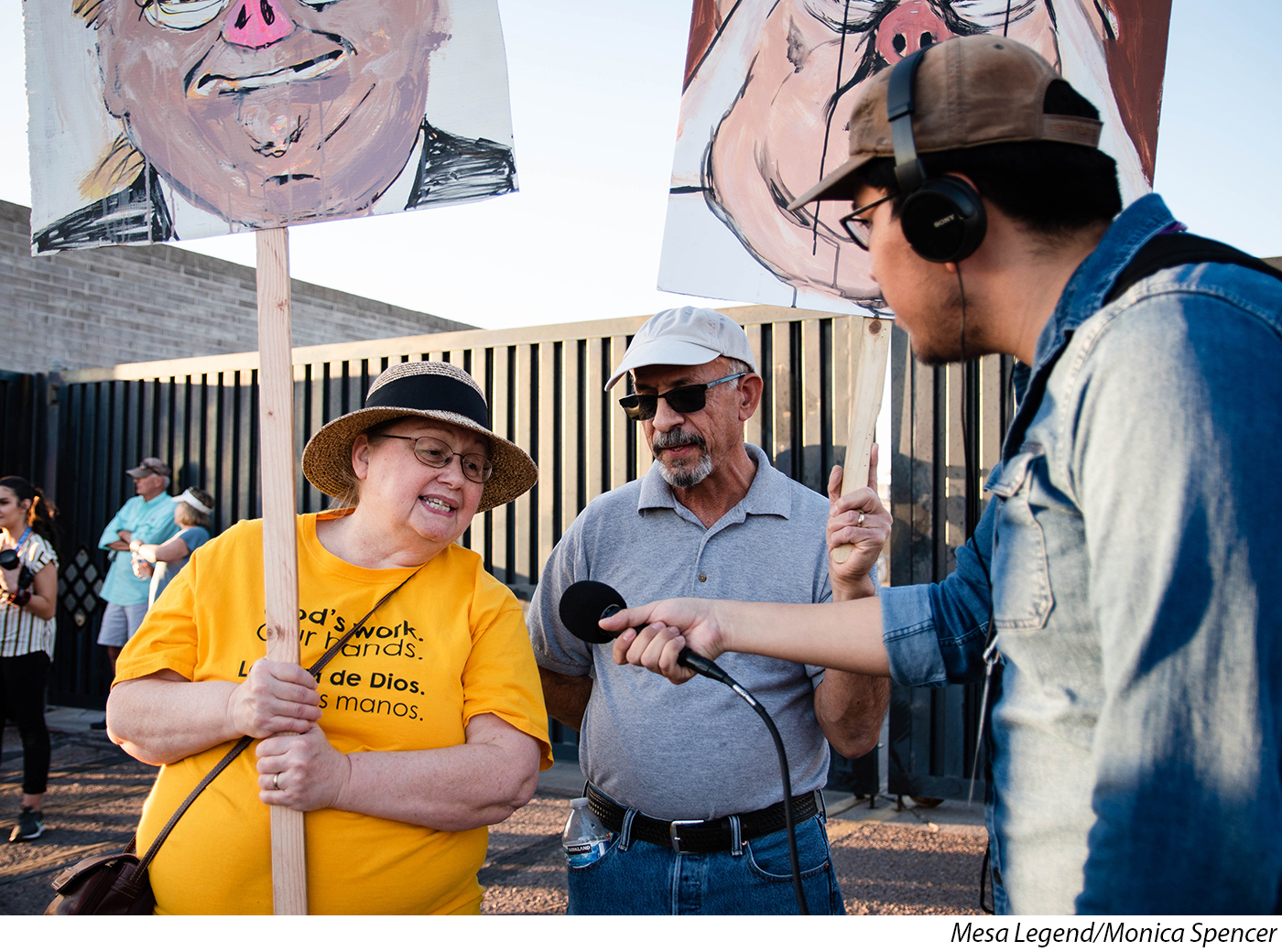 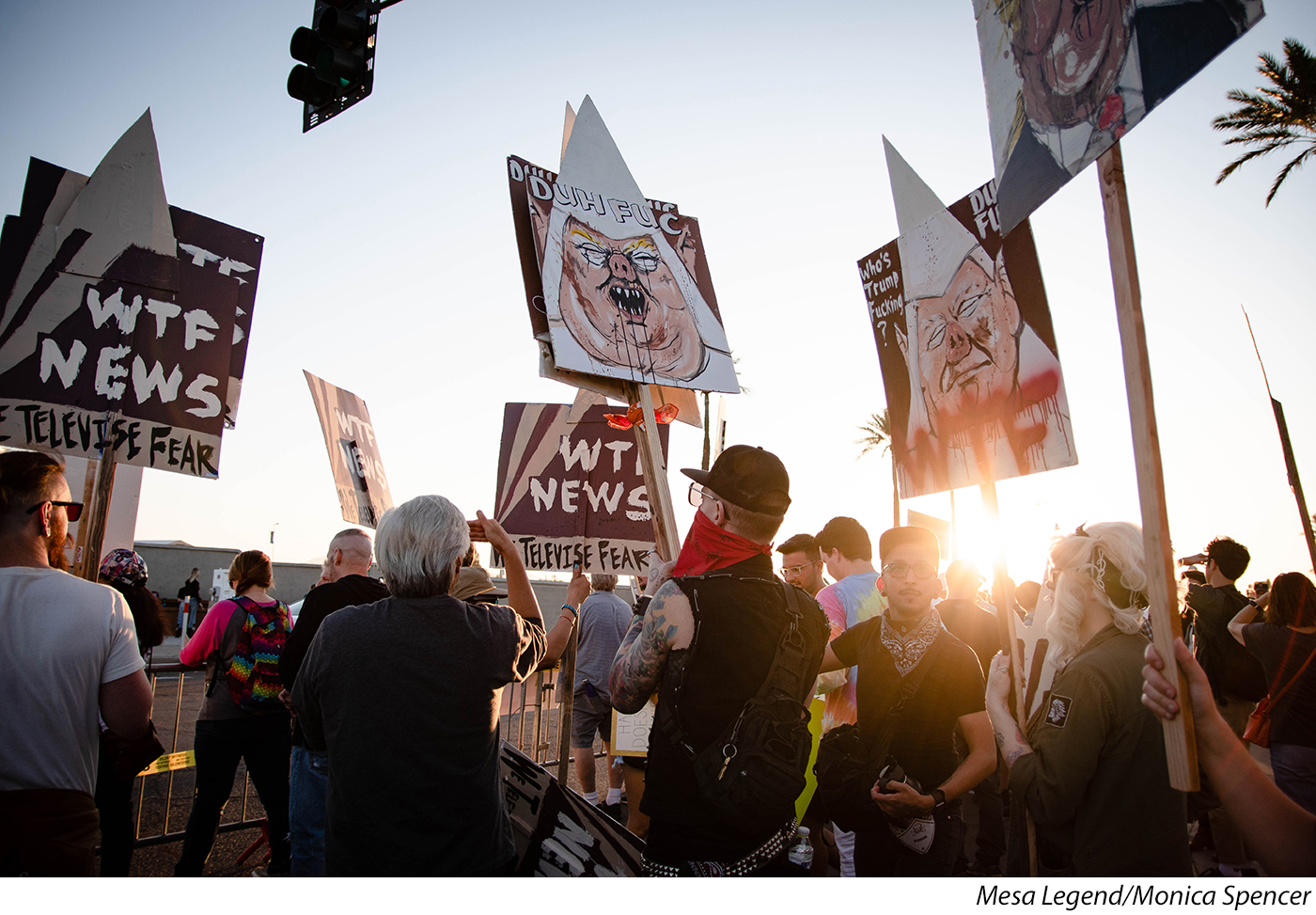 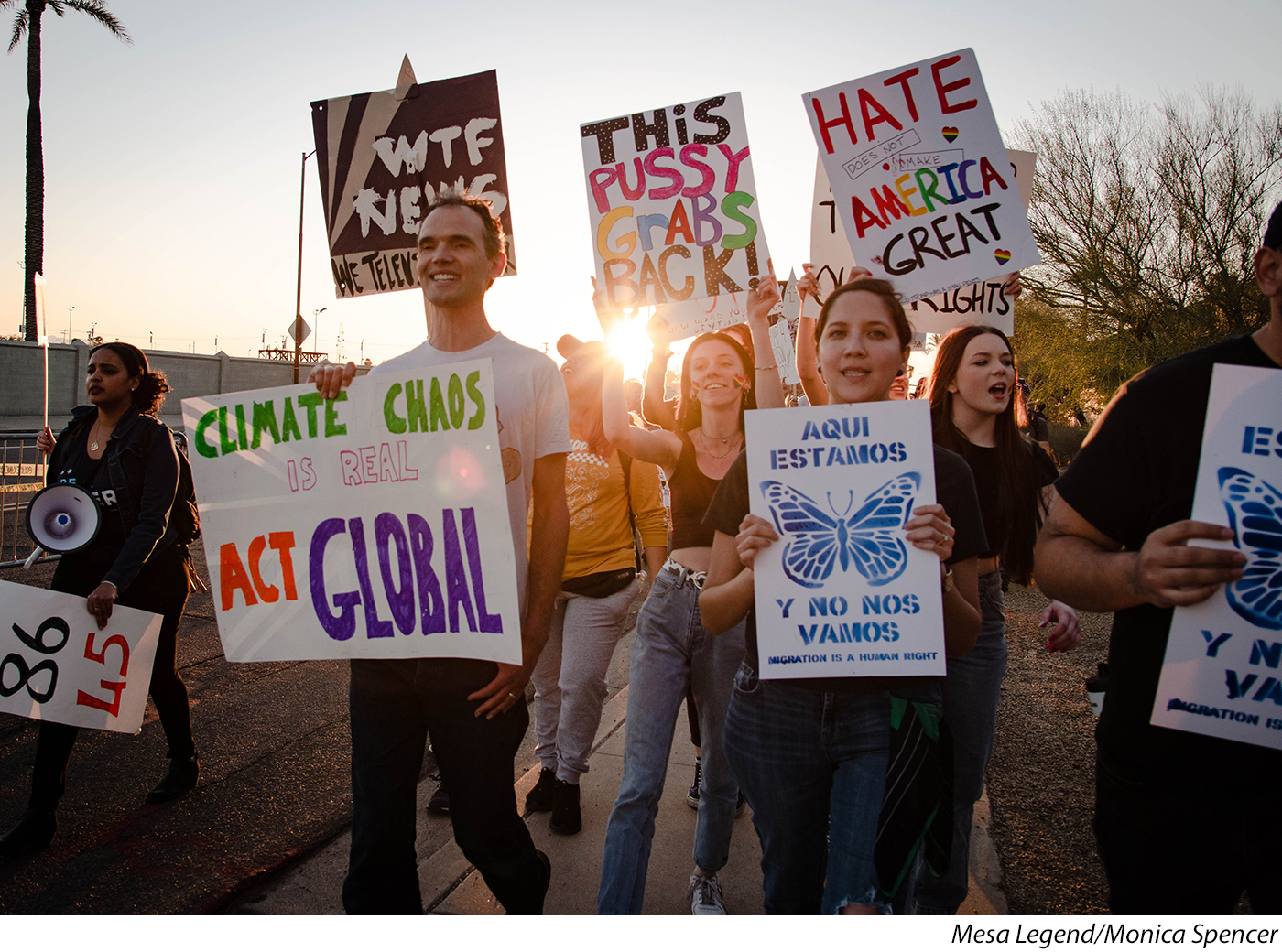 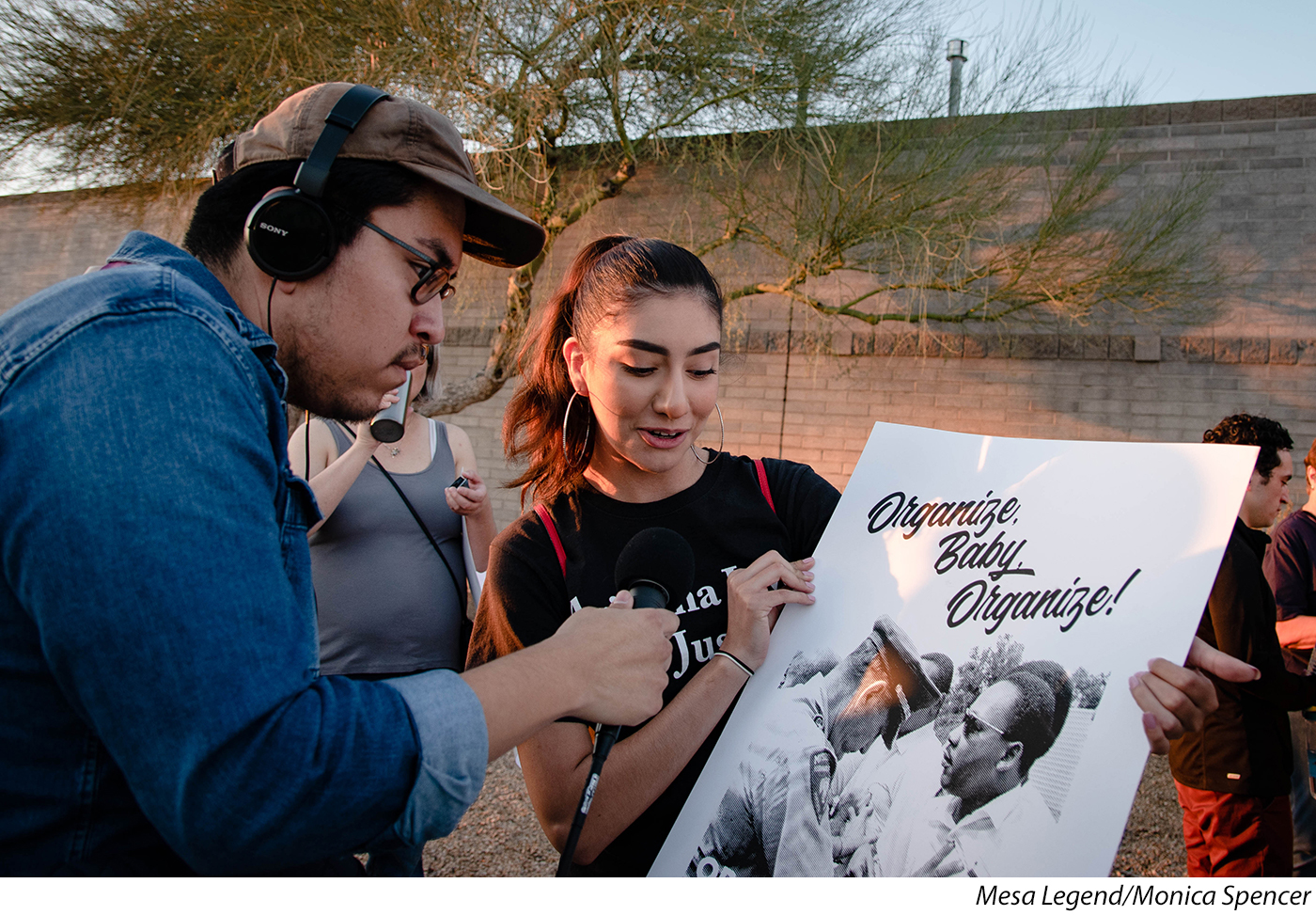 “I don’t think taxing people is the right way to go about it. You’re targeting the middle class, which is disappearing, and everyone wants to tax the rich, but they’re the ones providing all the jobs for people.”

“He is fighting for equality not just in America, but worldwide. He’s the first president to make it illegal to persecute gays,” said Omar.

Omar also stated, “He’s the first pro-gay president that ran for president and announced he was pro-gay marriage and got elected president. No president has ever done that before.”

According to Omar, Hillary Clinton did not endorse same-sex marriage while running for president for her first time in 2008 and Former President Barack Obama did not endorse it until his second term.

However, last June, President Trump came under fire from Chad Griffin, the president of the Human Rights Campaign, an organization that champions LGBTQ Rights in the U.S..

“You can’t celebrate Pride and constantly undermine our rights — including attacking #TransHealth, discharging #TransTroops, refusing to protect LGBTQ youth, and cozying up to dictators who brutalize & marginalize LGBTQ people,” Griffin said on Twitter.

This was a response to Trump’s tweet in June 2019 that said that his administration stood “in solidarity with the many LGBT people who live in dozens of countries worldwide that punish, imprison, or even execute individuals on the basis of their sexual orientation.”

By: Paige Baker  A rise in the production of merchandise designed to prevent sexual assault has attr
Read More 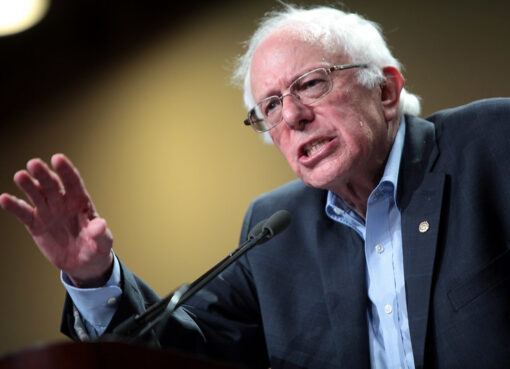 Bernie Sanders has announced his presidential campaign for 2020. With his sights set on the Democrat
Read More