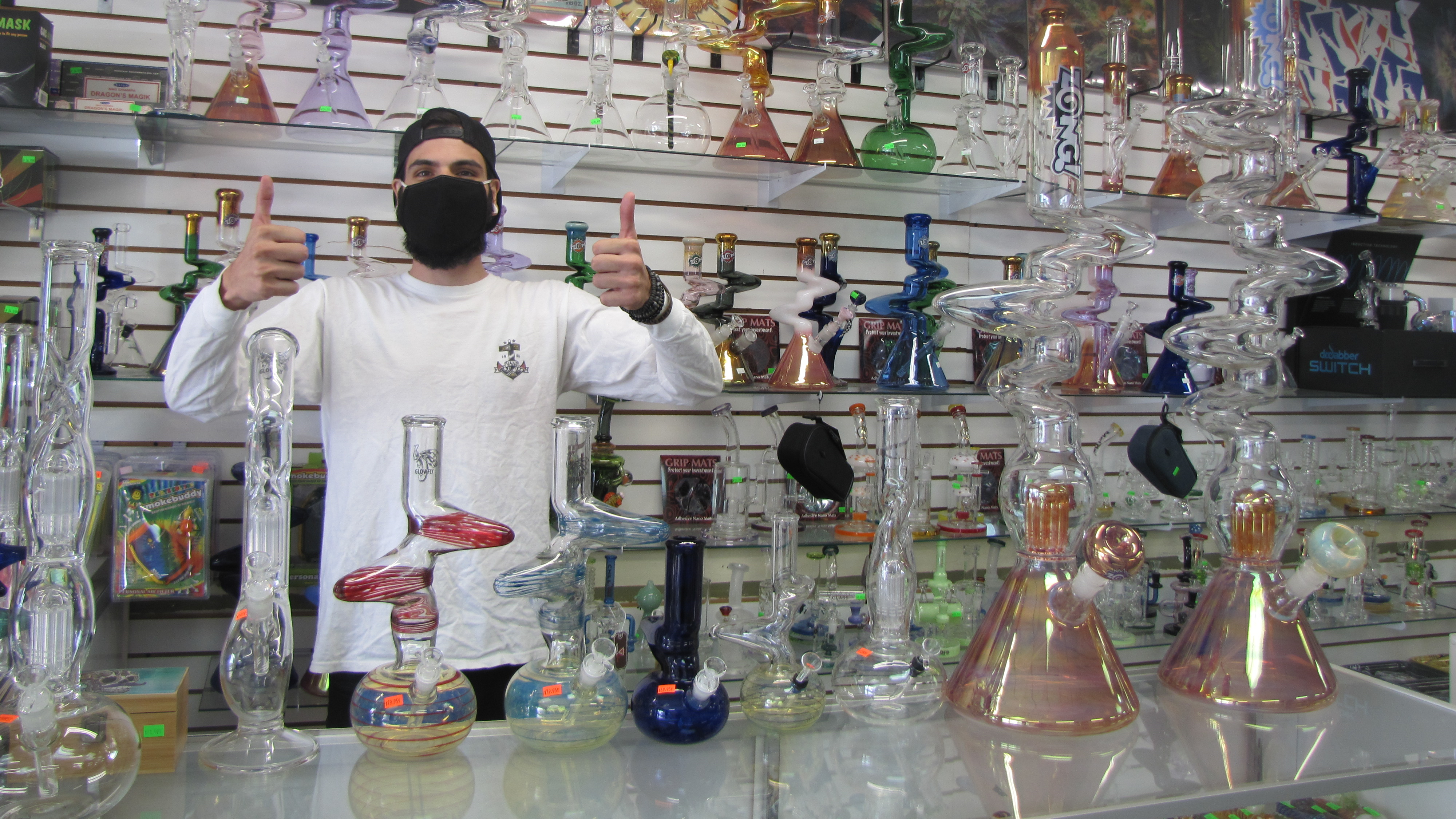 Shops like Zong Smoke and Vape, where Ben Arias, pictured, works, will be the subject of upcoming legislative changes in Proposition 207, such as increased age restrictions on the purchase of marijuana related paraphernalia. Photo by Brock Blasdell.

Arizona voters will decide on Nov. 3 if legislative Proposition 207, which seeks to legalize recreational marijauna use for Arizonans over the age of 21, will become law. The proposition, also known as the Smart and Safe Act, has been at the center of a contentious debate between some of Arizona’s most powerful influencers and community members.

Notable actions of this legislation include the following: the legalization of marijuana use inside private homes; expungement of criminal records related to use, transport and possession of marijuana; and changes to the legal processes of enforcing marijuana-related crimes. It also establishes the Smart and Safe Arizona Fund, which will collect and administer funds derived from the sale and licensing of marijuana for causes like public health, education, infrastructure, legal fees related to criminal record expungement, and the regulation of Arizona’s marijuana industry.

As of Oct. 17, 2020, funding in support of Proposition 207 totals $5.47 million. Funding comes primarily from marijuana firms and businesses. Top contributions include $1.425 million from Harvest Enterprises Inc., $750,000 from CuraLeaf, and $300,000 from Copperstate Farms LLC, among other donations of big name marijuana brands. This money is filed through Smart and Safe Arizona, a PAC led by former Arizona Rep. Chad Campbell, D-24.

“I have read the Safe and Secure Arizona Act and am very pleased with the way it has addressed legitimate concerns raised with the 2016 proposition. The authors have also incorporated successful provisions from other states so we can benefit from their experience,” Campbell wrote in a public letter of support for the proposition.

“MCDP proudly stands behind Proposition 207 because it is expected to raise $300M in tax revenue for community colleges, public safety, public health programs, and infrastructure. Most importantly, it will provide prosecutors with increased discretionary authority to dismiss petty marijuana possession cases, thus significantly reducing the number of people sent to prison for these low-level crimes. Last, it creates a pathway for those previously charged with marijuana-related crimes by permitting a petition of their criminal records’ expungement. This policy solution allows thousands to live their lives without the fear or stigma of a criminal background. We’re proud to support Prop. 207 and are encouraging all eligible Arizona voters to vote yes on this proposition.”

Other notable supporters of this proposition include: former Arizona Gov. John Fife Symington III, Arizona Attorneys for Criminal Justice, and the Arizona Dispensaries Association. It should be noted that any voter initiated proposition passed in Arizona is nearly unalterable by Arizona’s legislature under the regulation of the 1998 Voter Protection Act.

Opponents of the proposition are primarily working through the Arizonans For Health and Public Safety, a non-profit organization, and have raised $833,338 in campaign funding as of Oct. 17, including $240,351 from the Center for Arizona Policy Action. Influential opponents of Proposition 207 include Ann-Marie Alameddin, president and CEO of the Arizona Hospital and Healthcare Association, Glenn Hamer, president and CEO of the Arizona Chamber of Commerce & Industry, and current Arizona Gov. Doug Ducey.

In a statement of opposition citing concerns about road safety, drug abuse prevention, and the protection of Arizona’s children, Ducey said, “Arizona has a bright future, but fully legalized marijuana doesn’t need to be part of it. The current system with medical marijuana is serving the people who need it for health-related reasons. We don’t need the wholesale expansion that full-throttle legalization will bring…”

Other opponents, including Lisa James, chairperson of Arizonans for Health and Public Safety, and Todd Griffith, former director of the Arizona State Crime Lab, have issued statements to the Arizona Republic citing “the toll marijuana and other drugs take on individuals and their families” and rallying for Arizonans to “ignore what Big Marijuana says about the proposition they wrote.”

A similar Arizona proposition, Proposition 205, failed to pass in 2016 with 51.3% of voters opposing the measure. Other states like California, Nevada, Maine and Massachusetts passed legislation to legalize recreational marijuana in 2016.

Proposition 207 differs from Proposition 205 in many ways. Most notably it has changed the legal limit of marijuana which can be consumed before driving to anything that will impair a driver’s abilities “to even the slightest degree”. Opponents of the measure have argued this language is disingenuous in letters publicly available on the Arizona Secretary of State’s website, and that they open the floor for legal debate as officers are forced to make judgement calls about impairment while on the scene of marijuana related driving incidents.

Stipulations for legal and recreational marijuana use under Proposition 207

As stated in Proposition 207, all individuals over the age of 21 are lawfully allowed to use, possess, transport and limitedly cultivate marijuana. Moreover, marijuana use cannot be used as the sole reason for “detention, search or arrest.” and it cannot serve as the sole basis for seizure of assets, the imposition of penalties or the “limiting any right or privilege conferred or protected by the laws of the state or any locality.”

In addition, no individual may purchase, transport or cultivate marijuana or its related paraphernalia for any person under the age of 21. No person may consume marijuana while in public, nor in the passenger’s seat of a vehicle. Private businesses are left to decide their own course of action for marijuana use on their premises.

Proposition 207 does not restrict the rights of employers to maintain a drug free workforce and workplace, and does not require employers to make accommodations for those who would legally use recreational marijuana.

All individuals who work at a marijuana dispensary will still be required to apply for licensing every two years to maintain employment.

In addition to the use of recreational marijuana, Proposition 207 also reclassifies every “compound, manufacture, salt, derivative, mixture or preparation of the plant…” as marijuana. What this means is that concentrates that were formerly considered more illegal are now classified in the same way that marijuana is and must be treated as such in legal instances.

Industrial hemp will not be considered marijuana under Proposition 207.

Should Proposition 207 pass, an amendment will be made to the medical marijuana fund. This amendment will require the fund to provide large amounts of money immediately to the following causes: $15 million to the Arizona Teachers Academy Fund, $10 million for the formation and operations of various organizations dedicated to improving public health, $10 million to the Governor’s Office of Highway Safety to conduct training and buy equipment dedicated to traffic enforcement, $2 million to the department designated to enforce law surrounding recreational use of marijuana, $4 million to qualified non-profit agencies assisting in outreach and criminal expungement, $2 million to the develop “social equity ownership programs” for communities impacted by past marijuana legislation, and more.

A 16% excise tax will be placed on retail marijuana sales in addition to sales tax. Taxes and related revenue collected from the sale of marijuana, licensing and its fines go to the Smart and Safe Arizona Fund. Any money placed into this account cannot be used for anything other than the stipulations listed in Proposition 207, and they do not recycle back into the state general fund at the end of every year.

All money generated through the licensing, sale and manufacturing of marijuana is specifically designated to maintain the departments which will enforce marijuana regulation. All funds leftover after this maintenance cost will be distributed as follows: 33% go to community college and provisional community college districts; 31.4% go to municipal police departments, fire departments, fire districts and country sheriffs’ departments; 25.4% will go to the specially designated Arizona Highway User Revenue fund defined within the proposition; 10% will go to the Justice Revenue Investment Fund defined within the proposition, and the remaining will go to the Attorney General to enforce newly created provisions.

Any additional funding provided to these organizations by the Smart and Safe Arizona Fund cannot “supplant, replace, or cause a reduction” in spending already allocated. Basically, this money cannot be used as a replacement of funding, and must be given as an additional source to all the organizations listed.