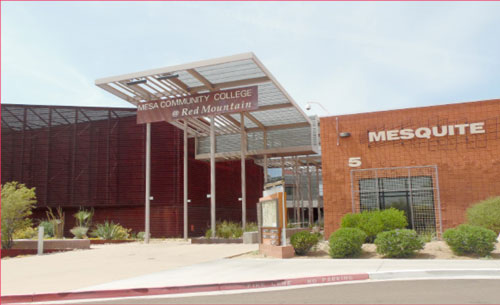 Mesa Community College’s Red Mountain campus celebrates 15 years of leading the way as an environmentally friendly college campus. After receiving multiple awards such as the LEEDS Gold Certification, As well as being recognized by the National Wildlife Federation (NWF) as part of the Garden for Life program. The East Mesa campus began construction in 2001, however, was not finished until 2002. Built on 98 acres of the Sonoran desert and from the beginning of its heritage, Red Mountain has kept to a certain “environmental ethic” Dr. Dennis Wilson said.

Dr. Wilson is a biology professor on campus who was instrumental helping to establish the eco-friendly culture at Red Mountain over the past years since beginning to work there. “There’s been an ethic that we’ve designed this campus around, which is this environmental ethic. In other words, embracing the natural world around the grounds that we’re in,” Wilson said. He emphasizes the campus is unique because of its incorporation of the local geography versus the typical repurposing of the land.

At the south end of campus sits the beautiful Saguaro building, the newest edition on campus. The mindset of the construction shows how very different the Red Mountain administration deals with construction versus that of other college campuses.  The Saguaro building serves as a very diverse center housing not only four biology labs, the performing arts center, and the staffing offices, but also a special type of life. This building gives a diverse meld of both science and music. 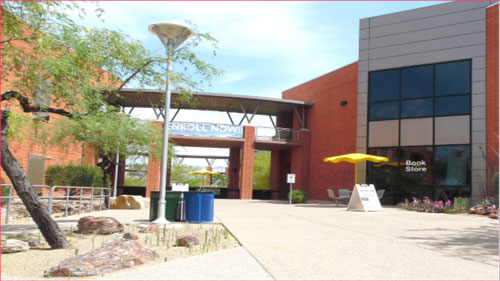 Professor Griffin Logue also spoke out about the wildlife housed in the various throughout locations on campus. “Part of the focus here is to display these animals that first off people don’t commonly have interaction with, but also there’s a lot of negative connotation around”.  Logue emphasized the more contact people have with these animals, the more they become attached to them.

The attachment Red Mountain has tried develop with the wildlife and the local community helps the national environmental effort to preserve wildlife. This relationship is developed through furthering the communal knowledge of the surroundings is quintessential in the personalization of local conservation efforts we can make in our own lives. The simple phrase “knowledge is power” has been the motto of the Red Mountain administration and teaching department for the past 15 years since the campus’s installment.

Red Mountain also has stepped into playing a role in the lives of the endangered species life in Arizona. After teaming up with the Arizona Game and Fish department and the United States Wildlife department, the Cienega located in the very heart of the campus became used as a sanctuary for two distinct types of endangered fish life. The Cienega has become an official breeding ground to aid these two types of fish to replenish their number so they can later be placed back into the wild.

Wilson explained, “We’re acting as a reserve site for these endangered species because their natural habitat is disappearing. So, to preserve them we’ve got these non-natural ecosystems where have different populations, and we’re one of them!” The campus is only one of few institutions in the entire state to fill this role as a refugium as Dr. Wilson explained. This adds to the prestige of the North American Native Plant Society Founders award given to Red Mountain above all candidates in the US, for the conservation efforts to maintain the desert life as sustainable as possible. In early 2016, Red Mountain again was praised as a Certified Wildlife Habitat.

“Let’s manage for conservation, not necessarily a manicured lawns.” Wilson chimed. The usage of xeriscaping has been part of the campus culture since the beginning of construction, and by using all natural and native plants which require much less supplemental watering the campus conserves about sixty percent more water than the traditional college campus of its size.

Vice Provost Nora Amavisca Reyes spoke about the learning opportunities the college has been providing through this mentality of keeping things close to nature. “It is a great opportunity to educate others” Reyes added. “Even I myself am being educated. We have incredible, passionate experts in these areas here on campus.”

The conservative effort of the administration has not always been easy to defend however the ethics have never been compromised. Reyes admitted, “We have had changes in grounds maintenance and this is an ongoing commitment that we have as a campus. We have challenges that are posed and arise and we have to confront those challenges to again go back to that ethic underlying why we’re doing what we’re doing.”

Red Mountain has shown us for the past 15 years that the effort to aid our planet is more important than any single award or recognition. Their consistent effort has been shown and should be taken as a lesson to the local community to help support the native environment of our beloved Mesa. Mesa Community College has taken a great step in the right direction over the past years, and by educating its students to respect the plants and animals surrounding the hectic campus life.